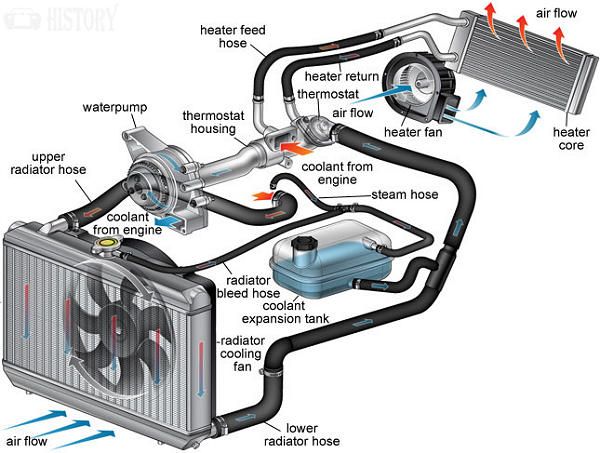 Anti-Freeze - Coolant: The fluid in your cooling system is used as a way to dissipate the tremendous amount of heat an internal combustion engine creates. Most new vehicle have an optimum operating temperature of around 200 degrees Fahrenheit or about 93 degrees Celsius; water boils at 212 degrees Fahrenheit, or 100 degrees Celsius and freezes at 0 Celsius or 32 degrees Fahrenheit. That is where Ethylene Glycol comes in; it is used as a stabilizer to help keep the mixture in the cooling system from boiling or freezing depending if the vehicle is in use.

Water Pump: The water pump is a mechanical pump that circulates the engine coolant/anti-freeze through the radiator and back to the engine. Since they are mechanical pumps, they are usually driven by an accessory drive belt or by the timing belt-chain (depending on the vehicle).

Thermostat: the thermostat is a temperature sensitive orifice in the cooling system that opens and closes according to engine temperature to regulate the flow of coolant-anti-freeze through the radiator and back to the engine. This allows for the engine to be run at specific temperatures to optimize the performance and emissions levels of the vehicle.

Radiator: The radiator is basically a finned box mounted at the front of the vehicle that the coolant is forced through so that air may pass across it and cool the anti-freeze-coolant. They are covered in fins that act as heat syncs to help dissipate the heat.

Cooling Fan: The cooling fan is located directly behind the radiator, whether the vehicle is front or rear wheel drive. Its job is to pull air through the radiator at lower vehicle speeds to keep it from over-heating. Cooling fans can either be mechanical (belt driven on the engine) or electric (mounted on the radiator, temperature controlled)

Drive Belts-Hoses: All of the antifreeze-coolant in your vehicle is pumped through several hoses. Maintaining them is crucial to preventing serious engine damage from over-heating. Visually inspect thehoses for leakage, cracks or abrasions and the general integrity of the hose; they should be slightly pliable when squeezed with your fingers. Replace any that are questionable. Theserpentine belt should be inspected regularly as well.

The engine's combustion chamber can reach temperatures of up to four thousand five hundred degrees Fahrenheit. About thirty percent of the fuel is converted into actual power, and about seventy percent is spent into heat. A cooling system protects an engine from damage by transferring heat to the atmosphere by using the radiator. A correct operating temperature is critical for the proper function of the engine. The thermostat controls when coolant is allowed to flow into the radiator and back into the engine.

car manufacturers have found that a 195 degree thermostat is optimum for efficiency. Below this threshold the catalytic converter will not work to capacity and will produce increased emissions. The water pump circulates the coolant from the engine to the radiator where it is cooled. Automatic transmission vehicles utilize a fluid cooler inside the engine coolant radiator. This cooler is use to cool the transmission fluid that has been heated from normal usage.

Engine coolant is used to transfer heat from the engine to the radiator by the cooling system. The radiator removes heat from the coolant by forcing air through the radiator fins. Without coolant your engine will overheat and if left unattended, severe engine damage will occur. Coolant colors can vary from green, orange, blue and yellow each having their own protective properties. (Note: coolant and antifreeze refer to the same product, in below freezing, coolant lowers the freeze point hence the name anti-freeze and in warm weather coolant helps raise the boiling point, "coolant")

A water pump is used to circulate water throughout the engine block, cooling and heater systems. The water pump is driven by the engine via serpentine in most cases. When a water pump fails it can produce a squeaking or rattling sound. Also, a water pump can leak engine coolant through a relief port that allows coolant to pass when the shaft seal fails. This port is created so engine coolant will not contaminate the shaft bearings causing a worst problem. If a failing or failed water pump is allowed to operate it can cause the engine to overheat or completely fall apart causing cooling system or other internal engine damage.

The water pump circulates coolant continuously, a thermostat is used to control the rate of coolant flow through the cooling system . A water pump is comprised of a main housing body, flange, main shaft, bearings, impeller, seals and a gasket to seal in against the block. When engine RPM increase so does the water pump flow rate. A water pump will typical last between 60,000 and 100,000 miles. When replacing a water pump always insist on high quality replacement parts to avoid premature failure. To check your water pump condition, make sure the engine is off, next grab a hold of water pump flange and try to move it back and forth. There should be little to no play in the main shaft bearing. If excessive play exists the water pump has failed and needs replacement.

Inspecting your water pump is another small thing that can save you big down the road. If the accessory drive belt drives your pump then you have it a lot easier. Look down the pulley for mis-alignment; this can be an indicator that the bearing is going out, letting the pulley move under the belts tension. Most water pumps have what is called a “Weep” hole; the weep hole lets coolant out that is making it into the bearing area of the pump, thus creating the leak we see on the ground. If the pump is driven by the timing belt or timing chain, then inspection can be a lot tougher. Look for dried fluid under the pump area as well as fresh fluid. Water pumps can be tricky; sometimes they will only leak if the engine is running, so when the fluid leaks out it either dries on the engine or is blown away by the air circulating under the vehicle.

The thermostat in your vehicle is what regulates how fast the engine warms up and at what operating temperature it will run. Warming the engine up is very important due to the different expansion rates of all the internal parts (aluminum, steel, cast iron and rubber seals). If anengine is running too cold, the tolerances within are not correct and damage may ensue. Just as important is that the engine runs at the proper temperature. Today’s vehicles are designed to run anywhere between 200-220 degrees Fahrenheit, it is the thermostats job to regulate the fluid flow through the radiator to keep the temperature at a predetermined level. Most fuel injected vehicles use a 195-degree thermostat, so by 200 degrees it is fully open and letting the fluid flow through the radiator and back to the engine.

In the beginning, water was used for cooling systems, as it is the most efficient fluid to absorb and dissipate heat. The disadvantage of using water is that it freezes, boils, and will cause rust. Then water was mixed with ethylene glycol, which worked as an anti-freezing agent, it also increased the boiling point of the mixture dramatically. Ethylene glycol can be heated up to 250°F before becoming ineffective. The cooling system is pressurized to 18 psi. to increase coolant boiling point which adds 9 degrees Fahrenheit to the boiling point of the coolant.

This fan clutch is constructed using a silicone grease and temperature sensitive coil spring that expands and contracts with heat. As the spring absorbs heat it expands engaging the clutch fan utilizing engine power to drive the fan. A clutch fan can fail one of two ways, it can either be locking the fan to the clutch causingpoor mileage and awhirring sound, like an airplane is taking off next to you. Or the silicone grease can start to leak causing the fan clutch not to lock up allowing the fan to "freewheel", failing to pull air through the radiator.

To inspect an electric motor cooling fan start withignition key off, engine off. Spin the fan blade; it should "freewheel" if the fan motor does not spin it has failed and needs to be replaced. If the fan motor "freewheels" the electrical system that operates the fan needs to be tested. Start the engine and turn the air conditioner to the coolest setting, if your car does not have an air conditioner skip this step.

Within three minutes of operating the carsair conditioner the cooling fan should activate, if not the fan motorfuse must be checked first, if the fuse condition is ok the remainder of the electrical system must be checked. To further troubleshoot this problem a wiring schematic is needed which is located in a service manual. Use the wiring schematic to trace the circuit through the fuse andrelay components, if everything tests ok the fan motor has failed and needs to be replaced..

The radiator in your car is where the actual cooling of the engine occurs via heat transfer. Engine coolant is forced through the radiator where it is run through small aluminum tubes with cooling fins. These aluminum tubes direct the flow of coolant through the radiator and act as the conductor by which the heat is dissipated. The amount of heat transferred from the coolant depends on the surface area of the core. The radiator cap acts like a pressure release valve, as the pressure increases due to heat, the cap allows the excess coolant to enter the reservoir. Then, when the engine has cooled the coolant will return to the radiator. Most radiators are made of an aluminum core and plastic side tanks, but in older vehicles they may be an all-metal construction.

Part of any routine maintenance schedule should be the inspection of the cooling system hoses. When visually inspecting the hoses there are a few things to look for:

Oil saturation
Cracks
Abrasions (from contact with moving parts)
Seepage
Clamp tension
Now that you have visually inspected the hoses, it’s time to give them a squeeze. Hoses can deteriorate internally, they should feel firm, if too pliable then replace, the same goes for too hard. Regardless of condition it is a good practice to replace them at the manufacturers suggested intervals

Low levels of coolant can lead to problems related to engine overheating. Always maintain proper levels of coolant in the overflow coolant reservoir tank. ONLY! Check the radiator when the engine is cold. Only add antifreeze and reinstall the cap properly. Always drain and refill your cooling system regularly.