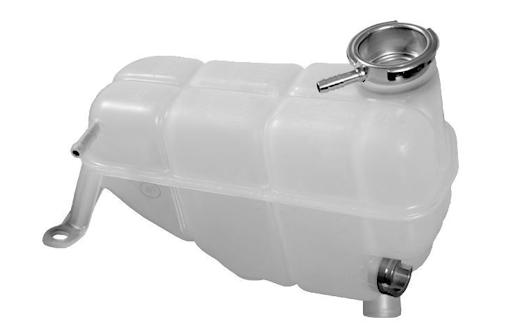 An expansion tank is also used in the cooling system of most internal combustion engines, to allow the antifreeze and air in the system to expand with rising temperature and pressure.

The modern vessel is a small container divided in two by a rubber diaphragm. One side is connected to the pipe work of the heating system and therefore contains water. The other, the dry side, contains air under pressure, and normally a Schrader valve (car-tire type valve stem) for checking pressures and adding air. When the heating system is empty or at the low end of the normal range of working pressure the diaphragm will be pushed against the water inlet. As the water pressure increases, the diaphragm moves, compressing the air on its other side.

An older style of expansion tank was larger, oriented horizontally, and had no rubber diaphragm separating the water from the air pocket. This now obsolete style would gradually transfer air from the tank to the highest point in the system, due to air dissolving in the water, and then coming out of solution elsewhere in the system. This in turn required regular draining of the expansion tank, as well as regular bleeding of the system, to maintain its effectiveness.

The rubber diaphragm in modern expansion tanks prevents this undesired transfer of air, and helps maintain low levels of oxygen, reducing corrosion in the system.