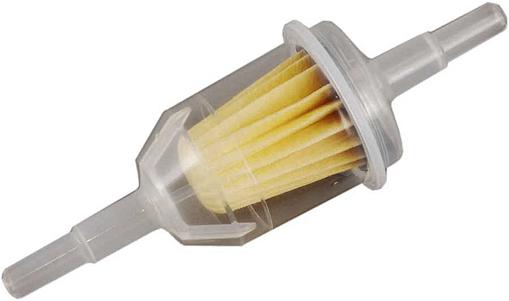 A fuel filter is a filter in the fuel line that screens out dirt and rust particles from the fuel, normally made into cartridges containing a filter paper. They are found in most internal combustion engines.

Fuel filters serve a vital function in today's modern, tight-tolerance engine fuel systems. Unfiltered fuel may contain several kinds of contamination, for example paint chips and dirt that has been knocked into the tank while filling, or rust caused by moisture in a steel tank. If these substances are not removed before the fuel enters the system, they will cause rapid wear and failure of the fuel pump and injectors, due to the abrasive action of the particles on the high-precision components used in modern injection systems. Fuel filters also improve performance, as the fewer contaminants present in the fuel, the more efficiently it can be burnt.

Fuel filters need to be maintained at regular intervals. This is usually a case of simply disconnecting the filter from the fuel line and replacing it with a new one, although some specially designed filters can be cleaned and reused many times. If a filter is not replaced regularly it may become clogged with contaminants and cause a restriction in the fuel flow, causing an appreciable drop in engine performance as the engine struggles to draw enough fuel to continue running normally.

Some filters, especially found on diesel engines, are of a bowl-like design which collect water in the bottom (as water is more dense than diesel). The water can then be drained off by opening a valve in the bottom of the bowl and letting it run out, until the bowl contains only diesel. Many fuel filters contain a water sensor to signal to the engine control unit or directly to the driver (lamp on dashboard) if the water reach the warning level. It is especially undesirable for water in fuel to be drawn into a diesel engine fuel system, as the system relies on the diesel for lubrication of the moving parts, and if water gets into a moving part which requires constant lubrication (for example an injector valve), it will quickly cause overheating and unnecessary wear. This type of filter may also include a sensor, which will alert the operator when the filter needs to be drained. In proximity of the diesel fuel filter there might be a fuel heater to avoid the forming of paraffin wax (in case of low temperatures) inside the filtrating element which can stop the fuel flow to the engine. 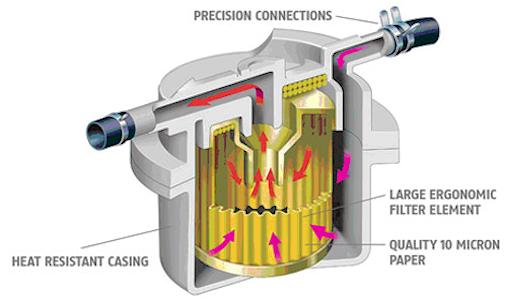