A glowplug (alternatively spelled as glow plug or glow-plug) is a heating device used to aid starting diesel engines. The glow plug is a pencil-shaped piece of metal with a heating element at the tip. This heating element, when electrified, heats due to its electrical resistance and begins to emit light in the visible spectrum, hence the term "glow" plug. The effect is very similar to that of a toaster. Heat generated by the glowplugs is directed into the cylinders, and serves to warm the engine block immediately surrounding the cylinders. This aids in reducing the amount of thermal diffusion which will occur when the engine attempts to start.

Diesel engines, unlike gasoline engines, do not use spark plugs to induce combustion. Instead, they rely solely on compression to raise the temperature of the air to a point where the diesel will combust spontaneously when introduced to the hot high pressure air. The high pressure and spray pattern of the diesel ensures a controlled, complete burn. The piston rises, compressing the air in the cylinder; this causes the air's temperature to rise. By the time the piston reaches the top of its travel path, the temperature in the cylinder is very high. The fuel mist is then sprayed into the cylinder; it instantly combusts, forcing the piston downwards, thus generating power. The pressure required to heat the air to that temperature, however, necessitates the use of a large and very strong engine block.

The problem posed is that in cold weather, if the engine has not been running (as is the case when the car is left to sit overnight), that the large engine block becomes very cold; when one then attempts to start the engine, the cold engine block acts as a heat sink, quickly dissipating the heat generated by the pistons compressing air. The engine is then unable to start, because it cannot generate and maintain enough heat for the fuel to ignite.

In older generation diesel-engine vehicles, unlike in a gasoline-engine vehicle, the operator did not simply turn the key to the "start" position and have the engine immediately start. Instead, the operator turned the key to the "on" position for a long duration; the glowplug relay switches the glowplugs on, and a light (see picture at right) on the instrument cluster illuminates. This process is called "pre-heating" or "glowing". According to Bosch: "Older engines used a glow period of up to 21 seconds whereas more modern engines use around a 6 to 8 second heat period and provide after glow at a reduced voltage".

When internal sensors detect that the core of the engine block has reached a certain designated temperature, or when a certain amount of time elapses, the glowplug relay switches off the "wait-to-start" light. A pre-heating cycle usually lasts for 2 to 5 seconds. The operator then proceeds to turn the key to the "start" position, as in a gasoline engine. The glowplug relay switches off the glowplugs after the engine is running (or, in older cars, at the same time the "wait to start" light goes out). In some newer cars, glow plugs continue to operate for up to 180 seconds after engine start to keep the engine within emissions regulations, as combustion efficiency is greatly reduced when the engine is very cold.

If the car had been running very recently, or if the ambient temperature was hot, the "wait to start" light might not come on. In this case, the operator may proceed to turn the key to the "start" position and start the engine without having to wait.

A glowplug resembles a short metal pencil. The heating filament is fitted into its tip. Glowplug filaments must be made of certain materials, such as platinum and iridium, that are resistant to both oxidation and high temperature. 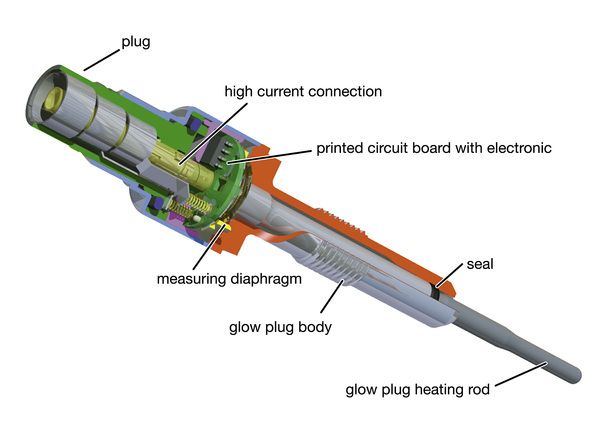