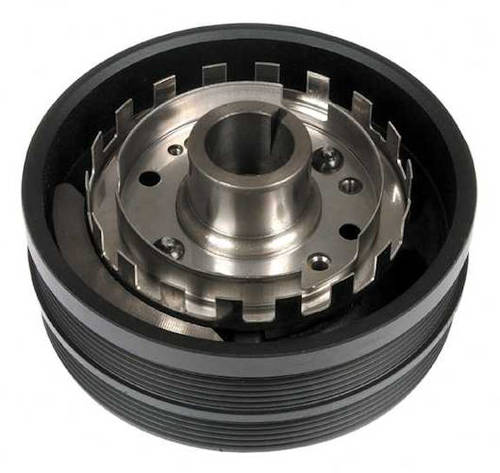 A harmonic balancer (also called crank pulley damper, crankshaft damper, torsional damper, or vibration damper) is a device connected to the crankshaft of an engine to reduce torsional vibration and serves as a pulley for drive belts.

Additionally the energy transferred from the piston to the crankshaft can induce as much as 2 degrees of twist in the crankshaft, which has many follow-on effects on all engine elements that require adequate timing such as valve opening, cam timing, ignition timing etc.

Over time, the energy dissipating (rubber/clutch/fluid) element can deteriorate from age, heat, cold, or exposure to oil or chemicals. Unless rebuilt or replaced, this can cause the crankshaft to develop cracks, resulting in crankshaft failure.

Performance enthusiasts have been known to remove harmonic balancers, usually when the balancer is attached to the crank pulley, deciding that they aren't necessary and their mass reduces the performance of the engine. However, this is unproven and potentially very risky because the danger of damage to the engine from the vibrations the damper is intended to prevent is too high.

Certain cars, however, do not come equipped with an external balancer on the crank pulley, and as such, can have the pulley replaced with a performance oriented product which counter-acts these resonance frequencies.