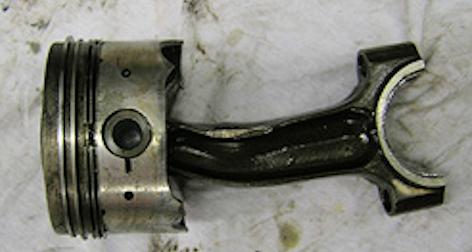 Hydrolock (a shorthand notation for hydrostatic lock) is an abnormal condition of any device which is designed to compress a gas by mechanically restraining it; most commonly the reciprocating internal combustion engine, the case this article refers to unless otherwise noted. Hydrolock occurs when a volume of liquid greater than the volume of the cylinder at its minimum (end of the piston's stroke) enters the cylinder. Since most common liquids are incompressible the piston cannot complete its travel; either the engine must stop rotating or a mechanical failure must occur.

If an engine hydrolocks while at speed, a mechanical failure is likely. Common damage modes include bent or broken connecting rods, a fractured head, a fractured block, crankcase damage, damaged bearings, or any combination of these. Forces absorbed by other interconnected components may cause additional damage. Physical damage to metal parts can manifest as a "crashing" or "screeching" sound and usually requires replacement of the engine or a substantial rebuild of its major components.

If an internal combustion engine hydrolocks while idling or under low power conditions, the engine may stop suddenly with no immediate damage. In this case the engine can often be purged by unscrewing the spark plugs or injectors and spinning the engine to expel the liquid from the combustion chambers and then restarted. Depending on how the liquid was introduced to the engine, it possibly can be restarted and dried out with normal combustion heat, or it may require more work, such as flushing out corrupted operating fluids and replacing damaged gaskets.

If a cylinder fills with liquid while the engine is turned off, the engine will refuse to turn when a starting cycle is attempted. Since the starter mechanism's torque is normally much lower than the engine's operating torque and momentum this will usually not damage the engine but may burn out the starter. The engine can be drained as above and restarted. If a corrosive substance such as water has been in the engine long enough to cause rusting, more extensive repairs will be required.

Amounts of water significant enough to cause hydrolock tend to upset the air/fuel mixture in gasoline engines. If water is introduced slowly enough, this effect can cut power and speed in an engine to a point that when hydrolock actually occurs it does not cause catastrophic engine damage.

Hydrolock most commonly occurs in automobiles when driving through floods, either where the water is above the level of the air intake or the vehicle's speed is excessive, creating a tall bow wave. A vehicle fitted with a cold air intake mounted low on the vehicle will be especially vulnerable to hydrolocking when being driven through standing water or heavy precipitation. Engine coolant entering the cylinders through various means (such as a blown head gasket) is another common cause. Excessive fuel entering (flooding) one or more cylinders in liquid form due to or other abnormal operating conditions can also cause hydrolock.

Hydrolock is common on radial and inverted engines (cylinders pointing downwards) when the engine sits for a long period. Engine oil seeps down under gravity into the cylinder through various means (through the rings, valve guides, etc.) and can fill a cylinder with enough oil to hydrolock it. The seepage effect can be observed by the blue-white smoke commonly seen when a radial engine starts up. In order to prevent engine damage, it is universal practice for the ground crew or pilot to check for hydrolock during pre-flight inspection of the aircraft, typically by hand-cranking the propeller for several turns to make sure the crankshaft cycles normally through all cylinders.