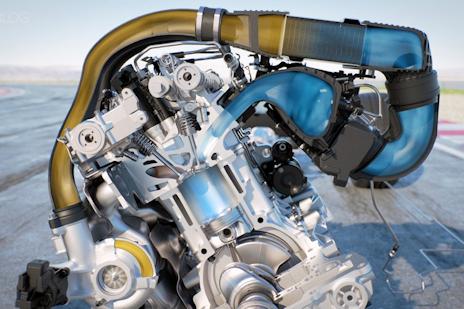 In internal combustion engines, water injection, also known as anti-detonant injection, is spraying water into the cylinder or incoming fuel-air mixture to cool the combustion chambers of the engine, allowing for greater compression ratios and largely eliminating the problem of engine knocking (detonation). This effectively reduces the air intake temperature in the combustion chamber, meaning that performance gains can be obtained when used in conjunction with a supercharger, turbocharger, altered spark ignition timing, and other modifications. The reduction of the air intake temperature allows for a more aggressive ignition timing to be employed, which increases the power output of the engine. Depending on the engine, improvements in power and fuel efficiency can also be obtained solely by injecting water.Water injection may also be used to reduce NOx or carbon monoxide emissions.

Many water injection systems use a mixture of water and alcohol (approximately 50/50), with trace amounts of water-soluble oil. The water provides the primary cooling effect due to its great density and high heat absorption properties. The alcohol is combustible, and also serves as an antifreeze for the water. The purpose of the oil is to prevent corrosion of water injection and fuel system components.  Because the alcohol mixed into the injection solution is often methanol (CH3OH), the system is known as methanol-water injection, or MW50. In the United States, the system is commonly referred to as anti-detonant injection, or ADI.

In a piston engine, the initial injection of water cools the fuel-air mixture significantly which increases its density and hence the amount of mixture that enters the cylinder. The water (if in small liquid droplets) may absorb heat (and lower the pressure) as the charge is compressed, thus reducing compression work. An additional effect comes later during combustion when the water absorbs large amounts of heat as it vaporizes, reducing peak temperature and resultant NOx formation, and reducing the amount of heat energy absorbed into the cylinder walls. This also converts part of combustion energy from the form of heat to the form of pressure. As the water droplets vaporize by absorbing heat, it turns to high pressure steam (water vapor or steam mainly resulted from combustion chemical reaction). The alcohol in the mixture burns, but is also much more resistant to detonation than gasoline. The net result is a higher octane charge that will support very high compression ratios or significant forced induction pressures before onset of detonation.

Fuel economy can be improved with water injection. Depending on the engine, the effect of water injection, with no other modification, like leaning out the mixture, may be quite significant or rather limited and in some cases negligible

Most modern consumer vehicle engines are pre-programmed with specific fuel-to-air ratios and that introducing water without re-programming the car's computer will not have any benefit and in most cases will reduce performance and possibly damage the engine. Most modern fuel systems cannot determine that water in any form has been added and cannot determine a new compression ratio or take advantage of lower cylinder temperatures. In most cases in cars that are pre-programmed, introducing water vapor will cause them to lose power because the water vapor will then take the place of air and fuel that is required to produce power. Only in vehicles in which the owner can take the car to a tuner will any benefit be seen. However, as soon as the water source is depleted the engine will be running rich and power and fuel economy will be lost again.

Damage can occur to the engine if too much water is injected or if there is a malfunction of the injector itself. Water is not compressible and if too much water makes it into the cylinder prior to detonation (during the compression cycle), the volume of liquid may exceed the engine block's head bolts threshold, causing blown heads, hydrolock, or shatterting of the piston connecting rods. This damage is fatal to the engine and typically requires a full rebuild.

Water injection is typically used in aviation and is not intended for use in consumer grade vehicles. When used in consumer grade vehicles it is for the extremely high performance arena (1000 HP+) where vehicles are super- or turbocharged and produce excessive heat. These vehicles are typically driven only in an event or controlled race and require extremely high levels of knowledge to maintain and are only driven for very short distances. In most forms of water injection, water is mixed with a combustible fuel and not injected directly from the tap.

Many product scams exist touting that inserting a tube of misting spray into an intake manifold will increase your mileage gains or horsepower. However, unless the user reprograms the car's ECU, power loss and damage will eventually occur.

In some cases water may also reduce CO emissions. This may be attributable to the water gas shift reaction, in which CO and H2O shift to form CO2 and H2.[1] However, water may also increase hydrocarbon emissions, possibly due to an increased quenching layer thickness.

Some degree of control over the water injection is important. It needs to be injected only when the engine is heavily loaded and the throttle is wide open. Otherwise injecting water cools the combustion process unnecessarily and reduces efficiency.

Direct injection of water is possible and is likely advantageous. In a piston engine, this can be done late in the power stroke or during the exhaust stroke.

A limited number of road vehicles with large-displacement engines from manufacturers such as Chrysler have included water injection. The 1962 Oldsmobile F85 was delivered with the Fluid-Injection Jetfire engine, which, incidentally, shares the title of "the world's first turbocharged road car" with the Corvair Spyder. Oldsmobile referred to the water/alcohol mixture as 'Turbo-Rocket Fluid'.

Saab offered water injection for the Saab 99 Turbo. With the introduction of the intercooler the interest in water injection disappeared, but today, water injection is also of interest because it can potentially decrease nitrogen oxide (NOx) emissions in exhaust. The most common use of water injection today is in vehicles with aftermarket forced induction systems, such as turbochargers or superchargers. Such engines are commonly tuned with a narrower margin of safety from detonation and hence benefit greatly from the cooling effects of vaporized water.