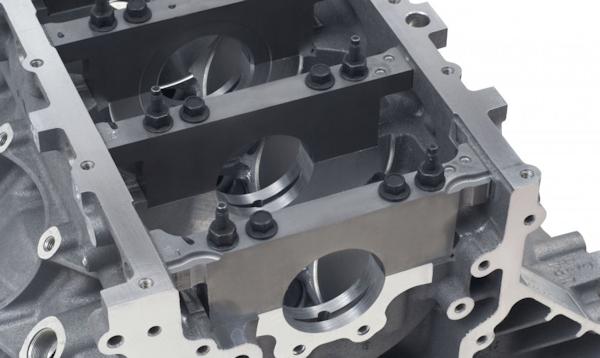 A 4-bolt main refers to the number of bolts attaching the main bearing caps to the block of an internal combustion engine. Four bolt mains are considered much stronger for high performance use than a 2 bolt main. Using 4 bolts to secure the main bearing caps reduces the amount of flex within the crankshaft as compared to 2 bolts.

The first car engine to use four-bolt main bearings was the V12 Maybach Zeppelin of 1928, that used them on three of its eight bearings.

The first Chevrolet engine to use 4-bolt mains was the 1967 Chevrolet Camaro 5.7-liter "350" V8. Chrysler and Ford employed Y-blocks, meaning that the block skirts extended below the centreline of the crankshaft. The main bearing caps could then be fixed with an additional cross-bolt, which was a horizontal bolt going into or through the main bearing cap.

Several Toyota engines, including Toyota UZ engine and Toyota MZ engine, as well as some of the Ford Modular V8 engines use 6-bolt mains to prevent crankshaft flexing with its aluminum block or during high stress applications.