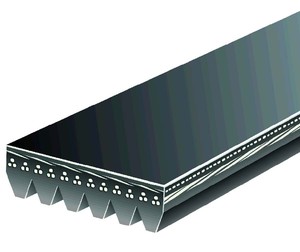 A multi-groove or polygroove belt is made up of usually 5 or 6 "V" shapes alongside each other. This gives a thinner belt for the same drive surface, thus it is more flexible, although often wider. The added flexibility offers an improved efficiency, as less energy is wasted in the internal friction of continually bending the belt. In practice this gain of efficiency causes a reduced heating effect on the belt and a cooler-running belt lasts longer in service.

A further advantage of the polygroove belt that makes them popular is that they can run over pulleys on the ungrooved back of the belt. Though this is sometimes done with Vee belts with a single idler pulley for tensioning, a polygroove belt may be wrapped around a pulley on its back tightly enough to change its direction, or even to provide a light driving force.

Any Vee belt's ability to drive pulleys depends on wrapping the belt around a sufficient angle of the pulley to provide grip. Where a single-Vee belt is limited to a simple convex shape, it can adequately wrap at most three or possibly four pulleys, so can drive at most three accessories. Where more must be driven, such as for modern cars with power steering and air conditioning, multiple belts are required. As the polygroove belt can be bent into concave paths by external idlers, it can wrap any number of driven pulleys, limited only by the power capacity of the belt.

This ability to bend the belt at the designer's whim allows it to take a complex or "serpentine" path. This can assist the design of a compact engine layout, where the accessories are mounted more closely to the engine block and without the need to provide movable tensioning adjustments. The entire belt may be tensioned by a single idler pulley