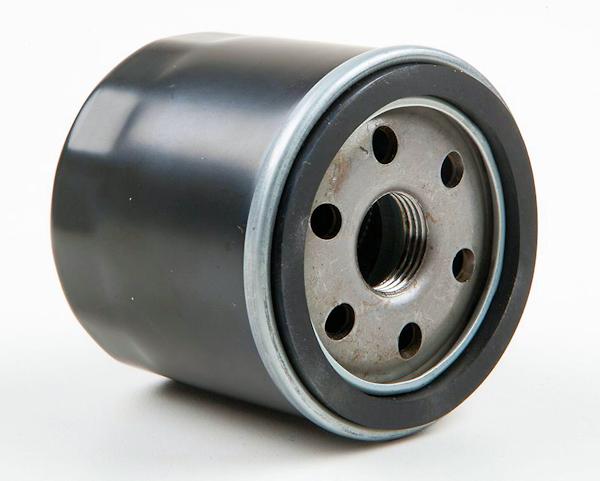 An oil filter is a filter designed to remove contaminants from engine oil, transmission oil, lubricating oil, or hydraulic oil. Oil filters are used in many different types of hydraulic machinery. A chief use of the oil filter is in internal-combustion engines in on- and off-road motor vehicles, light aircraft, and various naval vessels. Other vehicle hydraulic systems, such as those in automatic transmissions and power steering, are often equipped with an oil filter. Gas turbine engines, such as those on jet aircraft, also require the use of oil filters. Aside from these uses, oil production, transport, and recycling facilities also employ filters in the manufacturing process.

Early automobile engines did not use oil filters. For this reason, along with the generally low quality of oil available, very frequent oil changes were required. The first oil filters were simple, generally consisting of a screen placed at the oil pump intake. In 1923, American inventors Ernest Sweetland and George H. Greenhalgh devised an automotive oil filter and called it the Purolator, a portmanteau of "pure oil later". This was a bypass filter: most of the oil flowed directly from the oil pan to the engine's working parts, and a smaller proportion of the oil was sent through the filter via a second flow path in parallel with the first. The oil was thus filtered over time. Modern bypass oil filter systems for diesel engines are becoming popular in consumer applications, but have been in commercial use for some time due to potential reduction in maintenance costs. Oil filters are generally located near the middle or bottom of the engine.

Most pressurized lubrication systems incorporate an overpressure relief valve to allow oil to bypass the filter if its flow restriction is excessive, to protect the engine from oil starvation. Filter bypass may occur if the filter is clogged or the oil is thickened by cold weather. The overpressure relief valve is frequently incorporated into the oil filter. Filters mounted such that oil tends to drain from them usually incorporate an anti-drainback valve to hold oil in the filter after the engine (or other lubrication system) is shut down. This is done to avoid a delay in oil pressure buildup once the system is restarted; without an anti-drainback valve, pressurized oil would have to fill the filter before travelling onward to the engine's working parts. This situation can cause premature wear of moving parts due to initial lack of oil. 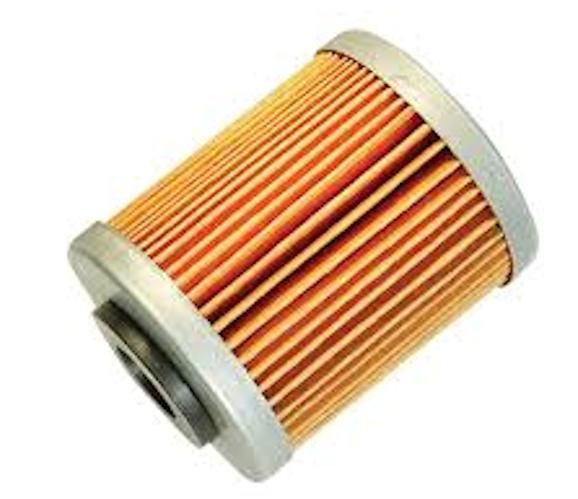 Mechanical designs employ an element made of bulk material (such as cotton waste) or pleated Filter paper to entrap and sequester suspended contaminants. As material builds up on (or in) the filtration medium, oil flow is progressively restricted. This requires periodic replacement of the filter element (or the entire filter, if the element is not separately replaceable).

Early engine oil filters were of cartridge (or replaceable element) construction, in which a permanent housing contains a replaceable filter element or cartridge. The housing is mounted either directly on the engine or remotely with supply and return pipes connecting it to the engine. In the mid-1950s, the spin-on oil filter design was introduced: a self-contained housing and element assembly which was to be unscrewed from its mount, discarded, and replaced with a new one. This made filter changes more convenient and potentially less messy, and quickly came to be the dominant type of oil filter installed by the world's automakers. Conversion kits were offered for vehicles originally equipped with cartridge-type filters In the 1990s, European and Asian automakers in particular began to shift back in favor of replaceable-element filter construction, because it generates less waste with each filter change. American automakers have likewise begun to shift to replaceable-cartridge filters, and retrofit kits to convert from spin-on to cartridge-type filters are offered for popular applications. Commercially available automotive oil filters vary in their design, materials, and construction details. These variables affect the efficacy, durability, and cost of the filter.

Magnetic filters use a permanent magnet or an electromagnet to capture ferromagnetic particles. An advantage of magnetic filtration is that maintaining the filter simply requires cleaning the particles from the surface of the magnet. Automatic transmissions in vehicles frequently have a magnet in the fluid pan to sequester magnetic particles and prolong the life of the media-type fluid filter. Some companies are manufacturing magnets that attach to the outside of an oil filter or magnetic drain plugs -- first invented and offered for cars and motorcycles in the mid-1930s -- to aid in capturing these metallic particles, though there is ongoing debate as to the effectiveness of such devices.

A sedimentation or gravity bed filter allows contaminants heavier than oil to settle to the bottom of a container under the influence of gravity.

A centrifugal oil cleaner is a rotary sedimentation device using centrifugal force rather than gravity to separate contaminants from the oil, in the same manner as any other centrifuge. Pressurized oil enters the center of the housing and passes into a drum rotor free to spin on a bearing and seal. The rotor has two jet nozzles arranged to direct a stream of oil at the inner housing to rotate the drum. The oil then slides to the bottom of the housing wall, leaving particulate oil contaminants stuck to the housing walls. The housing must periodically be cleaned, or the particles will accumulate to such a thickness as to stop the drum rotating. In this condition, unfiltered oil will be recirculated.

High efficiency oil filters are a type of bypass filter that are claimed to allow extended oil drain intervals. HE oil filters typically have pore sizes of 3 micrometres, which studies have shown reduce engine wear. Some fleets have been able to increase their drain intervals up to 5-10 times.[

Filter placement in an oil system

Deciding how clean the oil needs to be is important as cost increases rapidly with cleanliness. Having determined the optimum target cleanliness level for a contamination control programme, many engineers are then challenged by the process of optimizing the location of the filter. To ensure effective solid particle ingression balance, the engineer must consider various elements such as whether the filter will be for protection or for contamination control, ease of access for maintenance, and the performance of the unit being considered to meet the challenges of the target set. 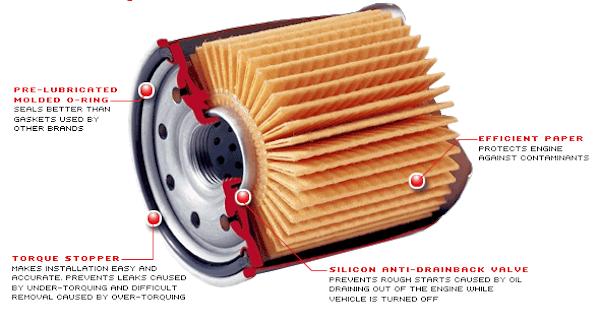