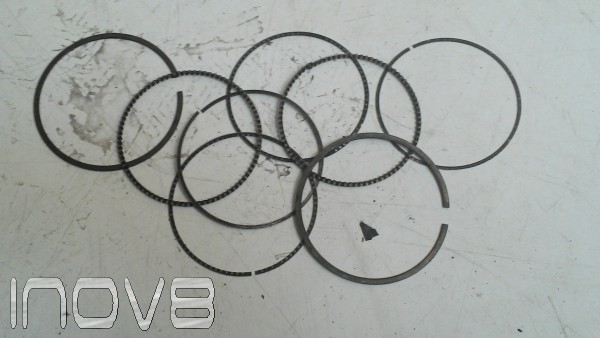 Most automotive pistons have three rings: The top two while also controlling oil are primarily for compression sealing (compression rings); the lower ring is for controlling the supply of oil to the liner which lubricates the piston skirt and the compression rings (oil control rings). At least two piston rings are found on most piston and cylinder combination. Typical compression ring designs will have an essentially rectangular cross section or a keystone (right angled trapezoidal) cross section. The periphery will then have either a barrel profile (top compression rings) or a taper napier form (second compression rings or scraper rings). There are some taper faced top rings and on some old engines simple plain faced rings were used.

The spring backed oil rings and the cast iron oil rings have essentially the same range of peripheral forms which consist of two scraping lands of various detailed form. The multipiece oil control rings usually consist of two rails or segments (these are thin steel rings) with a spacer expander spring which keeps the two rails apart and provides the radial load.

The piston might be a fairly loose fit in the cylinder. If it were a tight fit, it would expand as it got hot and might stick tight in the cylinder. If a piston sticks (seizes) it could cause serious damage to the engine. On the other hand, if there is too much clearance between the piston and cylinder walls, much of the pressure from the burning gasoline vapour will leak past the piston (a condition known as blow-by) and into the crankcase, and the push on the piston from combustion will be much less effective in delivering power.

Wear due to ring load on the bore

Piston rings are subject to wear as they move up and down the cylinder bore due to their own inherent load and due to the gas load acting on the ring. To minimize this, they are made of wear-resistant materials, such as cast iron and steel, and are coated or treated to enhance the wear resistance. Two-stroke port design is critical to ring life. Newer modern motorcycle manufacturers have many single function but serrated ports to retain the ring. Typically, top ring and oil control rings will be coated with chromium, or Nitrided, possibly plasma sprayed  or have a PVD (physical vapour deposit) ceramic coating. For enhanced scuff resistance and further improved wear, most modern diesel engines have top rings coated with a modified chromium coating known as CKSor GDC, a patent coating from Goetze which has aluminium oxide or diamond particles respectively included in the chrome surface. The lower oil control ring is designed to leave a lubricating oil film, a few micrometres thick on the bore, as the piston descends. Three piece oil rings, i.e. with two rails and one spacer, are used for four-stroke gasoline engines.

When fitting new piston rings or breaking them in within an engine, the end gap is a crucial measurement. In order that a ring may be fitted into the "grooves" of the piston, it is not continuous but is broken at one point on its circumference. The ring gap may be checked by putting the ring into the bore/liner (squared to bore) and measuring with a feeler gauge. End gap should be within recommended limits for size of bore and intended "load" of engine. Metals expand with a rise in temperature, so too small a gap may result in overlapping or bending when used under hot running conditions (racing, heavy loads, towing) and, even at normal temperatures, a small ring gap may lead to ring gap closure, ring breakage, bore damage and possible seizure of the piston. Too large a gap may give unacceptable compression and levels of blow-by gases or oil consumption. When being measured in a used bore, it may indicate excessive bore wear or ring wear. (Radial wear on ring face reduces thickness of used/worn ring (face wear in bore) essentially decreasing face circumference of ring and thereby increasing size of ring end gap.)

It is considered good practiceto build a new engine with the ring gaps staggered around the circumference of the bore. This means that any escaping gas must negotiate a labyrinth before escaping past the rings. However, while the engine is running, the rings will tend to rotate around the piston and not remain in the position as fitted. Many rings will then stick in one spot at random and remain there for the life of the engine. For this reason, ring position during build cannot be considered to be important although most engine builders would feel uncomfortable assembling an engine with the gaps aligned.

When fitting new rings to a used engine, special "ridge dodger" rings are sometimes used for the top compression ring, to improve compression and oil consumption without reboring the cylinder. These have a small step of iron removed from the top section to avoid making contact with any wear ridge at the top of the cylinder, which could break a conventional ring. These are not widely recommended, however, as they are usually not required and may give inferior oil consumption. A more acceptable method is to remove the wear ridge with a "ridge reamer" tool before lightly honing the bore to accept new rings. In fact, if the "ridge " is measured it will generally be apparent it is not really a ridge but a relatively local hollow caused by the top ring near the ring reversal point. The upper edge of this hollow will take the form of a "ramp" about 2mm long from the point of maximum wear to the point of zero wear. In this case, there is not actually any ridge to hit, so light honing may be all that is required.

During engine assembly, a piston-ring compressor is used to evenly squeeze the rings long enough to slide the piston into the cylinder.

Rings are not a very expensive part, but fitting new ones is usually very costly. This is because to fit them, the mechanic must essentially take the whole engine apart. Therefore the labour costs are the major factor. Once going that far, one might as well correct many other problems found inside - so fitting new rings is usually done as part of an entire engine rebuild/reconditioning.