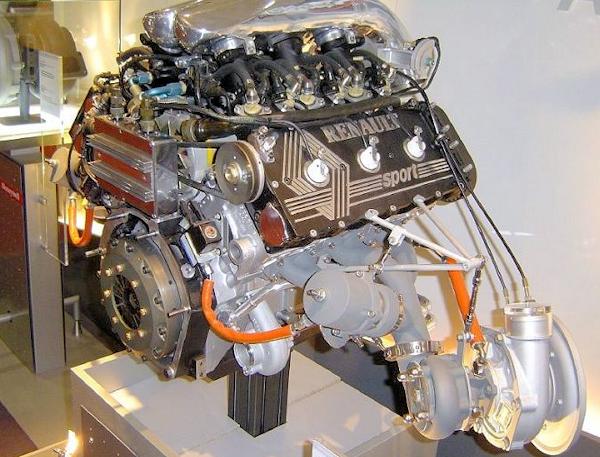 Pneumatic valve springs are metal bellows filled with compressed air used as an alternative to the metal wire springs used to close valves in high-speed internal combustion engines. This system was introduced in the mid-1980s in Renault turbocharged 1.5 litre Formula One engines.

Racing engines often fail at high rotational speeds because mechanical springs are unable to retract the valves quickly enough to provide clearance for the piston. Renault's pneumatic valve technology replaced steel springs with light weight compressed air bellows. These could retract valves more quickly and reduce the possibility of piston-valve interference, as long as pressure could be maintained. Additionally, the amount of seat tension required to keep a coil sprung valve under control results in greater peak lift loading, with added stress to the entire valvetrain as a result. Pneumatic systems, sharing a common reservoir of pressure retain a more static level of force, controlling the valve effectively, without any attendant peak lift load increase.

Bellows is a misleading word, since this would suggest some sort of concertina shaped cylinder. This is not the case, and a bellows of this design would fail due to metal fatigue at the roots and crests. Instead, it is simply a piston and cylinder, similar to a small pneumatic ram. Where the tappet bore where a hydraulic tappet would normally reside, becomes the cylinder, and the retainer assembly becomes the piston. Pressurised air(nitrogen) is pumped into this cylinder which then causes the piston/ retainer to rise to the top of cylinder, causing the valve to form an airtight seal with the seat. The compressed gas then becomes the spring so to speak, and does not have the same traits as springs do at elevated rpm. A small light spring is sometimes fitted between the piston, and retainer so that when the system is switched off, the spring forces the piston down against the bottom of bore, and forces the retainer upwards. This ensures that no crown to valve contact occurs when shut down.

Pneumatic valve springs gave Renault an advantage with its turbocharged engines, often said to be the most powerful. However, reliability and poor handling of their chassis kept the cars from success until 1989 when Renault provided Williams with a new V10 engine to begin a winning streak. Renault won the constructors' championship with Williams in 1992, 1993, 1994, 1996 and 1997, and with Benetton in 1995. Nigel Mansell, Alain Prost, Michael Schumacher, Damon Hill and Jacques Villeneuve each won a Driver's championship in the 1990s with Renault engines.

Pneumatic valve springs are also found in several Moto GP motorcycle engines, debuting in 2002 with the Aprilia RS Cube. In 2005, Team Roberts was the first to use pneumatic valves full time in their uncompetitive KTM powered bike. Today, almost all of the MotoGP teams use pneumatic valve technology on their bikes, including Yamaha, Suzuki and Honda. Ducati uses a desmodromic design.