How a Car Radiator Works

Radiators are the heart of a cars cooling system, without  them there would be no way to keep an internal combustion engine from overheating to the point  of catastrophic failure. In this article we will explain the different kinds of  radiators, different materials used in construction of them and hopefully everything  else you will ever need to know about this very important piece of equipment.

Radiators come in all shapes and sizes, depending on the space constraints and  requirements of the car it is installed in. A large vehicle used for extreme  service such as a tow truck will have a multiple-row high capacity radiator while  a small commuter car will have a much smaller radiator with a lot less capacity.  While radiators are also available in what is known as “high-efficiency” configurations,  they are for the most part built on an industry standard unless specially made or  ordered otherwise. There are 2 different styles of radiator used in the automotive  industry; cross flow and top flow.

Top Flow: As the name implies, a top flow radiator takes in  the hot coolant from the engine  on the top row of the radiator and cools it as it  flows downward to the bottom. Top flow radiators are mostly seen on older vehicles,  as they aren’t as efficient at cooling the antifreeze  as the newer cross flow design. Top flow radiators tend to be much taller than cross  flow ones, which has become a problem in the more aerodynamic vehicles produced  today where under hood space it at a minimum.

Cross Flow: Cross flow radiators are what is used in today’s  vehicles due primarily to space constraints, although they tend to be more efficient  as well. The coolant mixture is pumped into the radiator at one end and forced across  the radiator by the water pump, utilizing  more cooling tubes in the process, thus cooling the fluid more efficiently. These  radiators tend to be shorter and wider than the top flow designs.

Regardless of which design your car has in it, radiators all work on the  same principle, they are basically a large heat exchanger. Hot coolant/anti-freeze  mixture is pumped from the engine into the radiator where it is forced into smaller  tubes, these small tubes run the width or height of the radiator depending on the  design (Top or Side flow). The tubes have small fins attached to them that act as  heat syncs, which dissipate the heat through absorption and air flowing across them  through the front of the vehicle or by the fan pulling/pushing air through the radiator.  The more fins per square inch, the more efficient the radiator is at dissipating  the heat and keeping the engine cool.

Radiators all consist of a few basic parts, the tanks and the core. The tanks  on a radiator are the sides or top and bottom where the hoses attach and the coolant  enters and exits the radiator. Some vehicles incorporate coolers inside of these  tanks to help keep other fluids at optimum temperatures.Automatic transmission  equipped vehicles use coolers in the radiator tanks to cool the fluid to prevent  the transmission from overheating and failing. Vehicles that have tow options will  sometimes incorporate an engine oil cooler into the radiator to help keep the internal  engine temperatures at a safe level, though some manufacturers will use engine oil  coolers just to help stabilize the engine temperatures as a standard feature. A  radiators core is where the real magic happens. The core consists of the small tubes  and fins that actually dissipate the heat. Radiators come with different amounts  of these tubes or “rows” as they are called in the industry. A truck with a tow  option may have a “4 row” radiator which is very thick, where as a small import  may only have a “1 row” which is more than enough for the application, but considerably  thinner. The amount of rows and the size of the radiator are taken into account  when the vehicle is being designed, a radiator that is too big for the engine is  not necessary, but too small and you will have overheating issues.

Over the years the materials used in radiator construction have changed dramatically.  Older vehicles used heavy brass construction, while newer vehicles use an aluminum  core and plastic tanks. Brass radiators worked very well for many years, but material  costs and the environmental impact of the materials used to solder them together  (lead mixtures) have all but phased them out. Newer designs are lighter, just as  efficient and don’t use solder to hold them together, they are basically clamped  together with rubber gaskets. When an aluminum radiator has been replaced, the old  one goes to the recycling yard where the parts are then reused to make the same  products again, cutting down significantly on heavy metals and environmental impact.  Radiators for performance applications are usually custom fabricated to the application  and are made of aluminum tanks and cores to withstand the severe vibrations and  heat of performance applications

If you suspect that your radiator  has a leak or other problem, this can usually be found out with a minimum of  tools. Do not open the radiator cap when hot, the coolant inside will burn you.  Wait until the vehicle has cooled down to remove the cap. Once removed, verify that  the rubber-sealing ring on the bottom of the cap is in good shape and isn’t torn  or missing, this is a common leak. If it is good, verify that the radiator is full  and use a flashlight to look for leaks where the tanks attach to the core (center)  of the radiator; this is a common place for leaks as it is where the pieces are  attached to each other. On plastic tank radiators, the tanks themselves can crack  or become brittle and break for no real reason other than age, this usually occurs  behind or near where the hoses let the coolant back into the radiator from the engine,  when it is hottest.

It is recommended to replace plastic tank radiators when they  have leaking issues due to the metal fatigue in the aluminum cores and the fact  that the plastic becomes brittle from heat and age. Radiators as with all automotive  replacement parts come in a vast array of quality levels. Always remember that you  get what you pay for with automotive parts, a cheaper radiator will consist of thinner  plastic tanks and a thinner aluminum core which will not last as long or perform  as well, actual fitting issues may arise as well. When it comes to the heart of  your cooling system, always use the best OEM (Original Equipment Manufacturer) quality  parts or the equivalent for long lasting service and reliability. 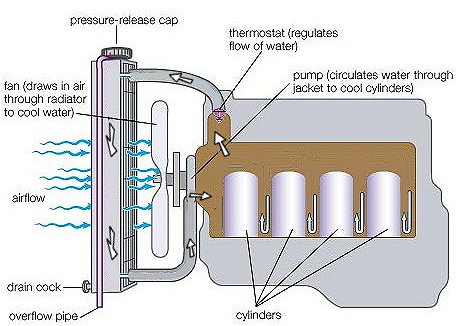