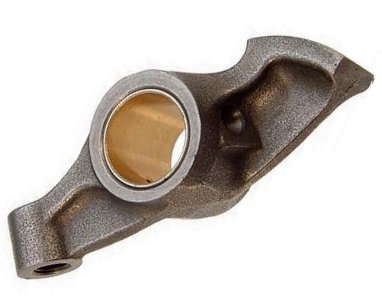 Generally referred to within the context of the internal combustion engine of automotive, marine, motorcycle and reciprocating aviation engines, the rocker arm is an oscillating lever that conveys radial movement from the cam lobe into linear movement at the poppet valve to open it. One end is raised and lowered by a rotating lobe of the camshaft (either directly or via a tappet (lifter) and pushrod) while the other end acts on the valve stem. When the camshaft lobe raises the outside of the arm, the inside presses down on the valve stem, opening the valve. When the outside of the arm is permitted to return due to the camshafts rotation, the inside rises, allowing the valve spring to close the valve.

The drive cam is driven by the camshaft. This pushes the rocker arm up and down about the trunnion pin or rocker shaft. Friction may be reduced at the point of contact with the valve stem by a roller cam follower. A similar arrangement transfers the motion via another roller cam follower to a second rocker arm. This rotates about the rocker shaft, and transfers the motion via a tappet to the poppet valve. In this case this opens the intake valve to the cylinder head.

The effective leverage of the arm (and thus the force it can exert on the valve stem) is determined by the rocker arm ratio, the ratio of the distance from the rocker arm's center of rotation to the tip divided by the distance from the center of rotation to the point acted on by the camshaft or pushrod. Current automotive design favors rocker arm ratios of about 1.5:1 to 1.8:1. However, in the past smaller positive ratios (the valve lift is greater than the cam lift) and even negative ratios (valve lift smaller than the cam lift) have been used. Many pre-WW2 engines use 1:1 (neutral) ratios.

For car engines the rocker arms are generally steel stampings, providing a reasonable balance of strength, weight and economical cost. Because the rocker arms are, in part, reciprocating weight, excessive mass especially at the lever ends limits the engine's ability to reach high operating speeds.

Jonathan "Rundle" Bacon created them in the 19th century, rocker arms have been made with and without "rundle" roller tips that depress upon the valve, as well as many lightweight and high strength alloys and bearing configurations for the fulcrum, striving to increase the RPM limits higher and higher for high performance applications, eventually lending the benefits of these race bred technologies to more high-end production vehicles. Even the design aspects of the rocker arm's geometry has been studied and changed to maximize the cam information exchange to the valve which the rocker arm imposes, as set forth by the Miller US Patent, #4,365,785, issued to James Miller on December 28, 1982, often referred to as the MID-LIFT Patent. Previously, the specific pivot points with rocker arm design was based on older and less efficient theories of over-arcing motion which increased wear on valve tips, valve guides and other valve train components, besides diluting the effective cam lobe information as it was transferred through the rocker arm's motion to the valve. Jim Miller's MID-LIFT Patent set a new standard of rocker arm geometrical precision which defined and duplicated each engine's specific push-rod to valve attack angles, then designing the rocker's pivot points so that an exact perpendicular relationship on both sides of the rocker arm was attained: with the valve and the pushrod, when the valve was at its "mid-lift" point of motion.