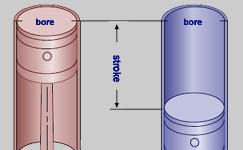 In a reciprocating piston engine, the stroke ratio, defined by either bore/stroke ratio or stroke/bore ratio, is a term to describe the ratio between cylinder bore diameter and piston stroke. This can be used for either an internal combustion engine, where the fuel is burned within the cylinders of the engine, or external combustion engine, such as a steam engine, where the combustion of the fuel takes place outside the working cylinders of the engine.

While the stroke ratio can provide insight into the goals of an engine's designer, it has no direct effect on the speed at which an engine reaches maximum torque.

In a piston engine, there are two different ways of describing the stroke ratio of its cylinders, namely: bore/stroke ratio, and stroke/bore ratio.

The diameter of the cylinder bore is divided by the length of the piston stroke to give the ratio.

Stroke/bore ratio is less common than bore/stroke ratio, but is used in some countries, such as Finland.

The length of the piston stroke is divided by the diameter of the cylinder bore to give the ratio.

The following terms describe the naming conventions for the configurations of the various bore/stroke ratio:

An engine is described as a square engine when it has equal bore and stroke dimensions, giving a bore/stroke value of exactly 1:1.

By custom, engines that have a bore/stroke ratio of between 0.95 and 1.04 can be considered "square".

The Volkswagen Group W16 engine as used in the Bugatti Veyron is an example of a square engine - with an identical bore and stroke of 86.0 millimetres (3.39 in).

The BMW M52 engine with a displacement of 2793 cubic centimeters is an example of a perfect square engine with a bore of 84 mm and a stroke of 84 mm.

Nissan's SR20DE is a square engine, with a bore and stroke of 86mm.

Toyota's 2JZ-GE/2JZ-GTE is a square engine, with a bore and stroke of 86mm.

The 1982-onwards Honda Nighthawk 250 and Honda CMX250C Rebel have a 53mm bore and 53mm stroke also making it a square engine.

Škoda used square engines in some of their rear-engine models between 1964–1990, with a bore and stroke of 68mm and 72mm.

An engine is described as oversquare or short-stroke if its cylinders have a greater bore diameter than its stroke length, giving a bore/stroke ratio greater than 1:1.

An oversquare engine allows for more and larger valves in the head of the cylinder, lower friction losses (due to the reduced distance travelled during each engine rotation) and lower crank stress (due to the lower peak piston speed relative to engine speed). Due to the increased piston- and head surface area, the heat loss increases as the bore/stroke-ratio is increased excessively. Because these characteristics favor higher engine speeds, oversquare engines are often tuned to develop peak torque at a relatively high speed.

Examples include both Chevrolet and Ford small-block V8s. The BMW N43 gasoline engine has a bore/stroke ratio of 1.083.

Boxer engines (such as those built by Volkswagen, Porsche, and Subaru) typically feature oversquare designs since any increase in stroke length would result in twice the increase in overall engine width. This is particularly so in Subaru's front-engine layout, where the steering angle of the front wheels is constrained by the width of the engine. Although oversquare engines have a reputation for being high-strung, low-torque machines, the Subaru EJ engine EJ181 develops peak torque at speeds as low as 3200 rpm.

The Ducati Panigale motorcycle engine is massively oversquare with a bore/stroke ratio of 1.84:1. It was given the name "SuperQuadro" by Ducati, roughly translated as "super-square" from Italian.

The side-valve Belgian D-Motor LF26 aero-engine has a bore/stroke ratio of 1.4:1.

An engine is described as undersquare or long-stroke if its cylinders have a smaller bore (width, diameter) than its stroke (length of piston travel) - giving a ratio value of less than 1:1.

At a given engine speed, a longer stroke increases engine friction (since the piston travels a greater distance per stroke) and increases stress on the crankshaft (due to the higher peak piston speed). The smaller bore also reduces the area available for valves in the cylinder head, requiring them to be smaller or fewer in number. Because these factors favor lower engine speeds, undersquare engines are most often tuned to develop peak torque at relatively low speeds.

Many inline engines, particularly those mounted transversely in front-wheel-drive cars, utilize an undersquare design. The smaller bore allows for a shorter engine that increases room available for the front wheels to steer. Examples of this include many Volkswagen, Honda, and Mazda engines. The 1KR-FE-engine used in the Toyota Aygo, Citroën C1 and Peugeot 107 amongst others is an example of a modern long-stroke engine widely used in FF layout cars. This engine has a 71 mm bore and 84 mm stroke giving it a bore/stroke ratio of 0.845:1. Some rear-wheel-drive cars that borrow engines from front-wheel-drive cars (such as the Mazda MX-5) use an undersquare design.

Despite their reputation as low-speed torque machines, some undersquare engines are designed for quite high speeds. The Honda Integra Type R's B18C5 engine has one of the highest redlines (8,400 rpm) of any production engine, yet features an undersquare design. The 2011 Ford Coyote engine is a modern undersquare engine with a 7,000 rpm redline.

Many British automobile companies used undersquare designs through the 1950s, largely because of a motor tax system that taxed cars by their cylinder bore. This includes the BMC A-Series engine, and many Nissan derivatives.