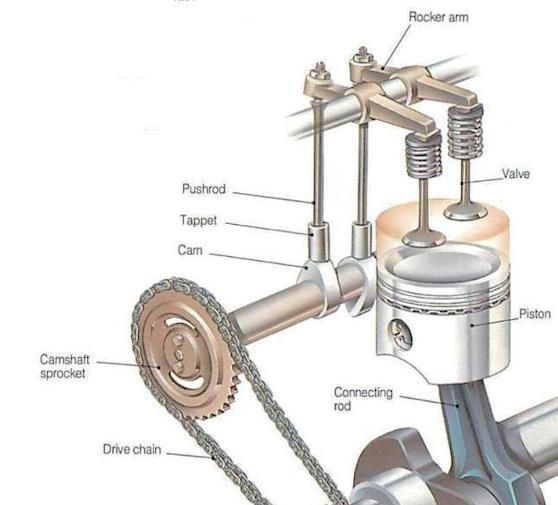 The term tappet is widely used in relation to internal combustion engines, but imprecisely. It is most commonly encountered as a maintenance task for overhead valve engines, that of 'adjusting the tappets'. This operation adjusts the overall clearance in the valve actuation system: typically 20 thousandths of an inch (0.5 mm). The name arises because it is the clearance of the tappets that is being adjusted, even though the adjustment is not made to the tappets themselves.

Strictly speaking, the tappet is that part, also termed a cam follower that runs on the camshaft and is made to move vertically by the action of the rotating cam. In an overhead valve engine, this tappet is fitted low down in the engine block. From there it drives a long thin pushrod, up to the top of the engine, above the cylinder head. Here the rockers, arranged on a rocker shaft beneath the rocker cover, reverse the direction of the valve movement to press the valves downwards to open them.

Early tappets had rollers to reduce wear from the rotating camshaft but it was found that the roller pivots wore even faster and also that the small radius of the rollers also tended to accelerate wear on the expensive camshaft. Tappets then developed plain flat ends, although these were slightly radiused as 'mushroom' tappets as a perfectly flat end led to 'slamming' against a steep camshaft face.

This long and widely used engine arrangement was adjusted by adjusting a screw set in the end of the rocker that pressed on the end of the pushrod. This adjustment was made by rotating the engine until the cam was at its lowest point, giving the widest gap, then adjusting the rocker until this gap was at the correct spacing, as measured with the use of a feeler gauge.

Mis-adjusted tappets can give rise to an audible 'tappet rattle' from the rocker cover, if the valve clearances are excessive. Over-tight clearances may, even worse, lead to bent pushrods. The adjusting screw was locked by a locknut. If the screw became loose, the adjustment would also work loose. Such a simple matter as a loose tappet locknut even led to an engine fire, then the aircraft crash that led to the death of WWII radar expert Alan Blumlein.

Some mass-market car engines from the 1960s, replaced the rocker-end adjustment screw with a non-adjustable rocker pivoted on a central stud with a hemispherical nut. Tappet adjustment was made by moving the pivot nut up and down. Some of these designs also required the tappet clearance to be set with the engine running As this rapidly wore out feeler gauges, long rolls of disposable feeler strip were needed instead.

Hydraulic tappets are tappets that contain a small hydraulic piston, pressurised by the engine's lubricating oil supply. Although the piston does not move appreciably or frequently, it acts as a hydraulic spring that automatically adjusts the tappet clearance according to the oil pressure. This makes the valve actuation self-adjusting and there is no need to adjust the rockers. Hydraulic tappets depend on a supply of clean oil at the appropriate pressure. When starting a cold engine, with low oil pressure, hydraulic tappets are often noisy for a few seconds, until they position themselves correctly.

The earlier sidevalve engine had a similar arrangement, but simpler. As the valves were mounted at the sides of the cylinder and faced upwards, the camshaft could be placed directly beneath them and there was no need for a rocker. With lower cylinder blocks, the tappets could drive the valves directly without needing even a push rod

Sidevalve engines also required their tappets adjusting, and in this case it was the tappets themselves that were adjusted directly. Small access plates were provided on the sides of the cylinder block, giving access to the gap between the valves and tappets. Some tappets had a threaded adjuster, but simpler engines could be adjusted by grinding down the ends of the valve stem directly. As the adjustment gap need only be expanded over the engine's working life (re-grinding valves into their valve seats during de-coking makes them sit lower, thus closing up the tappet gap), adjustment by removing metal was acceptable. Care was obviously needed, to not remove too much. Eventually the valves would be replaced entirely, a relatively common operation for engines of this era.

Overhead cam engines first developed as high performance aircraft and racing engines, with the camshafts mounted directly over the valves and driving them through a simple bucket tappet. To give the best valve position for gasflow through a crossflow cylinder head, valves were usually mounted in two rows and with two separate camshafts. These bucket tappets were usually adjusted by a small shim, either above or below the tappet. Shims were made in a range of standard thicknesses and a mechanic would swap them to change the tappet gap. The engine would first be assembled with a default shim of known thickness, then the gap measured. A set of different shims would then be installed, each one chosen according to the change needed from the measured gap to the ideal gap. The gaps would then be measured again, in case of mistakes and also in case the cam position had shifted slightly. As the camshaft had to be removed to change the shims, this was an extremely time consuming operation, especially as the precise height of the camshaft above the cylinder head could change, depending on how carefully it was re-installed.

A much improved system placed the shims above the tappet. This allowed each shim to be changed without removing either the tappet or camshaft, usually by pressing the tappet and valve down against the valve spring with a lever tool and removing the shim with tweezers. A difficulty with this system is that the rubbing surface of the tappet becomes the surface of the shim, which is a difficult problem of mass-production metallurgy. The first mass production engine to use this system was the Fiat twin-cam engine of the early 1960s, followed by engines from Volvo and the water-cooled Volkswagens.

The development of more efficient OHC mass-production car engines in the 1960s, combining overhead crossflow valves with the low cost of a single camshaft encouraged engines with overhead rockers, directly beneath a single overhead camshaft. These rockers combined the function of sliding tappet, rocker and adjustment device. Adjustment was usually by a threaded pivot stud beneath the rocker. Linear sliding tappets became a problem for wear and demanded careful lubrication. Some engines, such as the Ford Pinto, developed a poor reputation for camshaft wear and encouraged aftermarket improvements to their lubrication systems.