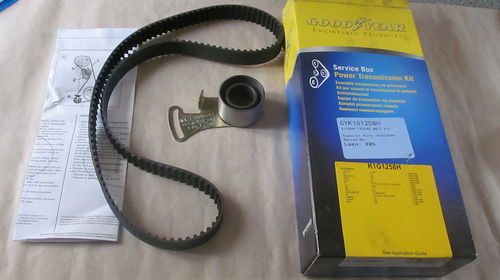 A timing belt or timing chain is a part of an internal combustion engine that synchronizes the rotation of the crankshaft and the camshaft(s) so that the engine's valves open and close at the proper times during each cylinder's intake and exhaust strokes. In an interference engine the timing belt or chain is also critical to preventing the piston from striking the valves. A timing belt is a belt that usually features teeth on the inside surface, while a timing chain is a roller chain.

In the internal combustion engine application the timing belt or chain connects the crankshaft to the camshaft(s), which in turn control the opening and closing of the engine's valves. A four-stroke engine requires that the valves open and close once every other revolution of the crankshaft. The timing belt does this. It has teeth to turn the camshaft(s) synchronised with the crankshaft, and is specifically designed for a particular engine. In some engine designs the timing belt may also be used to drive other engine components such as the water pump and oil pump.

Gear or chain systems are also used to connect the crankshaft to the camshaft at the correct timing. However, gears and shafts constrain the relative location of the crankshaft and camshafts. Even where the crankshaft and camshaft(s) are very close together, as in pushrod engines, most engine designers use a short chain drive rather than a direct gear drive. This is because gear drives suffer from frequent torque reversal as the cam profiles "kick back" against the drive from the crank, leading to excessive noise and wear. Fibre gears, with more resilience, are preferred to steel gears where direct drive has to be used.

A belt or chain allows much more flexibility in the relative locations of the crankshaft and camshafts.

While chains and gears may be more durable, rubber composite belts are quieter in their operation (in most modern engines the noise difference is negligible), are less expensive and more efficient, by dint of being lighter, when compared with a gear or chain system. Also, timing belts do not require lubrication, which is essential with a timing chain or gears. A timing belt is a specific application of a synchronous belt used to transmit rotational power synchronously.

Timing belts are typically covered by metal or polymer timing belt covers which require removal for inspection or replacement. Engine manufacturers recommend replacement at specific intervals.The manufacturer may also recommend the replacement of other parts, such as the water pump, when the timing belt is replaced because the additional cost to replace the water pump is negligible compared to the cost of accessing the timing belt. In an interference engine, or one whose valves extend into the path of the piston, failure of the timing belt (or timing chain) invariably results in costly and, in some cases, irreparable engine damage, as some valves will be held open when they should not be and thus will be struck by the pistons.

Indicators that the timing chain may need to be replaced include a rattling noise from the front of the engine.

When an automotive timing belt is replaced, care must be taken to ensure that the valve and piston movements are correctly synchronized. Failure to synchronize correctly can lead to problems with valve timing, and this in turn, in extremes, can cause collision between valves and pistons in interference engines. This is not a problem unique to timing belts since the same issue exists with all other cam/crank timing methods such as gears or chains.

Timing belts must be replaced at the manufacturer's recommended distance and/or time periods. Failure to replace the belt can result in complete breakdown or catastrophic engine failure, especially in interference engines.The owner's manual maintenance schedule is the source of timing belt replacement intervals, typically every 60,000 to 100,000 miles. It is common to replace the timing belt tensioner at the same time as the belt is replaced.

The usual failure modes of timing belts are either stripped teeth (which leaves a smooth section of belt where the drive cog will slip) or delamination and unraveling of the fiber cores. Breakage of the belt, because of the nature of the high tensile fibers, is uncommon. Correct belt tension is critical - too loose and the belt will whip, too tight and it will whine and put excess strain on the bearings of the cogs. In either case belt life will be drastically shortened. Aside from the belt itself, also common is a failure of the tensioner, and/or the various gear and idler bearings, causing the belt to derail.

A timing belt is typically rubber with high-tensile fibres (e.g. fiberglass or Twaron/Kevlar) running the length of the belt as tension members.

Rubber degrades with higher temperatures, and with contact with motor oil. Thus the life expectancy of a timing belt is lowered in hot or leaky engines. Newer or more expensive belts are made of temperature resistant materials such as "highly saturated nitrile" (HSN).The life of the reinforcing cords is also greatly affected by water and antifreeze. This means that special precautions must be taken for off road applications to allow water to drain away or be sealed from contact with the belt.

The first known timing belt was used in 1954 in the Devin Sports Car that won the Sports Car Club of America (SCCA) National Championship in 1956 (See May 1957 article in Sports Cars Illustrated, author O. C. Rich). Temple, Steve (2004). "Behold Your Timing Belt: Keeping the camshaft and crankshaft in sync". Know-How. Advance Auto Parts. Archived from the original on 2006-04-13. Retrieved 2006-06-09. - "In earlier engines, camshafts were often gear-driven off the crankshaft. Later, powerplant designers developed chain drives in OHV (overhead valve) configurations that allowed some flexibility in the placement of the camshaft so that shorter pushrods could be used, for more performance and efficiency. Those engines with long chains sometimes tended to whip about and cause problems. The only alternative was a noisy and complicated multi-gear train until the cogged rubber synchronous timing belt was invented by Bill Devin in 1954. In a little over a decade, it began to appear on production vehicles and eventually became our standard cam drive in everything from Volkswagen and Toyota, to Ferrari and BMW.

The German Glas 1004 was the first mass produced vehicle to use a timing belt in 1962. In 1966, Opel started production of the Slant Four overhead cam four-cylinder design which used a timing belt, a configuration that is now used in the vast majority of cars built today.