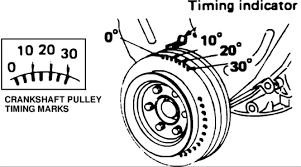 A timing mark is an indicator used for setting the timing of the ignition system of an engine, typically found on the crankshaft pulley (as pictured) or the flywheel, being the largest radius rotating at crankshaft speed and therefore the place where marks at one degree intervals will be farthest apart.

On older engines it is common to set the ignition timing using a timing light, which flashes in time with the ignition system (and hence engine rotation), so when shone on the timing marks makes them appear stationary due to the stroboscopic effect. The ignition timing can then be adjusted to fire at the correct point in the engine's rotation, typically a few degrees before top dead centre and advancing with increasing engine speed. The timing can be adjusted by loosening and slightly rotating the distributor in its seat. 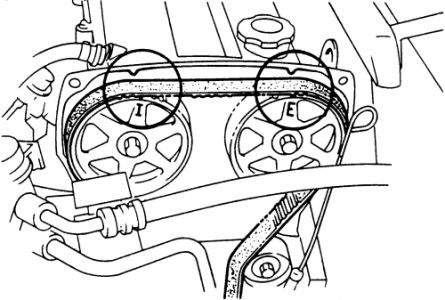