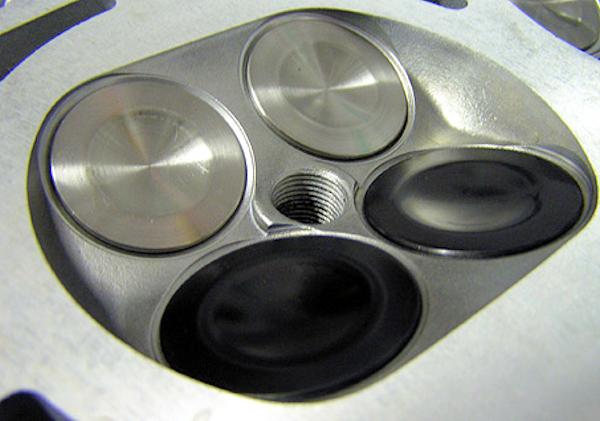 In automotive engineering a multi-valve or multivalve engine is one where each cylinder has more than two valves. A multi-valve engine has better breathing and can operate at higher revolutions per minute (RPM) than a two-valve engine, delivering more power

A multi-valve design typically has three, four, or five valves per cylinder to achieve improved performance. Any four-stroke internal combustion engine needs at least two valves per cylinder: one for intake of air and fuel, and another for exhaust of combustion gases. Adding more valves increases valve area and improves the flow of intake and exhaust gases, thereby enhancing combustion, volumetric efficiency, and power output. Multi-valve geometry allows the spark plug to be ideally located within the combustion chamber for optimal flame propagation. Multi-valve engines tend to have smaller valves that have lower reciprocating mass, which can reduce wear on each cam lobe, and allow more power from higher RPM without the danger of valve bounce. Some engines are designed to open each intake valve at a slightly different time, which increases turbulence, improving the mixing of air and fuel at low engine speeds. More valves also provide additional cooling to the cylinder head. The disadvantages of multi-valve engines are an increase in manufacturing cost and a potential increase in oil consumption due to the greater number of valve stem seals. Some SOHC multi-valve engines (such as the Mazda B8-ME) use a single fork-shaped rocker arm to drive two valves (generally the exhaust valves) so that fewer cam lobes will be needed in order to reduce manufacturing costs.

This has a single large exhaust valve and two smaller intake valves. A three-valve layout allows better breathing than a two-valve head, but the large exhaust valve results in a lower RPM limit. The manufacturing cost for this design can be lower than for a four-valve design. This design was common in the late 1980s and early 1990s, but has been largely superseded by four and five-valve designs.

This is the most common type of multi-valve head, with two exhaust valves and two similar (or slightly larger) inlet valves. This design allows similar breathing as compared to a three-valve head, and as the small exhaust valves allow high RPM, this design is very suitable for high power outputs.

Less common is the five-valve head, with two exhaust valves and three inlet valves. All five valves are similar in size. This design allows excellent breathing, and, and as every valve is small, high RPM and very high power outputs are available. It has been questioned whether a five-valve configuration gives a worthwhile benefit over four-valve designs. In theory, a five-valve design should have a higher maximum RPM, and the three inlet ports should give both good cylinder-filling and high turbulence (both desirable traits). After making the five-valve Genesis engine for several years, Yamaha returned to the more cost-effective four-valve design.

Larger numbers of valves offer decreasing area given a round cylinder bore and equal-area sized valves. Consider the effective areas of differing valve quantities as proportion of cylinder bore:

After five the effective valve-bores get smaller, while presenting a greater level of complexity and cost. In reality intake valves are often larger than exhaust in even-numbered heads, in odd-numbered, the exhaust valves can be larger individually, but their total area will be lesser.

Turbocharging and supercharging are technologies that also improve engine breathing, and can be used instead of, or in conjunction with, multi-valve engines. Same applies to variable valve timing and variable intake manifolds. Rotary valves also offer improved engine breathing and high rev performance but these were never very successful. Cylinder head porting, as part of engine tuning, is also used to improve engine performance.

The first motorcar in the world to have an engine with two overhead camshafts and four valves per cylinder was the 1912 Peugeot L76 Grand Prix race car. Its 7.6-litre monobloc straight-4 with modern hemispherical combustion chambers produced 148 bhp (0.32 bhp per cubic inch). In April 1913, on the Brooklands racetrack in England, a specially built L76 called "la Torpille" (torpedo) beat the world speed record of 170 km/h. Robert Peugeot also commissioned the young Ettore Bugatti to developed a GP racing car for the 1912 Grand Prix. This chain-driven Bugatti Type 18 had a 5-litre straight-4 with SOHC and three valves per cylinder (two inlet, one exhaust). It produced appr. 100 bhp at 2800 rpm (0.30 bhp per cubic inch) and could reach 99 mph. The three-valve head would later be used for some of Bugatti's most famous cars, including the 1922 Type 29 Grand Prix racer and the legendary Type 35 of 1924. Both Type 29 and Type 35 had a 100 bhp 2-liter SOHC 24-valve NA straight-8 that produced 0.82 bhp per cubic inch.

Early multi-valve engines in T-head configuration were the 1917 Stutz straight-4 and 1919 Pierce-Arrow straight-6 engines. The standard flathead engines of that day were not very efficient and designers tried to improve engine performance by using multiple valves. The Stutz Motor Company used a modified T-head with 16 valves, twin-spark ignition and aluminium pistons to produce 80 bhp (59 kW) at 2400 rpm from a 360.8 cid (5.8-liter) straight-4 (0.22 bhp per cubic inch). Over 2300 of these powerful early multi-valve engines were built. Stutz not only used them in their famous Bearcat sportscar but in their standard touring cars as well. In 1919 Pierce-Arrow introduced its 524.8 cid (8.6-liter) straight-6 with 24 valves. The engine produced 48.6 bhp (0.09 bhp per cubic inch) and ran very quietly, which was an asset to the bootleggers of that era.

Multi-valve engines continued to be popular in racing and sports engines. Robert M. Roof, the chief engineer for Laurel Motors, designed his multi-valve Roof Racing Overheads early in the 20th century. Type A 16-valve heads were successful in the teens, Type B was offered in 1918 and Type C 16-valve in 1923. Frank Lockhart drove a Type C overhead cam car to victory in Indiana in 1926.

Bugatti also had developed a 1.5-liter OHV straight-4 with four valves per cylinder as far back as 1914 but did not use this engine until after World War I. It produced appr. 30 bhp (22.4 kW) at 2700 rpm (15.4 kW/liter or 0.34 bhp/cid). In the 1920 Voiturettes Grand Prix at Le Mans driver Ernest Friderich finished first in a Bugatti Type 13 with the 16-valve engine, averaging 91.96 km/h. Even more successful was Bugattis clean sweep of the first four places at Brescia in 1921. In honour of this memorable victory all 16-valve-engined Bugattis were dubbed Brescia. From 1920 through 1926 about 2000 were built.

Ferrari developed their Quattrovalvole (or QV) engines in the 80s. Four valves per cylinder were added for the 1982 308 and Mondial Quattrovalvole, bringing power back up to the pre-FI high of 245 hp (183 kW) . A very unusual Dino Quattrovalvole was used in the 1986 Lancia Thema 8.32. It was based on the 308 QV's engine, but used a split-plane crankshaft rather than the Ferrari-type flat-plane. The engine was constructed by Ducati rather than Ferrari, and was produced from 1986 through 1991. The Quattrovalvole was also used by Lancia for their attempt at the World Sportscar Championship with the LC2. The engine was twin-turbocharged and destroked to 2.65 litres, but produced 720 hp (537 kW) in qualifying trim. The engine was later increased to 3.0 litres and increased power output to 828 hp (617 kW). The 1984 Ferrari Testarossa had a 4.9-liter flat-12 with four valves per cylinder. Almost 7,200 Testarossa were produced between 1984 and 1991. 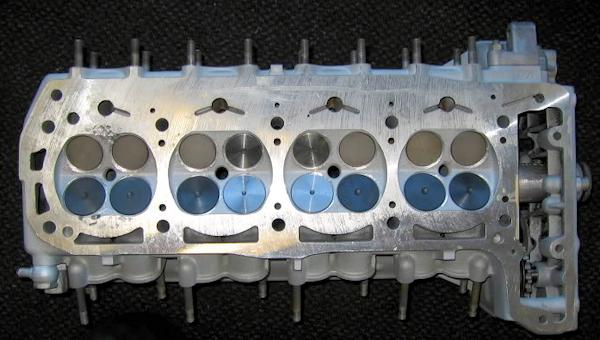 The 1.6-liter (1,587 cc) 4A-GE Toyota engine was one of the earliest straight-4 engines to have both a DOHC 16-valve configuration (four valves per cylinder, two intake, two exhaust) and electronic fuel injection (EFI). The cylinder head was developed by Yamaha Motor Corporation and was built at Toyota's Shimayama plant. While originally conceived of as a two-valve design, in 1984 Toyota and Yamaha changed the 4A-GE to a four-valve after a year of evaluation. It produced 115-140 bhp/86-104 kW@6,600 rpm (54.2-65.5 kW/liter) and 148 Nm/109 lbft@5,800 rpm. To compensate for the reduced air speed of a multi-valve engine at low rpm, the first-generation engines included the T-VIS feature.

Mercedes and Ford produce three-valve V6 and V8 engines, Ford claiming an 80% improvement in high RPM breathing without the added cost of a DOHC valve train. The Ford design uses one spark plug per cylinder located in the centre, but the Mercedes design uses two spark plugs per cylinder located on opposite sides, leaving the centre free to add a direct-to-cylinder fuel injector at a later date.

The 1989 Citroën XM was the first 3-valve diesel-engined car.

The V12 engines of many World War II fighter aircraft also used a SOHC configuration with four valves for each cylinder.

Mitsubishi were the first to market a car engine with five valves per cylinder, with the 548 cc 3G81 engine in their Minica Dangan ZZ kei car in 1989.

Although most multi-valve engines have overhead camshafts, either SOHC or DOHC, a multivalve engine may be a pushrod overhead valve engine (OHV) design. Chevrolet has revealed a three-valve version of its Generation IV V8 which uses pushrods to actuate forked rockers, and Cummins makes a four-valve OHV straight six diesel, the Cummins B Series (now known as ISB). Ford also uses pushrods in its 6.7L Power Stroke engine using four pushrods, four rockers and four valves per cylinder.

The 1981 Maserati Biturbo (with AM452 18-valve 2-liter V6 engine) was the first production car to use a multi-valve turbocharged engine.