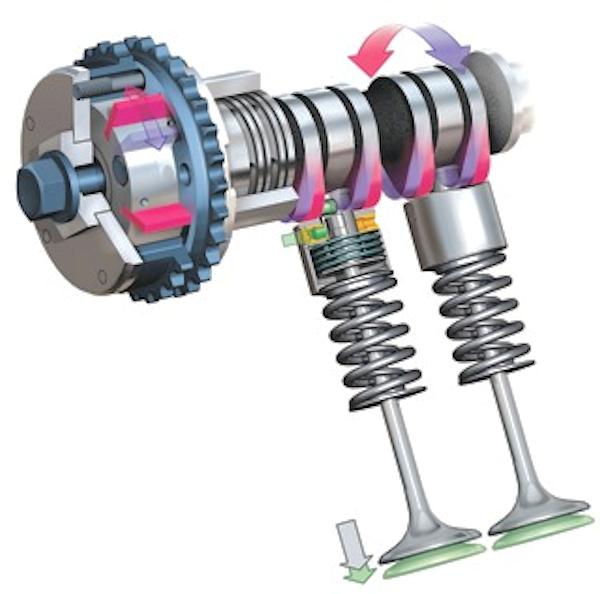 In a piston engine, the valve timing is the precise timing of the opening and closing of the valves.

In four-stroke cycle engines and some two-stroke cycle engines, the valve timing is controlled by the camshaft. It can be varied by modifying the camshaft, or it can be varied during engine operation by the relatively new technology of variable valve timing. It is also affected by the adjustment of the valve mechanism, and particularly by the tappet clearance. However, this variation is normally unwanted.

Engines that always run at a relatively high speed, such as race car engines, will have considerable overlap in their valve timings for maximum volumetric efficiency. Road car engines are different because they are required to idle at less than 1000rpm, and excessive valve overlap would make smooth idling impossible because of the mixing of fresh and exhaust gases. Variable valve timing can give both maximum power at high rpm and smooth idling at low rpm by making small changes to the relative angular position of the camshafts and thereby varying the valve overlap.

Many two-stroke cycle and all wankel engines do not have a camshaft or valves, and the port timing can only be varied by machining the ports, and/or modifying the piston skirt (two stroke applications). Some supercharged two-stroke diesel engines do however have a cylinder head and camshaft similar to a four-stroke cycle engine.

In a steam engine, the control of the valve timing is an important part of the operation of the engine.