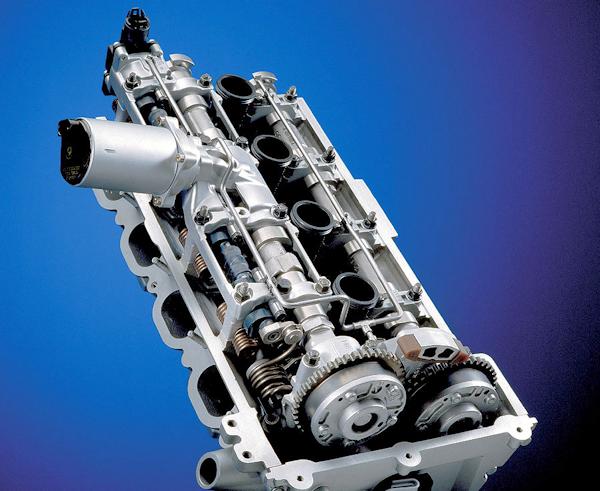 Variable valve lift is a technology which is increasingly used in automotive piston engines. It varies the height that a valve opens, in order to improve performance, fuel economy or emissions.

In September 1975, General Motors (GM) patented a system intended to vary valve lift. GM was interested in throttling the intake valves in order to reduce emissions. This was done by minimizing the amount of lift at low load to keep the intake velocity higher, thereby atomizing the intake charge. GM encountered problems running at very low lift, and abandoned the project.

In 2001, BMW introduced the Valvetronic system. The Valvetronic system can continuously and precisely vary intake valve lift, and in addition, the independent Double VANOS system can concurrently vary the timing for both the intake and exhaust valves. The precise control the system has over the intake valves allows for the intake charge to be controlled entirely by the intake valves, eliminating the need for a throttle valve and greatly reducing pumping loss. The reduction of pumping loss accounts for a 10-15% increase in power output and fuel economy.

Nissan introduced its Variable Valve Event and Lift (VVEL) in 2007 as the world's second CVVL system. The first application was on the VQ37VHR V6 engine of Skyline Coupe (Infiniti G37). Nissan's system is more compact than BMW’s, involving fewer parts and less energy loss, and is therefore more adaptable to high-performance engines.The VVEL does not use a conventional intake camshaft. Each valve is actuated by a cam which is pivoted on - but not fixed to - the camshaft. While conventional camshafts feature fixed rotating lobes, the cam in VVEL swings up and down; this is why it does not need a symmetric profile. Its movement is driven by the camshaft via a series of components. VVEL varies valve lift by the eccentric control shaft inside the rocker arm. By rotating the eccentric control shaft, the position of rocker arm is shifted, changing the swing angle of cam. The swing angle of cam determines the degree of valve lift.

First introduced by BMW on the 316ti compact in 2001, Valvetronic has since been added to many of BMW's engines.

The Valvematic system offers continuous adjustment to lift volume and timing, and improves fuel efficiency by controlling the fuel/air mixture using valve control rather than conventional throttle plate control. The technology made its first appearance in 2007 in the Noah and later in early-2009 in the ZR engine family used on the Avensis. This system is simpler in design compared to Valvetronic and VVEL, allowing the cylinder head to remain at the same height.

A rocker arm and two types of links open the intake-valves by transferring the rotational movement of a drive shaft with an eccentric cam to the output cam. The movement of the output cam is varied by rotating the control shaft with a DC stepper motor and changing the fulcrums of the links. This makes the continuous adjustment of the amount of the valve's lift (e.g., the amount of intake opening), during the intake valve event in the four-stroke cycle, possible. C-VTC and VVEL together control the valve phases and its valve events, allowing free-control of the valve timing and lift. This results in more efficient airflow to the cylinder, significantly improved responsiveness, optimizing the balance between power and environmental performance.

It performs similarly to BMW's Valvetronic system but with desmodromic control of the output cam, allowing VVEL to operate at higher engine speeds (RPM). Other similar systems are offered Toyota (Valvematic).