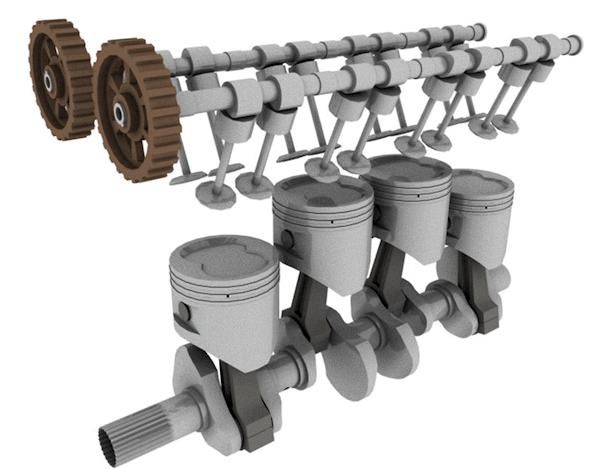 A valve train or valvetrain is a device that controls the operation of the valves.,in which a sequence of components transmits motion throughout the assembly. A traditional reciprocating internal combustion engine uses valves to control air and fuel flow into and out of the cylinders, facilitating combustion.

The valve train consists of valves, rocker arms, pushrods, lifters, and camshaft(s).Valve train opening/closing and duration, as well as the geometry of the valve train, controls the amount of air and fuel entering the combustion chamber at any given point in time. Timing for open/close/duration is controlled by the camshaft that is synchronized to the crankshaft by a chain, belt or gear.

Valve trains are built in several configurations, each of which varies slightly in layout but still performs the task of opening and closing the valves at the time necessary for proper operation of the engine. These layouts are differentiated by the location of the camshaft within the engine:

Overhead camshaft
The camshaft (or camshafts, depending on the design employed) is located above the valves within the cylinder head, and operates either indirectly or directly on the valves.

Cam-in-block
The camshaft is located within the engine block, and operates directly on the valves, or indirectly via pushrods and rocker arms. Because they often require pushrods they are often called pushrod engines.

Camless
This layout uses no camshafts at all. Technologies such as Solenoids are used to individually actuate the valves.

As stated above, the valve train is the mechanical system responsible for operation of the valves. Valves are usually of the poppet type, although many others have been developed such as sleeve, slide and rotary valves.

Poppet valves typically require small coil springs, appropriately named valve springs, to keep them closed when not actuated by the camshaft. They are attached to the valve stem ends, seating within spring retainers. Other mechanisms can be used in place of valve springs to keep the valves closed: Formula 1 engines employ pneumatic valve springs in which pneumatic pressure closes the valves, while motorcycle manufacturer Ducati uses desmodromic mechanisms to mechanically close the valves.

Camshafts must actuate the valves at the appropriate time in the combustion cycle. In order to accomplish this the camshaft is linked to and kept in synchronisation with the crankshaft (the main shaft upon which the pistons act) through the use of a metal chain, rubber belt or geartrain. Because these mechanisms are essential to the proper timing of valve actuation they are named timing chains, timing belts and timing gears, respectively.