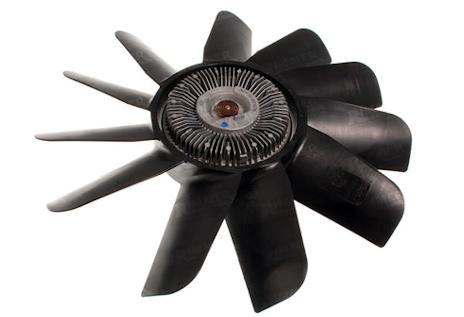 A fan clutch is a thermostatic device that exists as an integral component of certain automotive cooling systems.

When the engine is cool or even at normal operating temperature, the fan clutch partially disengages the engine's mechanically-driven radiator cooling fan, generally located at the front of the water pump and driven by a belt and pulley connected to the engine's crankshaft. This saves power, since the engine does not have to fully drive the fan.

However, if engine temperature rises above the clutch's engagement temperature setting, the fan becomes fully engaged, thus drawing a higher volume of ambient air through the vehicle's radiator, which in turn serves to maintain or lower the engine coolant temperature to an acceptable level.

Mechanical fans are most common in trucks and SUVs, and some RWD cars. This is easier to accomplish because the engine is mounted longitudinally, with the belt accessory components mounted facing the radiator. The fan will spin in between the radiator and the engine to help with cooling.

A fan clutch is as reliable as any other component on a vehicle, yet sometimes they fail. A common symptom of fan clutch failure is overheating at idle or in heavy traffic. Bad fan clutches can also cause poor performance of the car's air conditioning system because the fan also cools the air conditioner's condenser, which is directly in front of the radiator. A fan clutch can also fail in a stuck on position where engine power is lost even when the fan is not necessary. This type of failure can also decrease fuel economy.

Another potential symptom of fan clutch failure (always drawing air at a high rate) in a cold weather climate is that the heating system blows lukewarm air never delivering sufficient hot air. The bearings in the fan clutch can be worn, causing extra grinding sound from the engine area.