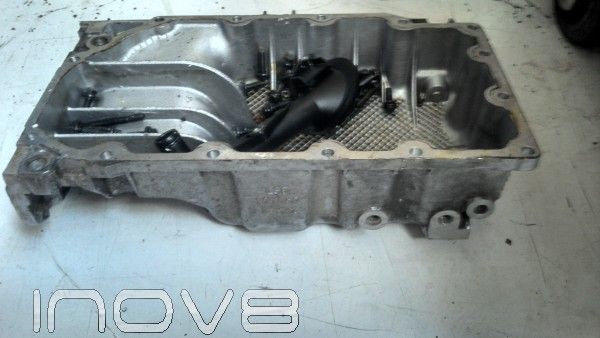 A wet sump is a lubricating oil management design for piston engines which uses the crankcase as a built-in reservoir for oil, as opposed to an external or secondary reservoir used in a dry sump design.

Piston engines are lubricated by oil which is pumped into various bearings, and thereafter allowed to drain to the base of the engine under gravity. In most production automobiles and motorcycles, which use a wet sump system, the oil is collected in a 3 to 10 litres (0.66 to 2.2 imp gal; 0.79 to 2.6 US gal) capacity pan at the base of the engine, known as the sump or oil pan, where it is pumped back up to the bearings by the oil pump, internal to the engine.

A wet sump offers the advantage of a simple design, using a single pump and no external reservoir. Since the sump is internal, there is no need for hoses or tubes connecting the engine to an external sump which may leak. An internal oil pump is generally more difficult to replace, but that is dependent on the engine design.

A wet sump design can be problematic in a racing car, as the large g force pulled by drivers going around corners causes the oil in the pan to slosh, gravitating away from the oil pick-up, briefly starving the system of oil and damaging the engine. However, on a motorcycle this difficulty does not arise, as a bike leans into corners and the oil is not displaced sideways. Nevertheless, racing motorcycles usually benefit from dry sump lubrication, as this allows the engine to be mounted lower in the frame; and a remote oil tank can permit better lubricant cooling.

Early stationary engines employed a small scoop on the extremity of the crankshaft or connecting rod to assist with the lubrication of the cylinder walls by means of a splashing action. Modern small engines, such as those used in lawnmowers, use a "slinger" (basically a paddle wheel) to perform the same function