Car Alternator How it works 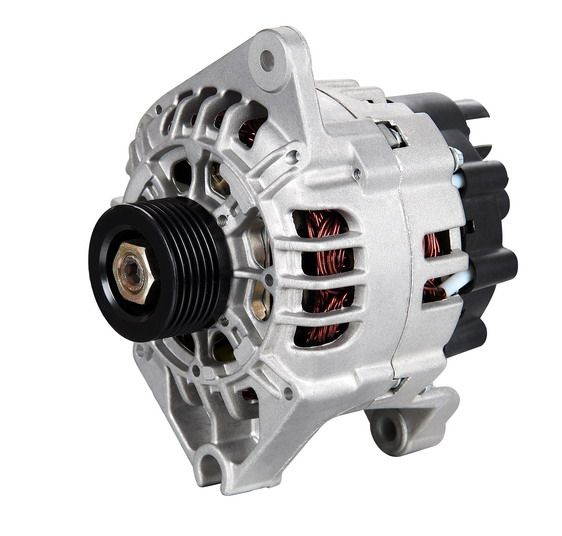 The alternator produces electricity used to maintain battery storage charge and to help run all the electrical accessories, including the ignition and the engine control systems. It is belt-driven by the engine and produces an alternating current (AC), which is converted internally to 12 volts direct current (DC) by the diode bridge or rectifiers.

AC current cannot be stored but is much more efficiently produced, which is why cars no longer use generators but use alternators and convert the electricity to DC. Most alternators now use internal voltage regulators to maintain the proper system voltage, from 12.6-14.5 volts. You should check your car's repair manual or with your local dealer to obtain the exact proper voltage for your car.

Contrary to popular belief, an alternator does not constantly produce electricity. It cycles on and off as demand goes up and down. The battery buffers it from the electrical demands of the car, and it only works enough to maintain system voltage. At peak efficiency and for longest life, the alternator should be charging no more than about 50% of the time.

However, with the demands placed on the system by heat and by extraneous electrical devices (i.e., high powered stereos, running lights, etc. - see Power Demand Chart below), the alternator and battery are stressed even further. The average alternator now is lucky to last 3-4 years, which is why a prematurely dead battery may actually be caused by a dead alternator.

Typical Power Demands on a car's charging system are as follows:

And this doesn't include amperage requirements for items like cell phones, laptops, CD players, boom boxes or additional lights.

Understanding the importance of having an operational warning light for the alternator (idiot light) is crucial to catching problems early. In most modern systems, the electrical current passing through the filament of the warning light is what energizes a circuit in the alternator to start charging.

This signal light is linked directly to the alternator through its terminal (#1, I, L, D+, etc. depending on the brand) and functions slightly differently on different manufacturers.

To check the warning light circuit, turn the ignition switch to the "on" position without cranking or starting the engine; if the idiot light does not come on, remove the plug from the alternator and ground the wire that terminates to the #1, I, L or D+ terminal (depending on manufacturer). If the light comes on, the wiring is okay but the alternator is defective; if the light still does not come on, the wiring to the light circuit and the bulb should be checked.

Don't forget to check the fuse that controls the light circuit, too. This fuse could be labeled differently in various cars. It could be labeled "charging", "regulator", "meters", "gauges" or "engine". In some cars, if the fuse is out, the idiot light will come on but may not go off. In others (like GM), a burned out fuse may make the warning light work in reverse order; that is, when the key is on, the light is off but as soon as the engine starts and the alternator starts charging, the light will come on.

Checking out these simple circuits first can greatly reduce your troubleshooting time and unnecessary replacement of your alternator.

As we delve further into charge light indicators, we find that in some cases it is normal for the charge indicator light to come on when nothing is wrong with the alternator.

According to information published by GM, any car may have a low voltage reading or lights that dim when electrical loads are heavy at idle. Furthermore, this condition is normal and no repairs should be attempted unless a fault has been found.

For clarification, as a car idles for extended periods of time during high heat conditions, a number of things happen that contribute to "lowered" alternator output that coincides with physics and the design of the alternator:

2.  As temperature rises, the voltage setpoint of the regulator is lowered to reduce the chance of overcharging or "boiling" the battery.

3.  Newer designed alternators have a "delay/soft start" built into the regulator circuit. This delays the load being placed upon the engine when starting up from a stop, so that the smaller engines in use today are not loaded down upon acceleration due to charging demands. This can delay the charging by up to 15 seconds. 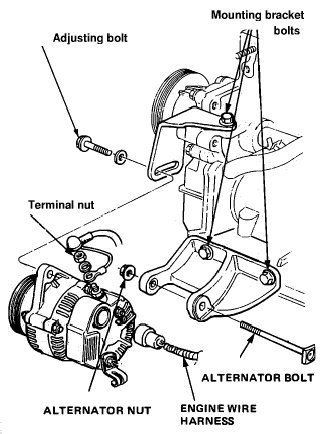