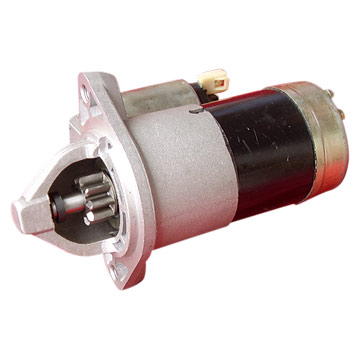 The other major electrical component in your car's electrical system is used only a few times a day but is the single largest power user and most critical to your car's operation - its starter. The starter is simply a DC motor that turns the engine crankshaft through the flywheel, starting the combustion process by creating compression within the cylinders. Voltage to the starter is supplied directly from the battery and is controlled by a relay and/or solenoid operated from the key switch inside your car.

Starters can be of varying types and designs - gear-reduction types for higher torque, permanent-magnet types to reduce size and weight, or just plain, old-fashioned heavy starters. But whatever the type, they all function in the same basic way.

A slow cranking engine may be a sign of a bad starter and with age, that's more and more likely. But on most cars today, it's due to low battery voltage, poor electrical connections at the battery or a failed relay or fusible link. 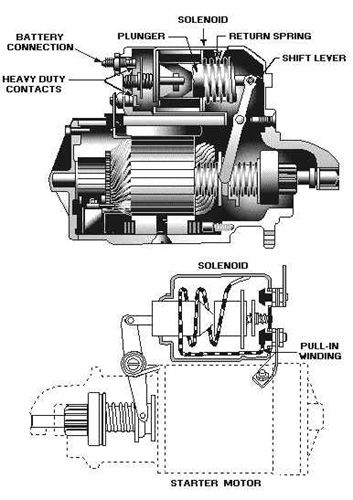 Most starters will easily outlast a new vehicle warranty if it's not overused, if good connections are maintained and if it's not overheated through dirt and grime buildup.

Starting your car with the major components turned off (like the AC compressor, blower motor and high-powered stereos) will greatly ease the load on the starter. In fact, most new cars have "lock out" relays that will not allow the AC compressor and alternator to turn on until after the vehicle has been started. But turning these power-hogs off before shutting off your car is always a good precaution.

Although the starter drive, or "Bendix" as it was commonly referred to, can be replaced separately from the starter assembly, it's rarely recommended anymore. Failure of any part is due to age, usage and heat stress, to which the entire starter has also been subjected, so that other parts are just as old and stressed. It's quite common to replace the starter drive only to have to buy another starter in a few months because the brushes wore out, a magnet broke, the solenoid failed, among other common mishaps. Replace the starter as a unit and have the electrical system checked at the same time to prevent further problems. 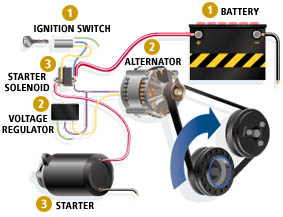