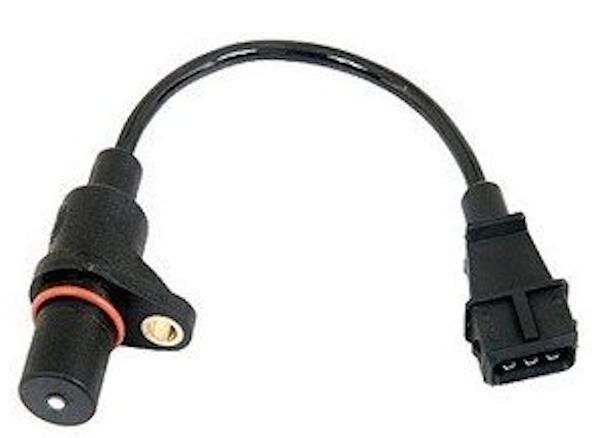 A crank position sensor is an electronic device used in an internal combustion engine to monitor the position or rotational speed of the crankshaft. This information is used by engine management systems to control ignition system timing and other engine parameters. Before electronic crank sensors were available, the distributor would have to be manually adjusted to a timing mark on the engine.

The crank sensor can be used in combination with a similar camshaft position sensor to monitor the relationship between the pistons and valves in the engine, which is particularly important in engines with variable valve timing. This method is also used to "synchronise" a four stroke engine upon starting, allowing the management system to know when to inject the fuel. It is also commonly used as the primary source for the measurement of engine speed in revolutions per minute.

Common mounting locations include the main crank pulley, the flywheel, the camshaft or on the crankshaft itself. This sensor is the most important sensor in modern day engines. When it fails, there is a chance the engine will not start, or cut out while running.

Commonly a hall effect sensor is used, which is placed adjacent to a spinning steel disk. Other detection principles can be employed such as an optical sensor or inductive sensor.

The functional objective for the crankshaft position sensor is to determine the position and/or rotational speed (RPM) of the crank. Engine Control Units use the information transmitted by the sensor to control parameters such as ignition timing and fuel injection timing. The sensor output can also be related to other sensor data including the cam position to derive the current combustion cycle, this is very important for the starting of a four stroke engine.

Sometimes the sensor may become burnt or worn out. The most likely causes of crankshaft position sensor failure are exposure to extreme heat when you have a gasket or crank problem, contamination from oil or other engine fluids that leaked onto the sensor, or wear over a long period of time. When it goes bad, it stops transmitting the signal which contains the vital data for the ignition and other parts in the system.

A bad crank position sensor can worsen the way the engine idles, the pistons fire, or the acceleration behavior. If the engine is revved up with a bad or faulty sensor, it may cause misfiring, motor vibration or backfires. Accelerating might be hesitant, and abnormal shaking during engine idle might occur. In the worst case the car may not start.

The first sign of crankshaft sensor failure, usually, is the refusal of the engine to start when hot but will start again once the engine has cooled.