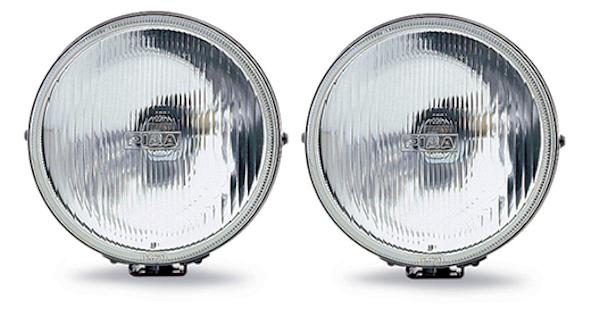 "Driving lamp" is a term deriving from the early days of nighttime driving, when it was relatively rare to encounter an opposing vehicle.Only on those occasions when opposing drivers passed each other would the dipped or "passing" beam be used.

The full beam was therefore known as the "driving beam", and this terminology is still found in international UN Regulations, which do not distinguish between a vehicle's primary (mandatory) and auxiliary (optional) upper/driving beam lamps.

The "driving beam" term has been supplanted in US regulations by the functionally descriptive term "auxiliary high-beam lamp".

They are most notably fitted on rallying cars, and are occasionally fitted to production vehicles derived from or imitating such cars. They are common in countries with large stretches of unlit roads, or in regions such as the Nordic countries  where the period of daylight is short during winter. Many countries regulate the installation and use of driving lamps. For example, in Russia each vehicle may have no more than three pairs of lights including the original-equipment items, and in Paraguay auxiliary driving lamps must be off and covered with opaque material when the vehicle is circulating in urban areas.