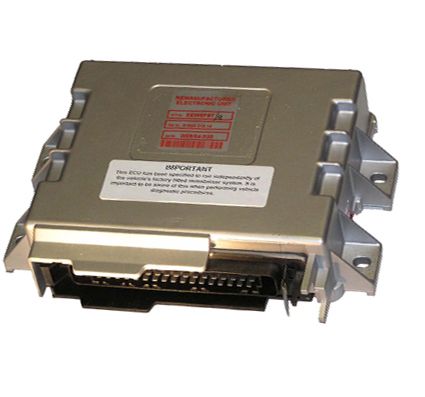 When you first turn the key and the engine is cold, the coolant is cold, the fuel is cold, the oxygen sensors are cold and the engine just isn’t in its happy spot. This is called cold start mode. In this case, the ECU has
to squirt a different amount of fuel (more) to get the car running than when everything is nice and warm.

There is a warm  start mode as well, when the engine  is warm,  but isn’t firing and the speed is slow, with the crank being turned by just the starter. This mode requires more fuel than standard operation, but not as much as cold start.In the idle mode, the engine has to spin at low rpm and keep spinning at this speed when lights or A/C are turned on or off. While keeping idle speed smooth is more complicated than you would first think, we won’t discuss it here. Just keep in mind that the ECU keeps track of the engine rpm, the changing load, and keeps the engine speed constant.Under engine braking mode, when you’ve taken your foot off the gas and are decelerating, the ECU stops running the injectors all together, to improve fuel economy.

However, most driving  is in a cruise or light load mode with the car at normal operating temperature. Many refer to this as “closed-loop” operation because the controls on the engine inputs are determined by the engine output which in turn is affected by the engine input (a “closed loop” in computer terms). When the car is running in this mode, theECU uses the look-up tables to figure out what to do, but modifies these settings by looking at the output of the first oxygen sensor, so that the amount of fuel injected can be tuned for best emissions without giving up much in power.

If you’re wondering why the ECU modifies the settings, the first reason is something called tolerance stacking, and this is just the fact that every en- gine isn’t exactly the same. Parts are not manufactured to precise measures, but instead are manufactured within tolerances to the ideal measurement, and all these variations from ideal add up, or stack.The second reason is engine wear and tear. As the parts wear down, and deposits are built up on the valves, in the cylinders and in the injec- tors, the engine’s behavior isn’t exactly the same as when it left the fac- tory, so the look-up tables don’t apply exactly.

The third reason is variations in gasoline. While it’s all called gasoline, the quality and energy content  can vary greatly by region, by season, or even supplier.And lastly, there are variations in ambient conditions. Water vapor in the air (humidity) which won’t burn, displaces air, but the sensors don’t differentiate between air and water vapor. So the oxygen sensor in the exhaust pipe looks at the amount  of unburned  air (fuel?) in the exhaust, and tunes the injection timing to make sure that the right amount of gas is used. This also aids in the efficiency of the catalytic converter, keeping emissions down and our air (relatively) clean.

"The ECU does more than just run the engine".

One of the most im-portant functions  is to protect the engine from unexpected problems, including both mechanical failures and driver errors.The rpm limit is very easy to understand. The engine is built to spin up to some amazing speeds, but when those speeds are exceeded, com- ponents start to bend, break, or fail.To avoid this, when the engine hits a pre-programmed rpm limit, it just stops injecting fuel into one or more of the cylinders.You go from a four-banger to a three-banger, and there’s no more power to spin the engine faster. It just stops accelerating. But it also protects the engine for over-revving under acceleration. If you hit the rev limit, you’ll know it because all of a sudden, it will feel like the engine is broken… but don’t worry, it’s not!But there is one important  aspect of this type of rev limiter to keep in mind. It won’t protect the engine from over-revving if you downshift into the wrong gear. Then the momentum  of the car is what is accelerating the engine, and all hell can break loose (as well as pistons,  connecting  rods, valves… you get the idea). So our rpm limiter isn’t perfect, but it will protect  the engine from excessive acceleration.A second protection system function  is pretty  easy to understand as well.When  gasses are compressed, they heat. That’s just the way it is. If the air charge going into the cylinder is already very hot, it can reach tempera- tures under compression when it can spontaneously detonate, and do this prematurely. This is bad, and will damage the engine.So when the ECU detects that the air temperature in the intake mani- fold is too high, it will inject more gasoline than is needed for power gener- ation. It takes a lot of energy to turn the liquid fuel into vapor, and this will cool the air charge. And rich mixtures burn cooler, helping even more.For those who are familiar with water injection, this is just the ECU using gasoline for the very same function: to cool the intake charge, and prevent detonation.

This protection system doesn’t really kick in for day- to-day operation, but it could become significant if you’re doing a lot of work on a dyno, when the car is working hard, and there’s no air-flow to cool the intake charge via the intercooler.The most important  protection system is based on the knock sensor.It is a microphone that is bolted to the engine block to literally “listen” for the onset of detonation, often called “ping” or “knock.” Detonation, or explosion of part of the fuel-air mixture from excessively high pressure or temperature before it has time to burn, is very bad. If it is allowed to get too severe, it will melt or pop a hole in the top of a piston:  A very, very expensive event.To prevent this in normal operation, additives are added to the gasoline to increase its octane, and improve its burn to minimize detonation. But it can also be controlled by tuning the engine to increase burn time.So why not just tune the engine to stay away from conditions that lead to knock? Because if Mini did that, the tune would be so conservative that our engines wouldn’t be able to deliver nearly the power that is avail- able. So the engine has the knock sensor, and it’s tuned more aggressively, so that we all can have much more fun driving our little cars! And this function cannot be done without an ECU. When the knock sensor hears the onset of knock, the ECU pulls back the timing on the engine. This delays the combustion,  reducing cylinder pressures (but also reducing power and fuel efficiency).