Workings of a ECU 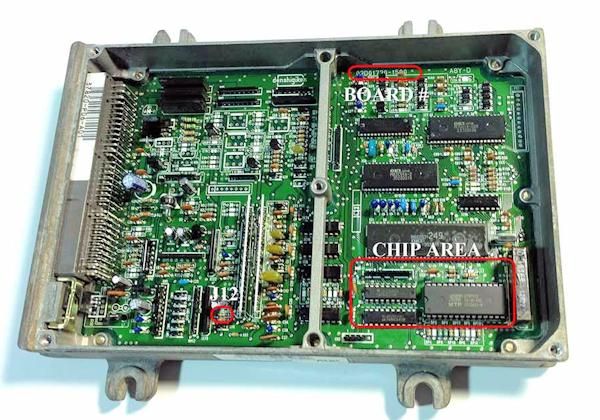 An engine control unit (ECU), most commonly called the powertrain control module (PCM), is a type of electronic control unit that controls a series of actuators on an internal combustion engine to ensure the optimum running. It does this by reading values from a multitude of sensors within the engine bay, interpreting the data using multidimensional performance maps (called Look-up tables), and adjusting the engine actuators accordingly.

Before ECUs, air/fuel mixture, ignition timing, and idle speed were mechanically set and dynamically controlled by mechanical and pneumatic means. One of the earliest attempts to use such a unitized and automated device to manage multiple engine control functions simultaneously was the "Kommandogerät" created by BMW in 1939, for their 801 14-cylinder aviation radial engine. This device changed replaced the 6 controls used to initiate hard acceleration to one control in the 801 series-equipped aircraft. However, it had some problems: it would surge the engine, making close formation flying of the Fw 190 somewhat difficult, and at first it switched supercharger gears harshly and at random, which could throw the aircraft into an extremely dangerous stall or spin.

For an engine with fuel injection, an engine control unit (ECU) will determine the quantity of fuel to inject based on a number of parameters. If the Throttle position sensor is showing the throttle pedal is pressed further down, the Mass flow sensor will measure the amount of additional air being sucked into the engine and the ECU will inject fixed quantity of fuel into the engine ( most of the engine fuel inlet quantity is fixed). If the Engine coolant temperature sensor is showing the engine has not warmed up yet, more fuel will be injected (causing the engine to run slightly 'rich' until the engine warms up). Mixture control on computer controlled carburetors works similarly but with a mixture control solenoid or stepper motor incorporated in the float bowl of the carburetor.

A spark ignition engine requires a spark to initiate combustion in the combustion chamber. An ECU can adjust the exact timing of the spark (called ignition timing) to provide better power and economy. If the ECU detects knock, a condition which is potentially destructive to engines, and "judges" it to be the result of the ignition timing being too early in the compression stroke, it will delay (retard) the timing of the spark to prevent this. Since knock tends to occur more easily at lower rpm, the ECU may send a signal for the automatic transmission to downshift as a first attempt to alleviate knock.

Some engines have Variable Valve Timing. In such an engine, the ECU controls the time in the engine cycle at which the valves open. The valves are usually opened sooner at higher speed than at lower speed. This can optimize the flow of air into the cylinder, increasing power and economy.

Experimental engines have been made and tested that have no camshaft, but have full electronic control of the intake and exhaust valve opening, valve closing and area of the valve opening.Such engines can be started and run without a starter motor for certain multi-cylinder engines equipped with precision timed electronic ignition and fuel injection. Such a static-start engine would provide the efficiency and pollution-reduction improvements of a mild hybrid-electric drive, but without the expense and complexity of an oversized starter motor.

The first production engine of this type was invented ( in 2002) and introduced (in 2009) by Italian automaker Fiat in the Alfa Romeo MiTo. Their Multiair engines use electronic valve control which drastically improve torque and horsepower, while reducing fuel consumption as much as 15%. Basically, the valves are opened by hydraulic pumps, which are operated by the ECU. The valves can open several times per intake stroke, based on engine load. The ECU then decides how much fuel should be injected to optimize combustion.

For instance, when driving at a steady speed, the valve will open and a bit of fuel will be injected, the valve then closes. But, when you suddenly stamp on the throttle, the valve will open again in that same intake stroke and much more fuel will be injected so that you start to accelerate immediately. The ECU then calculates engine load at that exact RPM and decides how to open the valve: early, or late, wide open, or just half open. The optimal opening and timing are always reached and combustion is as precise as possible. This, of course, is impossible with a normal camshaft, which opens the valve for the whole intake period, and always to full lift.

And not to be overlooked, the elimination of cams, lifters, rockers, and timing set not only reduces weight and bulk, but also friction. A significant portion of the power that an engine actually produces is used up just driving the valve train, compressing all those valve springs thousands of times a minute.

Once more fully developed, electronic valve operation will yield even more benefits. Cylinder deactivation, for instance, could be made much more fuel efficient if the intake valve could be opened on every downstroke and the exhaust valve opened on every upstroke of the deactivated cylinder or "dead hole". Another even more significant advancement will be the elimination of the convention throttle. When a car is run at part throttle, this interruption in the airflow causes excess vacuum, which causes the engine to use up valuable energy acting as a vacuum pump. BMW attempted to get around this on their V-10 powered M5, which had individual throttle butterflies for each cylinder, placed just before the intake valves. With electronic valve operation, it will be possible to control engine speed by regulating valve lift. At part throttle, when less air and gas are needed, the valve lift would not be as great. Full throttle is achieved when the gas pedal is depressed, sending an electronic signal to the ECU, which in turn regulates the lift of each valve event, and opens it all the way up.

Hybrid digital/analog designs were popular in the mid 1980s. This used analog techniques to measure and process input parameters from the engine, then used a look-up table stored in a digital ROM chip to yield precomputed output values. Later systems compute these outputs dynamically. The ROM type of system is amenable to tuning if one knows the system well. The disadvantage of such systems is that the precomputed values are only optimal for an idealised, new engine. As the engine wears, the system is less able to compensate than a CPU based system.

Modern ECUs use a microprocessor which can process the inputs from the engine sensors in real time. An electronic control unit contains the hardware and software (firmware). The hardware consists of electronic components on a printed circuit board (PCB), ceramic substrate or a thin laminate substrate. The main component on this circuit board is a microcontroller chip (CPU). The software is stored in the microcontroller or other chips on the PCB, typically in EPROMs or flash memory so the CPU can be re-programmed by uploading updated code or replacing chips. This is also referred to as an (electronic) Engine Management System (EMS).

Sophisticated engine management systems receive inputs from other sources, and control other parts of the engine; for instance, some variable valve timing systems are electronically controlled, and turbocharger wastegates can also be managed. They also may communicate with transmission control units or directly interface electronically-controlled automatic transmissions, traction control systems, and the like. The Controller Area Network or CAN bus automotive network is often used to achieve communication between these devices.

General Motors'(GM) first ECUs had a small application of hybrid digital ECUs as a pilot program in 1979, but by 1980, all active programs were using microprocessor based systems. Due to the large ramp up of volume of ECUs that were produced to meet the Clean Air Act requirements for 1981, only one ECU model could be built for the 1981 model year. The high volume ECU that was installed in GM vehicles from the first high volume year, 1981, onward was a modern microprocessor based system. GM moved rapidly to replace carburation with fuel injection as the preferred method of fuel delivery for vehicles it manufactured. This process first saw fruition in 1980 with fuel injected Cadillac engines, followed by the Pontiac 2.5L I4 "Iron Duke" and the Chevrolet 5.7L V8 L83 "Cross-Fire" engine powering the Chevrolet Corvette in 1982. The 1990 Cadillac Brougham powered by the Oldsmobile 5.0L V8 LV2 engine was the last carbureted passenger car manufactured for sale in the North American market (a 1992 Volkswagen Beetle model powered by a carbureted engine was available for purchase in Mexico but not offered for sale in the United States or Canada) and by 1991 GM was the last of the major US and Japanese automakers to abandon carburation and manufacture all of its passenger cars exclusively with fuel injected engines. In 1988 Delco (GM's electronics division), had produced more than 28,000 ECUs per day, making it the world's largest producer of on-board digital control computers at the time.

Such systems are used for many internal combustion engines in other applications. In aeronautical applications, the systems are known as "FADECs" (Full Authority Digital Engine Controls). This kind of electronic control is less common in piston-engined light fixed-wing aircraft and helicopters than in automobiles. This is due to the common configuration of a carbureted engine with a magneto ignition system that does not require electrical power generated by an alternator to run, which is considered a safety advantage.