Emergency brake assist (EBA) or Brake Assist (BA or BAS) is a generic term for an automobile braking technology that increases braking pressure in an emergency situation. The first application was developed jointly by Daimler-Benz and TRW/LucasVarity. Research conducted in 1992 at the Mercedes-Benz driving simulator in Berlin revealed that more than 90% of drivers fail to brake with enough force in emergency situations.

Many drivers are not prepared for the relatively high efforts required for maximum braking, nor are they prepared for the "buzzing" feedback through the brake pedal during ABS operation. If an emergency develops, a slow reaction and less than maximum braking input could result in insufficient time or distance to stop before an accident occurs.

EBA is designed to detect such "panic stops" and apply maximum braking effort within milliseconds. It interprets braking behaviour by assessing the rate that the brake pedal is activated.

If the system identifies an emergency, it automatically initiates full braking faster than any driver can move their foot. Emergency stopping distances can be shortened, reducing the likelihood of accidents – especially the common "nose to tail" incident.

An electronic system designed to recognise emergency braking operation and automatically enhance braking effort improves vehicle and occupant safety, and can reduce stopping distances by up to 70 ft (21 m) at 125 mph (201 km/h)

Brake Assist detects circumstances in which emergency braking is required by measuring the speed with which the brake pedal is depressed. Some systems additionally take into account the rapidity of which the accelerator pedal is released, pre-tensioning the brakes when a "panic release" of the accelerator pedal is noted. When panic braking is detected, the Brake Assist system automatically develops maximum brake boost in order to mitigate a drivers tendency to brake without enough force. In doing so, Brake Assist has been shown to reduce stopping distance by a significant margin; up to 20% in some studies.

In December 1996 BAS premiered to the world on the Mercedes-Benz S-Class and SL-Class. In 1998 Mercedes-Benz became the first company to make Brake Assist standard equipment on all its models; other brands including Volvo and BMW soon followed suit.

Other systems like the Volvo CWAB (see below) are also available such as the Mercedes-Benz Brake Assist Plus (BAS Plus) was first made standard equipment on the W221 (2006 onwards) S-Class Mercedes-Benz. This system works much like the Volvo system with a warning and precharging of the brakes but will not automatically brake for you. The BAS Plus system has been shown to significantly reduce the incidence of rear-end collisions, and so is very significant in the development of driver aids that improve road safety.

The Volvo system Collision Warning with Auto Brake 'CWAB' uses a radar to detect when a collision is likely and will pre-charge the brakes so that when the driver uses the brakes, however lightly, full braking is applied. The system will also flash a light and make a warning sound. If the driver does not respond to the warning at the point where a collision cannot be avoided the system will apply the brakes automatically and dramatically reduce the speed of the collision.

Volvo cars can also be equipped with the City Safety System which automatically brakes in stop start traffic. Mercedes-Benz also has a similar system called Distronic Plus.

Both the Volvo and the Mercedes-Benz radar systems are also used for the speed/distance regulated cruise control systems used by both manufacturers. 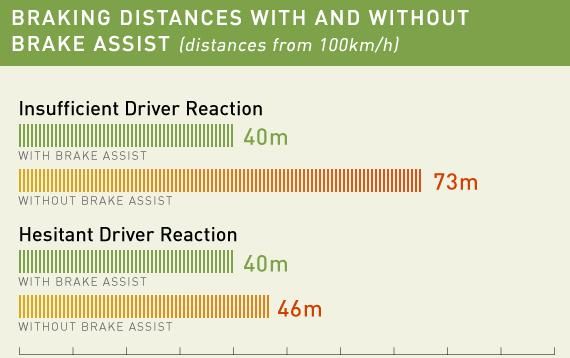