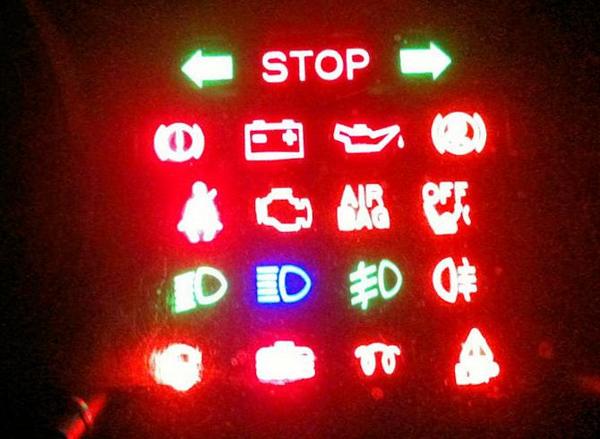 A tell-tale (or idiot light, especially in North America) is an indicator of the status or malfunction of a system within a motor vehicle. A tell-tales consists of a light bulb or an LED which lights up a symbol or text legend. The "idiot light" terminology arises from popular frustration with automakers' use of tell-tales for crucial functions which could previously be monitored by gauges, so a troublesome condition could be detected and corrected early. Such early detection of problems with, for example, engine temperature or oil pressure or charging system operation is not possible via a tell-tale, which usually illuminates only once a fault has already occurred – thus providing no advance warnings or details of the malfunction's extent. The Hudson automobile company was the first to use lights instead of gauges for oil pressure and the voltmeter, starting in the mid-1930s.

Automotive tell-tales are regulated by automobile safety standards worldwide. In the United States, National Highway Traffic Safety Administration Federal Motor Vehicle Safety Standard 101 includes tell-tales in its specifications for vehicle controls and displays. In Canada, the analogous Canada Motor Vehicle Safety Standard 101 applies.In Europe and throughout most of the rest of the world, ECE Regulations specify various types of tell-tales.

Some tell-tales indicate whether critical vehicle systems are running and operating properly. To test the lamps, many tell-tales can illuminate when the vehicle ignition is turned on, but before the engine is started, in order to prove that they are working.

The oil pressure tell-tale lights when engine oil pressure drops below a predetermined level. This tell-tale can bear the legend oil or a pictogram of an oil can. Some cars illuminate the light red or yellow, depending on the action needed to be taken.

A "malfunction indicator lamp" (MIL) or "check engine light" (CEL) illuminates, usually in red, amber, or yellow, to indicate malfunction or service required in the computerized engine management system. It is found on the instrument console of most automobiles. In the United States, an MIL with specified functions is required by environmental protection regulations.

On vehicles equipped with OBD-II, the light has two stages: it burns steadily to indicate a minor fault such as a loose gas cap or malfunction with the vehicle's emissions controls, and it flashes repeatedly when a severe misfire is detected to alert the driver the potential of severe engines or catalyst damages. The MIL can present a legend, such as check engine, power limited, engine, or service engine soon; or it also can present a pictogram of an engine.

Some vehicles have a MIL illuminating predetermined distance intervals, without regard to actual condition or status of any system or device. Volvo, for example, used a light labeled lambda or Λ, "Lambda Sond" being another name for oxygen sensor. This was done to remind the driver to change the oxygen sensor.

Some vehicles were built by Chrysler between 1973 and 1990 and some Toyota-built vehicles have a similar mileage-indicator light presenting various legends such as check egr or maint reqd; once the indicated inspection or service is completed, the light can be reset and come on again after the next pre-determined distance has passed

Honda uses a wrench symbol to indicate that an oil change or other regular maintenance is due.

A tell-tale can be installed to indicate that the vehicle's alternator or generator is not properly charging the battery, which would eventually under this condition and become discharged. The light normally appears when the vehicle ignition is turned on, but the engine is not running, as it detects that no power is coming from the alternator, and subsequently extinguishes as soon as the engine starts and the alternator starts generating electricity. This light presents a pictogram of a battery, or it presents the legend amp or batt or gen.

Some vehicles had a single indicator labeled trouble or engine; this was not a Check Engine Light, but a catch-all warning light to indicate trouble that was serious enough to portend an imminent breakdown. Early 1980s Fords, such as the LTD Crown Victoria, without the instrument option, had only this light, which indicated low oil pressure, overheating and carburetion problems without distinguishing among them. This usage of the "engine" light was discontinued in the mid-1980s to prevent confusion with the MIL

Many tell-tales indicate that a device or system has been switched on, or is operating.

US, Canadian, and international European regulations require tell-tales to indicate to the driver that various vehicle lighting functions are operating. Such functions include the high beam headlamps, the turn signals, the daytime running lights, the front fog lamps, and the rear fog lamps.

Vehicles equipped with a backglass defogger have a tell-tale to indicate when the system is switched on and operating.

Vehicles with anti-lock braking system (ABS) have a lamp to indicate a detected failure.

As automobiles became increasingly complex, more dashboard indicator lights have been added for the status of safety and convenience systems. Lights can indicate many conditions including: