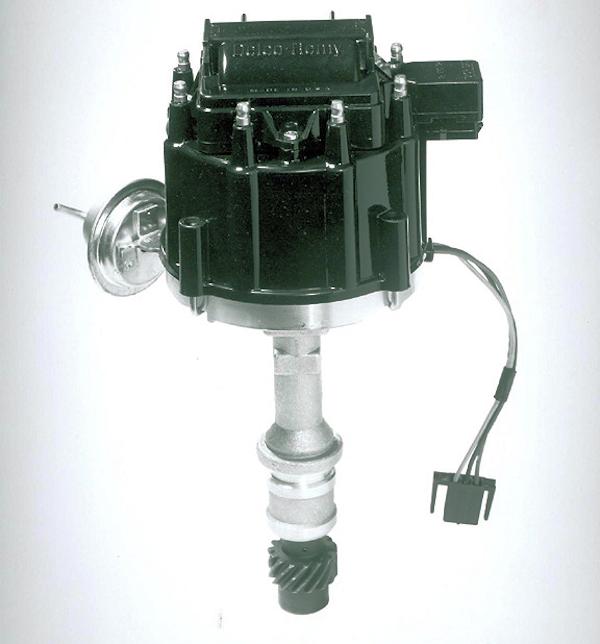 High energy ignition, also known as H.E.I., is an electronic ignition system designed by Delco-Remy Division of General Motors and introduced by General Motors around May 1974 on most GM engines. It was used on all engines in 1975 through the mid-1980s. There were many design variations over the years and provisions for computer controls were added in for some applications starting in the late 70's. A predecessor system was optional on Pontiacs as "code 704 UPC K65 unitized ignition system" for the 1972-73 model year.

HEI is characterised by the incorporation of the coil built into the distributor cap for most applications. The system consists of a control module and a magnetic pickup mounted in the distributor. This eliminated ignition points and the coil wire. The control module basically performs the same function as the breaker points in a points & condenser system.

HEI distributors are a popular swap on older GM cars originally equipped with points & condenser type ignition systems. The HEI system produces a more powerful spark, which allows for a wider spark plug gap. This ignites the fuel quicker, resulting in faster, more reliable starting and a more powerful burn. Add-on ignition spark amplifiers allow for the conversion of a HEI Distributor system to a VHEI or Very High Energy Ignition system further increasing the net output energy of a HEI spark. A well-tuned HEI can produce up to 40,000 volts, compared to about 18,000 volts for the points system. Another reason for this is the self-contained plug-and-play nature of these systems. All the system needs is an ignition switch controlled 12 volt source that is live in both the "crank" and "run" positions. To wire the system, the ballast resistor wire feeding the points-type coil needs to be removed and replaced with regular copper wire. This is because the points system used this resistor to reduce the voltage to the coil to around 9 volts while the switch is in the "run" position to prevent the points from burning up too fast. The coil on the points system is also supplied by a "bypass" wire from the starter solenoid. This wire bypasses the resistor wire to compensate for the voltage drop caused by the starter motor during cranking. The HEI system needs the full battery voltage at all times to work its best. One common hookup method is to replace the ballast resistor wire with a normal copper wire and attach both wires to the power input terminal. This ensures the HEI receives power both during cranking and running.

The choice in HEI system type is vitally important based on the engine it will be used with. Each GM division had its own engine design. Thus, a Chevrolet distributor will not fit on an Oldsmobile, Pontiac, Buick, or Cadillac engine. Also, the module type is important as well. For non-computer controlled carbureted engines, the four-pin unit is used since it uses mechanical timing controls (vacuum and mechanical advance). The seven-pin module can be used on non-computerized engines since it does not contain mechanical timing controls, but some early designs used a seven-pin in a distributor with mechanical and vacuum advance in the distributor body, so the seven-pin module would be backward compatible