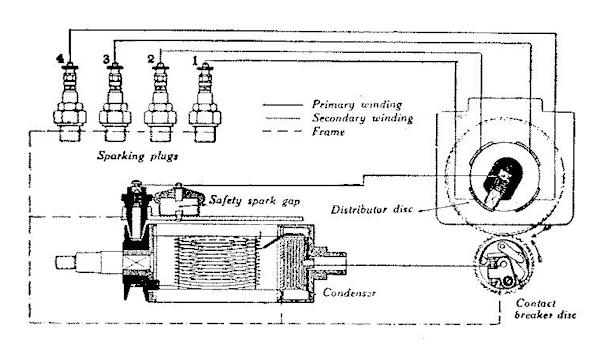 An ignition magneto is a magneto that provides current for the ignition system of a spark-ignition engine, such as a petrol engine. It produces pulses of high voltage for the spark plugs.The use of ignition magnetos is now confined mainly to engines where there is no other available electrical supply, for example in lawnmowers and chainsaws. It is also widely used in aviation piston engines even though an electrical supply is usually available. This is because a magneto ignition system is more reliable than a battery-coil system. People discussing magnetos and coils used in early internal-combustion engines generally used the term "tension" instead of the more modern term "voltage."

Firing the gap of a spark plug, particularly in the combustion chamber of a high-compression engine, requires a greater voltage (or higher tension) than can be achieved by a simple magneto. The high-tension magneto combines an alternating current magneto generator and a transformer. A high current at low voltage is generated by the magneto, then transformed to a high voltage (even though this is now a far smaller current) by the transformer.

Magneto ignition was introduced on the 1899 Daimler Phönix. This was followed by Benz, Mors, Turcat-Mery, and Nesseldorf, and soon was used on most cars up until about 1918 in both low voltage (voltage for secondary coils to fire the spark plugs) and high voltage magnetos (to fire the spark plug directly, similar to coil ignitions, introduced by Bosch in 1903). 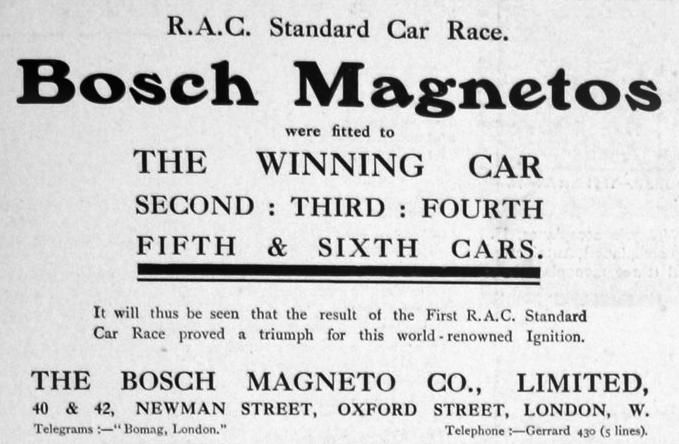 In the type known as a shuttle magneto, the engine rotates a coil of wire between the poles of a magnet. In the inductor magneto, the magnet is rotated and the coil remains stationary.

In a modern installation, the magneto only has a single low tension winding which is connected to an external ignition coil which not only has a low tension winding, but also a secondary winding of many thousands of turns to deliver the high voltage required for the spark plug(s). Such a system is known as an "energy transfer" ignition system. Initially this was done because it was easier to provide good insulation for the secondary winding of an external coil than it was in a coil buried in the construction of the magneto (early magnetos had the coil assembly externally to the rotating parts to make them easier to insulate—at the expense of efficiency). In more modern times, insulation materials have improved to the point where constructing self-contained magnetos is relatively easy, but energy transfer systems are still used where the ultimate in reliability is required such as in aviation engines.

Because the magneto has low voltage output at low speed, starting an engine is more difficult. Therefore some magnetos have an impulse coupling, a springlike mechanical linkage between the engine and magneto drive shaft which "winds up" and "lets go" at the proper moment for spinning the magneto shaft. The impulse coupling uses a spring, a hub cam with flyweights, and a shell. The hub of the magneto rotates while the drive shaft is held stationary, and the spring tension builds up. When the magneto is supposed to fire, the flyweights are released by the action of the body contacting the trigger ramp. This allows the spring to unwind giving the rotating magnet a rapid rotation and letting the magneto spin at such a speed to produce a spark.

Some aviation engines as well as some early luxury cars have had dual-plugged systems with one set of plugs fired by a magneto, and the other set wired to a coil, dynamo, and battery circuit. This was done to improve engine efficiency without sacrificing reliability. Magnetos were once considered a more reliable ignition source, but have the disadvantage of having fixed timing. This means that the timing must be a compromise setting, which is neither the best for low RPM nor the best for high RPM. On the other hand, battery ignition systems have almost always had a timing advance system which can set the timing to the best setting for the speed the engine is turning, improving power output and fuel efficiency. As the reliability of battery ignition systems improved, the magneto fell out of favor for general automotive use, but may still be found in sport or racing engines.