How a Car Ignition System Works 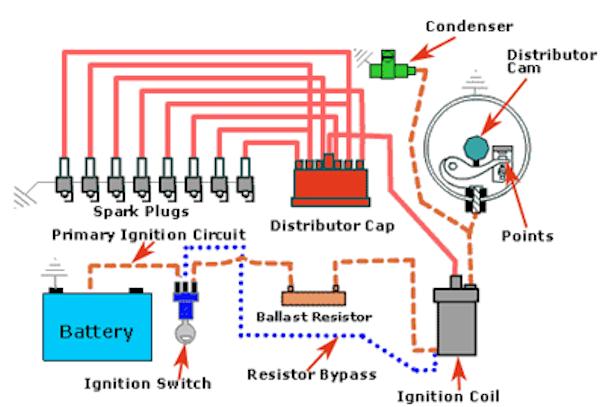 The ignition system in your car ignites the fuel inside the engine's combustion  chamber at the optimal time in the piston stroke to produce the most power while  emitting the least amount ofemissions as possible.  There are many configurations of ignition systems but all operate on the same principle,  create a low energy field and collapse it onto a high energy coil and that transfers  the electrical energy into the secondary ignition system, i.e. coil wire, distributor  cap and rotor (if equipped) plug wires and finally the spark plug.

This system is triggered by the primary ignition system, this system varies depending  on manufacturer but all operate on the same principle, use some kind of low voltage  trigger system i.e. crankshaft  position sensor (CKP), camshaft position sensor (CAS). This low voltage system  (1.5 to 3.0 volts) is amplified to 12 volts by using an ignition module (amplifier)  and then transferred to the primary side of the ignition coil. Thecomputer PCM (Powertrain  control module) controls the engine ignition timing by advancing  and retarding the primary trigger signal. In old cars a points, condenser and a  vacuum advance unit performed this job.

This ignition coil is a pulse-type it consists, in part, of two coils of wire.  These wires are wrapped around two iron cores. Because this is a step-up transformer,  the secondary coil has far more turns of wire than the primary coil. The secondary  coil has several thousand turns of thin wire, while the primary coil has just a  few hundred raps. This allows 40,000 volts or more of voltage to be generated frombattery voltage. This electrical  signal is generated by the crankshaft position sensor (CKP), camshaft position sensor  (CAS). The PCM calculates spark timing by using the computer system.

Some ignition systems have a coil for each spark plug. This is called Direct  Ignition (DI) system; there are no plug wires in this system just individually controlled  ignition coils. The amount of coils or spark plugs depends on the number of cylinders  the engine is designed with.

The distributor cap and rotor are two essential pieces that distribute electrical  current to the spark plugs. The distributor cap connects to the spark plugs directly  using a spark plug wire. The number of plug wires connected depends on the amount  of spark plugs that are in the engine. For example, an eight cylinder engine will  have eight plug wires. The rotor is designed to spin inside of the distributor cap,  just missing the terminals inside the cap. A worn or damaged rotor can cause your vehicle run rough, or even stall completely. The rotor is rotating at the same  speed as the camshaft which also happens to be 1/2 the speed of the crankshaft.

How to Test an Ignition System