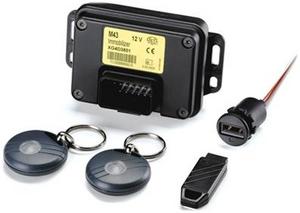 An immobiliser or immobilizer is an electronic security device fitted to an automobile that prevents the engine from running unless the correct key (or other token) is present. This prevents the car from being "hot wired" after entry has been achieved.

Immobilisers have been mandatory in all new cars sold in Germany since 1 January 1998, in the United Kingdom since 1 October 1998, in Finland since 1998, in Australia since 2001 and in Canada since 2007. Early models used a static code in the ignition key (or key fob) which was recognised by an RFID loop around the lock barrel and checked against the vehicle's engine control unit (ECU) for a match. If the code is unrecognised, the ECU will not allow fuel to flow and ignition to take place. Later models use rolling codes or advanced cryptography to defeat copying of the code from the key or ECU.

The microcircuit inside the key is activated by a small electromagnetic field which induces current to flow inside the key body, which in turn broadcasts a unique binary code which is read by the automobile's ECU. When the ECU determines that the coded key is both current and valid, the ECU activates the fuel-injection sequence.

In some vehicles, attempts to use an unauthorized or "non-sequenced" key cause the vehicle to activate a timed no-start condition and in some highly advanced systems, even use satellite or mobile phone communication to alert a security firm that an unauthorized attempt was made to code a key.

Coincidentally, this information is often recorded in modern automobile ECUs, which may record many other variables including speed, temperature, driver weight, geographic location, throttle position and yaw angle. This information can be used during insurance investigations, warranty claims or technical troubleshooting.

Add-on immobilisers are available for older cars or vehicles without factory immobilisers. The insurance approval for a self-arming immobiliser is known as "Thatcham 2" after the Motor Insurance Repair Research Centre in Thatcham, England. Approved immobilisers must intercept at least two circuits; typically the low-voltage ignition circuit and the fuel pump circuit. Some may also intercept the low-current starter motor circuit from the key switch to the relay.

Statistics in Australia show that 3 out of 4 vehicle thefts are older cars stolen for joyriding, transport or to commit another crime. Immobilisers are fitted to around 45% of all cars in Australia, but account for only 7% of those cars that are stolen. In many instances where a vehicle fitted with an immobiliser has been stolen, the thief had access to the original key. Only around 1 in 4 stolen vehicles are stolen by professional thieves. The majority of vehicles are stolen by opportunistic thieves relying on finding older vehicles that have ineffective security or none at all.