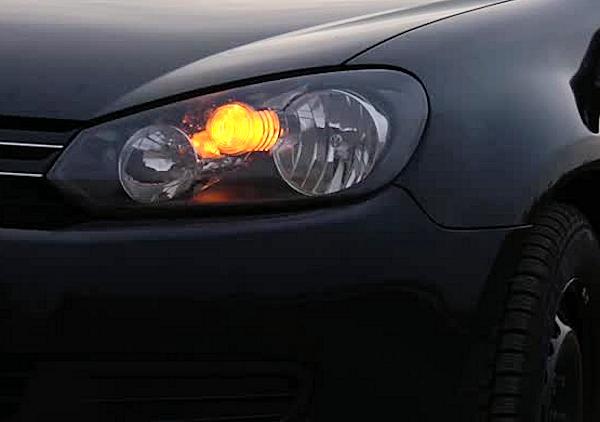 Turn signals — formally called "directional indicators" or "directional signals", and informally known as "directionals", "blinkers", "indicators" or "flashers" — are blinking lamps mounted near the left and right front and rear corners of a vehicle, and sometimes on the sides, activated by the driver on one side of the vehicle at a time to advertise intent to turn or change lanes toward that side.

Electric turn signal lights were devised as early as 1907.The modern turn signal was patented in 1938 and was later offered by most major automobile manufacturers Today, turn signals are required on all new vehicles that are driven on public roadways in most countries. Alternative systems of hand signals were used earlier, and they are still common for bicycles. Hand signals are also sometimes used when regular vehicle lights are malfunctioning or for older vehicles that are not so equipped.

Some cars from the 1920s to 1950s used retractable semaphores called trafficators rather than flashing lights. They were commonly mounted high up behind the front doors and swung out horizontally. However, they were fragile and could be easily broken off and also had a tendency to stick in the closed position.

As with all vehicle lighting and signalling devices, turn signal lights must comply with technical standards that stipulate minimum and maximum permissible intensity levels, minimum horizontal and vertical angles of visibility, and minimum illuminated surface area to ensure that they are visible at all relevant angles, do not dazzle those who view them, and are suitably conspicuous in conditions ranging from full darkness to full direct sunlight.

In most countries, cars must be equipped with side-mounted turn signal repeaters to make the turn indication visible laterally rather than just to the front and rear of the vehicle. These are permitted, but not required in the US. As an alternative in both the United States and Canada, the front amber side marker lights may be wired to flash with the turn signals, but this also is not mandatory. In recent years, many automakers have been incorporating side turn signal devices into the sideview mirror housings, rather than mounting them on the vehicle's fenders. One of the first vehicles so equipped was the Mercedes-Benz R170. There is evidence to suggest these mirror-mounted turn signals may be more effective than fender-mounted items.

Turn signals are required to blink on and off, or "flash", at a steady rate of between 60 and 120 blinks per minute.International UN Regulations require that all turn signals flash in simultaneous phase; US regulations permit side marker lights wired for side turn signal functionality to flash in opposite-phase. Worldwide regulations stipulate an audiovisual tell-tale indicator when the turn signals are activated.This usually takes the form of one or two green indicator lights on the vehicle's instrument cluster, and a cyclical "tick-tock" noise generated electromechanically or electronically. It is also required that audio and visual warning be provided to the vehicle operator in the event of a turn signal's failure to light. This warning is usually provided by a much faster- or slower-than-normal flash rate, visible on the dashboard indicator, and audible via the faster or slower tick-tock sound.

Turn signals are in almost every case activated by a horizontal lever (or "stalk") protruding from the side of the steering column, though on some vehicles it protrudes from the dashboard. The outboard end of the stalk is pushed clockwise to activate the right turn signals, or anticlockwise for the left turn signals. In most cases, by industry convention, the signal stalk is on the outboard side of the column: the left side in a left-hand drive car, or the right side in a right-hand drive car. The Northern American regulations on vehicle controls—Canada and U.S. FMVSS 101—do not specify a mandatory location for the turn signal control, requiring only that it be visible and operable by the belted-in driver, and that it be labelled with a specific symbol if it is not located on the left side of the steering column. The international UN Regulations do not include analogous specifications

Virtually all vehicles (except many motorcycles and commercial semi-tractors) have a turn indicator self-cancelling feature that returns the lever to the neutral (no signal) position as the steering wheel approaches the straight-ahead position after a turn has been made. Beginning in the late 1960s, indicating for a lane change was facilitated by the addition of a spring-loaded momentary signal-on position just shy of the left and right detents.The signal operates for however long the driver holds the lever partway towards the left or right turn signal detent. Some recent vehicles have an automatic lane-change indication feature; tapping the lever partway towards the left or right signal position and immediately releasing it causes the applicable turn indicators to flash three to five times.

Some transit buses, such as those in New York, have, since at least the 1950s, had turn signals activated by floor-mounted momentary-contact footswitches on the floor near the driver's left foot (on left-hand drive buses). The foot-activated signals allow bus drivers to keep both hands on the steering wheel while watching the road and scanning for passengers as they approach a bus stop. New York City Transit bus drivers, among others, are trained to step continuously on the right directional switch while servicing a bus stop, to signal other road users they are intentionally dwelling at the stop, allowing following buses to skip that stop.This method of signalling requires no special arrangements for self-cancellation or passing.

Sequential turn signals are a feature on some cars wherein the turn signal function is provided by multiple lit elements that illuminate sequentially rather than simultaneously: the innermost lamp lights and remains illuminated, the next outermost lamp lights and remains illuminated, followed by the next outermost lamp and so on until the outermost lamp lights briefly, at which point all lamps extinguish together and, after a short pause, the cycle begins again. The visual effect is one of outward motion in the direction of the intended turn or lane change. Sequential turn signals have been factory-installed only on cars with red combination stop/turn lamps. They were factory fitted to 1965- through 1971-model Ford Thunderbirds, to 1967–1973 Mercury Cougars, to Shelby Mustangs between 1967 and 1970, to 1969 Imperials, to the Japanese-market 1971-1972 Nissan Cedric, and to Ford Mustangs since 2010. The system is costly and complex relative to standard turn signals.

Two different systems were employed. The earlier, fitted to the 1965 through 1968 Ford-built cars and the 1971-1972 Nissan Cedric, employed an electric motor driving, through reduction gearing, a set of three slow-turning cams. These cams would actuate switches to turn on the lights in sequence. This system was complicated and prone to failure, and the units no longer function in many surviving cars. Later Ford cars and the 1969 Imperial used a transistorised control module with no moving parts.

FMVSS 108 has been officially interpreted as requiring all light sources in an active turn signal to illuminate simultaneously.However, the 2010 and newer Ford Mustangs are equipped with sequential turn signals.

There is some evidence that turn signals with colourless clear lenses and amber bulbs may be less conspicuous in bright sunlight than those with amber lenses and colourless bulbs.

The amber bulbs commonly used in turn signals with colourless lenses are no longer made with cadmium glass, since cadmium was banned because of its toxicity by various regulations worldwide, including the European RoHS directive.Amber glass made without cadmium is relatively costly, so most amber bulbs are now made with clear glass dipped in an amber coating. Some of these coatings are not as durable as the bulbs themselves; with prolonged heat-cool cycles, the coating may flake off the bulb glass, or its colour may fade. This causes the turn signal to emit white light rather than the required amber light. The international regulation on motor vehicle bulbs requires manufacturers to test bulbs for colour endurance. However, no test protocol or colour durability requirement is specified. Discussion is ongoing within the Groupe des Rapporteurs d'Éclairage, the UNECE working group on vehicular lighting regulation, to develop and implement a colour durability standard. Rather than using an amber bulb, some signal lamps contain an inner amber plastic enclosure between a colourless bulb and the colourless outer lens.