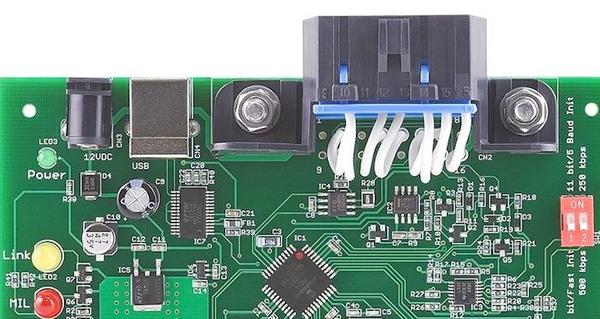 On-board diagnostics, or OBD, is an automotive term referring to a vehicle's self-diagnostic and reporting capability. OBD systems give the vehicle owner or a repair technician access to state of health information for various vehicle sub-systems. The amount of diagnostic information available via OBD has varied widely since the introduction in the early 1980s of on-board vehicle computers, which made OBD possible. Early instances of OBD would simply illuminate a malfunction indicator light, or MIL, if a problem was detected—but would not provide any information as to the nature of the problem. Modern OBD implementations use a standardized digital communications port to provide real-time data in addition to a standardized series of diagnostic trouble codes, or DTCs, which allow one to rapidly identify and remedy malfunctions within the vehicle.

GM's ALDL (Assembly Line Diagnostic Link) is sometimes referred as a predecessor to, or a manufacturer's proprietary version of, an OBD-I diagnostic. This interface was made in different varieties and changed with power train control modules (aka PCM, ECM, ECU). Different versions had slight differences in pin-outs and baud rates. Earlier versions used a 160 baud rate, while later versions went up to 8192 baud and used bi-directional communications to the PCM.

The regulatory intent of OBD-I was to encourage auto manufacturers to design reliable emission control systems that remain effective for the vehicle's "useful life". The hope was that by forcing annual emissions testing for California, and denying registration to vehicles that did not pass, drivers would tend to purchase vehicles that would more reliably pass the test. OBD-I was largely unsuccessful, as the means of reporting emissions-specific diagnostic information was not standardized. Technical difficulties with obtaining standardized and reliable emissions information from all vehicles led to an inability to implement the annual testing program effectively.

OBD 1.5 refers to a partial implementation of OBD-II which General Motors used on some vehicles in 1994, 1995, & 1996. (GM did not use the term OBD 1.5 in the documentation for these vehicles — they simply have an OBD and an OBD-II section in the service manual.)

The pinout for the ALDL connection on these cars is as follows:

For ALDL connections, pin 9 is the data stream, pins 4 and 5 are ground, and pin 16 is battery voltage.

An OBD 1.5 compatible scan tool is required to read codes generated by OBD 1.5.

Additional vehicle-specific diagnostic and control circuits are also available on this connector. For instance, on the Corvette there are interfaces for the Class 2 serial data stream from the PCM, the CCM diagnostic terminal, the radio data stream, the airbag system, the selective ride control system, the low tire pressure warning system, and the passive keyless entry system. 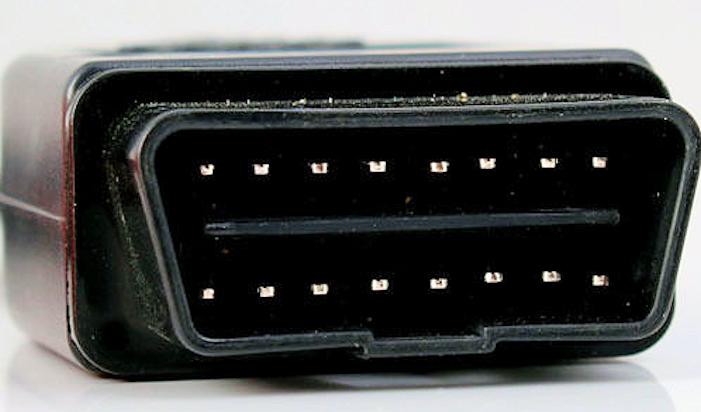 OBD-II is an improvement over OBD-I in both capability and standardization. The OBD-II standard specifies the type of diagnostic connector and its pinout, the electrical signalling protocols available, and the messaging format. It also provides a candidate list of vehicle parameters to monitor along with how to encode the data for each. There is a pin in the connector that provides power for the scan tool from the vehicle battery, which eliminates the need to connect a scan tool to a power source separately. However, some technicians might still connect the scan tool to an auxiliary power source to protect data in the unusual event that a vehicle experiences a loss of electrical power due to a malfunction. Finally, the OBD-II standard provides an extensible list of DTCs. As a result of this standardization, a single device can query the on-board computer(s) in any vehicle. This OBD-II came in two models OBD-IIA and OBD-IIB. OBD-II standardization was prompted by emissions requirements, and though only emission-related codes and data are required to be transmitted through it, most manufacturers have made the OBD-II Data Link Connector the only one in the vehicle through which all systems are diagnosed and programmed. OBD-II Diagnostic Trouble Codes are 4-digit, preceded by a letter: P for engine and transmission (powertrain), B for body, C for chassis, and U for network.

The OBD-II specification provides for a standardized hardware interface—the female 16-pin (2x8) J1962 connector. Unlike the OBD-I connector, which was sometimes found under the hood of the vehicle, the OBD-II connector is required to be within 2 feet (0.61 m) of the steering wheel (unless an exemption is applied for by the manufacturer, in which case it is still somewhere within reach of the driver). SAE J1962 defines the pinout of the connector as:

The assignment of unspecified pins is left to the vehicle manufacturer's discretion.

The EOBD (European On Board Diagnostics) regulations are the European equivalent of OBD-II, and apply to all passenger cars of category M1 (with no more than 8 passenger seats and a Gross Vehicle Weight rating of 2500 kg or less) first registered within EU member states since January 1, 2001 for petrol (gasoline) engined cars and since January 1, 2004 for diesel engined cars.

The technical implementation of EOBD is essentially the same as OBD-II, with the same SAE J1962 diagnostic link connector and signal protocols being used.

With Euro V and Euro VI emission standards, EOBD emission thresholds will be lower than previous Euro III and IV.

Each of the EOBD fault codes consists of five characters. A letter followed by four numbers. The letter refers to the system being interrogated e.g. Pxxxx would refer to the powertrain system. The next character would be a 0 if complies to the EOBD standard. So it should look like P0xxx.

The next character would refer to the sub system.

The following two characters would refer to the individual fault within each subsystem.

The term "EOBD2" is marketing speak used by some vehicle manufacturers to refer to manufacturer-specific features that are not actually part of the OBD or EOBD standard. In this case "E" stands for Enhanced.

JOBD is a version of OBD-II for vehicles sold in Japan.

There are five signaling protocols that are permitted with the OBD-II interface. Most vehicles implement only one of the protocols. It is often possible to deduce the protocol used based on which pins are present on the J1962 connector:

All OBD-II pinouts use the same connector, but different pins are used with the exception of pin 4 (battery ground) and pin 16 (battery positive).

OBD-II provides access to data from the engine control unit (ECU) and offers a valuable source of information when troubleshooting problems inside a vehicle. The SAE J1979 standard defines a method for requesting various diagnostic data and a list of standard parameters that might be available from the ECU. The various parameters that are available are addressed by "parameter identification numbers" or PIDs which are defined in J1979. For a list of basic PIDs, their definitions, and the formula to convert raw OBD-II output to meaningful diagnostic units, see OBD-II PIDs. Manufacturers are not required to implement all PIDs listed in J1979 and they are allowed to include proprietary PIDs that are not listed. The PID request and data retrieval system gives access to real time performance data as well as flagged DTCs. For a list of generic OBD-II DTCs suggested by the SAE, see Table of OBD-II Codes. Individual manufacturers often enhance the OBD-II code set with additional proprietary DTCs.

Here is a basic introduction to the OBD communication protocol according to ISO 15031:

Mode $01 is used to identify what powertrain information is available to the scan tool.

There are ten numbers available for diagnostics:

Mode $06 is a Request for On-Board Monitoring Test Results for Continuously and Non-Continuously Monitored System. There are typically a minimum value, a maximum value, and a current value for each non-continuous monitor.

Mode $08 could enable the off-board test device to control the operation of an on-board system, test, or component.

Mode $09 is used to retrieve vehicle information. Among others, the following information is available: 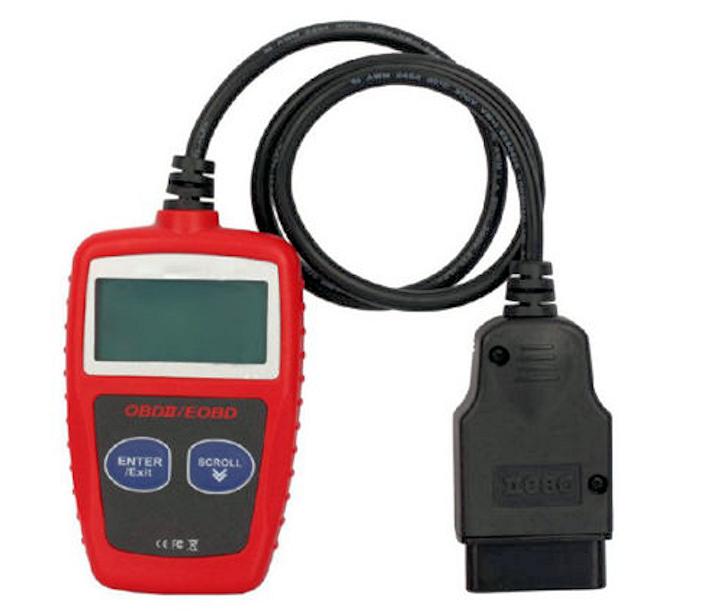 A range of rugged hand-held scan tools is available.

Mobile Device Based Tools and Analysis

A PC-based OBD analysis tool that converts the OBD-II signals to serial data (USB or serial port) standard to PCs or Macs. The software then decodes the received data to a visual display. Many popular interfaces are based on the ELM or STN1110 OBD Interpreter ICs, both of which read all five generic OBD-II protocols. Some adapters now use the J2534 API allowing them to access OBD-II Protocols for both cars and trucks.

In addition to the functions of a hand-held scan tool, the PC-based tools generally offer:

The extent that a PC tool may access manufacturer or vehicle-specific ECU diagnostics varies between software products as it does between hand-held scanners.

Data loggers are designed to capture vehicle data while the vehicle is in normal operation, for later analysis.

Analysis of vehicle black box data may be performed on a periodic basis, automatically transmitted wirelessly to a third party or retrieved for forensic analysis after an event such as an accident, traffic infringement or mechanical fault.

In the United States, many states now use OBD-II testing instead of tailpipe testing in OBD-II compliant vehicles (1996 and newer). Since OBD-II stores trouble codes for emissions equipment, the testing computer can query the vehicle's onboard computer and verify there are no emission related trouble codes and that the vehicle is in compliance with emission standards for the model year it was manufactured.

In the Netherlands, 2006 and later vehicles get a yearly EOBD emission check.

Driver's supplementary vehicle instrumentation is instrumentation installed in a vehicle in addition to that provided by the vehicle manufacturer and intended for display to the driver during normal operation. This is opposed to scanners used primarily for active fault diagnosis, tuning, or hidden data logging.

Instrumentation may take the form of dedicated trip computers,carputer or interfaces to PDAs, smartphones, or a Garmin navigation unit.

As a carputer is essentially a PC, the same software could be loaded as for PC-based scan tools and vice-versa, so the distinction is only in the reason for use of the software.

These enthusiast systems may also include some functionality similar to the other scan tools.

OBD II is no longer only used by professionals and hobbyists to repair vehicles. OBD II information is commonly used by vehicle telematics devices that perform fleet tracking, monitor fuel efficiency, prevent unsafe driving, as well as for remote diagnostics and by Pay-As-You-Drive insurance. Although originally not intended for the above purposes, commonly supported OBD II data such as Vehicle Speed, RPM, and Fuel Level allow GPS based fleet tracking devices to monitor vehicle idling times, speeding, and over-revving. By monitoring OBD II DTCs a company can know immediately if one of its vehicles has an engine problem and by interpreting the code the nature of the problem. OBD II is also monitored to block mobile phones when driving and to record trip data for insurance purposes.

Researchers at the University of Washington and University of California examined the security around OBD, and found that they were able to gain control over many vehicle components via the interface. Furthermore, they were able to upload new firmware into the engine control units. Their conclusion is that vehicle embedded systems are not designed with security in mind.

There have been reports of thieves using specialist OBD reprogramming devices to enable them to steal cars without the use of a key. The primary causes of this vulnerability lie in the tendency for vehicle manufacturers to extend the bus for purposes other than those for which it was designed, and the lack of authentication and authorization in the OBD specifications, which instead rely largely on security through obscurity.