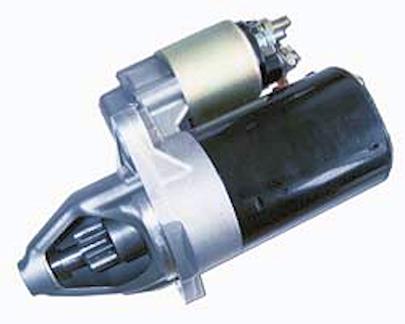 An enginestarter is designed to utilize  a 12 volt, high amperage electrical  system made to turn an engine over for starting purposes via aflywheel. Basically a starter  is an electric motor with a small pinion gear and bendix assembly. This starter  bendix drive is designed to extend and mesh with the flywheel teeth when theignition key is turned to the  "crank" position and then retract when the ignition key is released after the engine  has started. A starter motor is constructed with a main outer housing that contains  the armature magnets, the armature contains the starter windings, a brush set that  is used to contact the armature to transfer the electrical energy.

Most starter motors are mounted underneath the car near the flywheel on either  the left or right side. The flywheel is located between the engine and transmission.  Some models have located the starter under the intake manifold, which makes replacement  difficult. When the ignition key is turned to the "engine  crank" position a 12 volt low amperage electrical signal is sent to the anti-theft  system which in turn can monitor the gear selection or clutch safety switch position.  Only then will the signal continue to the starter solenoid that activates the high  amperage side of the electrical system to engage the starter motor.

Once the starter motor has been engaged the starter bendix senses the armature  momentum and is forced to extend into the flywheel. Once the engine has started  and the ignition key released the bendix loses momentum and the bendix is forced  to return to idle position. If the flywheel is worn it can cause agrinding noise when the starter bendix/pinion  gear is engaged. The objective of the starter motor is to rotate the engine between  85 and 150 rpm's necessary for engine ignition process. A starter will typical last between 60,000 and 100,000  miles and is a normal replacement item.

The starter will not operate properly without the correct voltage needed. To  test the electrical system voltage use avoltage meter (voltmeter). Attach  the voltmeter leads to the positive and negative terminals of the battery. To check  a battery surface voltage, remove the positive terminal protective cover and connect  the +positive side meter lead (red) to the positive side battery terminal then connect  the - negative (black) side meter lead to the negative battery terminal. With the  vehicle not running and sitting over night the battery voltage should be between  12.4 and 12.6 volts.

To test the system without a volt meter activate theheadlights, if they illuminate  brightly the electrical system probably has sufficient voltage. If the headlights  are dim or not working the battery charge is either low or the battery has failed  and needs replacing. 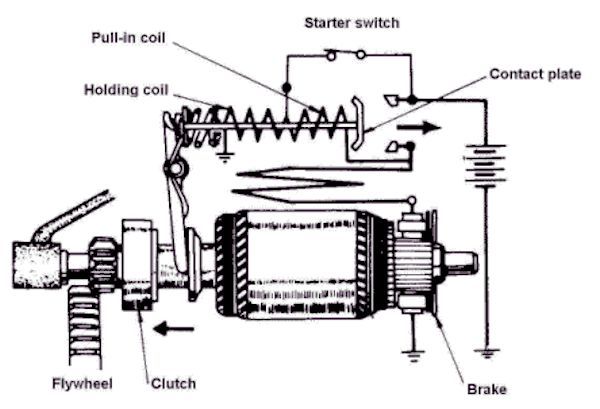