Red steady-burning rear lights, brighter than the rear position lamps, are activated when the driver applies the vehicle's brakes. These are called "stop lamps" in some countries and "brake lights" in others. They are required to be fitted in multiples of two, symmetrically at the left and right edges of the rear of every vehicle. Outside Northern America, the range of acceptable intensity for a stop lamp is 60 to 185 candela. In Northern America, the acceptable range for a single-compartment stop lamp is 80 to 300 candela.

The CHMSL is intended to provide a deceleration warning to following drivers whose view of the vehicle's left and right stop lamps is blocked by interceding vehicles. It also helps to disambiguate brake vs. turn signal messages in Northern America, where red rear turn signals identical in appearance to stop lamps are permitted, and also can provide a redundant stop light signal in the event of a stop lamp malfunction.

The CHMSL is generally required to illuminate steadily and not permitted to flash, though U.S. regulators granted Mercedes-Benz a temporary, limited exemption to the steady-light requirement so as to evaluate whether a flashing CHMSL provides an emergency stop signal that effectively reduces the likelihood of a crash.

On passenger cars, the CHMSL may be placed above the back glass, affixed to the vehicle's interior just inside the back glass, or it may be integrated into the vehicle's deck lid or into a spoiler. Other specialised fitments are sometimes seen; the Jeep Wrangler and Land Rover Freelander have the CHMSL on a stalk fixed to the spare wheel carrier. Trucks, vans and commercial vehicles sometimes have the CHMSL mounted to the trailing edge of the vehicle's roof. The CHMSL is required by regulations worldwide to be centred laterally on the vehicle, though UN Regulation 48 permits lateral offset of up to 15 cm if the vehicle's lateral centre is not coincident with a fixed body panel, but instead separates movable components such as doors The Renault Master van, for example, uses a laterally offset CHMSL for this reason. The height of the CHMSL is also regulated, in absolute terms and with respect to the mounting height of the vehicle's conventional left and right stop lamps.Depending on the left and right lamps' height, the lower edge of the CHMSL may be just above the left and right lamps' upper edge.

The 1952 Volkswagen Bus was equipped with only one stop lamp, mounted centrally and higher than the left and right rear lamps which did not produce a stop lamp function.The 1968 - 1971 Ford Thunderbird could be ordered with optional supplemental high-mounted stop and turn signal lights integrated into the left and right interior trim surrounding the backglass. The Oldsmobile Toronado from 1971 to 1978, and the Buick Riviera from 1974 to 1976 had similar dual high-mounted supplemental stop/turn lights as standard equipment; these were located on the outside of the vehicle below the bottom of the backglass. This type of configuration was not widely adopted at the time. Auto and lamp manufacturers in Germany experimented with dual high-mount supplemental stop lamps in the early 1980s, but this effort, too, failed to gain wide popular or regulatory support.

Effective with the 1986 model year, the United States National Highway Traffic Safety Administration and Transport Canada mandated that all new passenger cars come equipped with a CHMSL. The requirement was extended to light trucks and vans for the 1994 model year. Early studies involving taxicabs and other fleet vehicles found that a third, high-level stop lamp reduced rear-end collisions by about 50%. Once the novelty effect wore off as most vehicles on the road came to be equipped with the central third stop lamp, the crash-avoidance benefit declined. However, it did not decline to zero, and a CHMSL is so inexpensive to incorporate into a vehicle that it is a cost-effective collision avoidance feature even at the long-term enduring crash-reduction benefit of 4.3%. 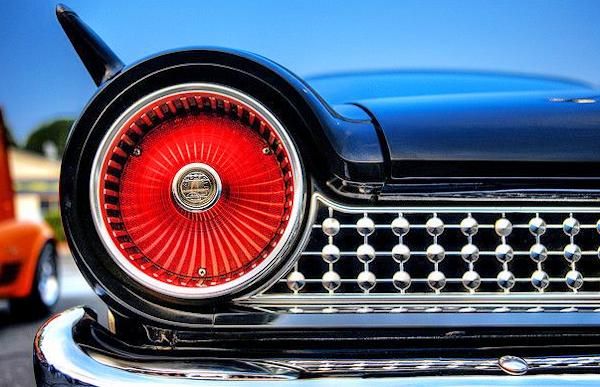