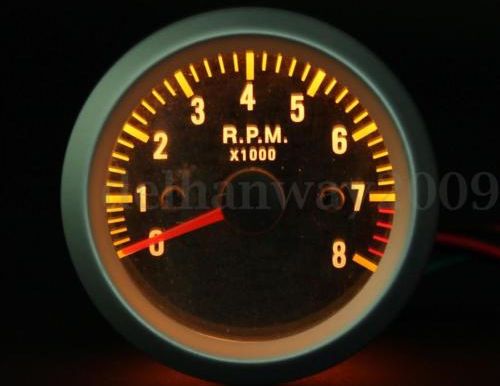 A tachometer (revolution-counter, Tach, rev-counter, RPM gauge) is an instrument measuring the rotation speed of a shaft or disk, as in a motor or other machine. The device usually displays the revolutions per minute (RPM) on a calibrated analogue dial, but digital displays are increasingly common. The word comes from Greek Ταχος, tachos, "speed", and metron, "measure".

The first mechanical tachometers were based on measuring the centrifugal force, similar to the operation of a centrifugal governor. The inventor is assumed to be the German engineer Dietrich Uhlhorn; he used it for measuring the speed of machines in 1817. Since 1840, it has been used to measure the speed of locomotives.

In automobiles, trucks, tractors and aircraft

Tachometers or rev counters on cars, aircraft, and other vehicles show the rate of rotation of the engine's crankshaft, and typically have markings indicating a safe range of rotation speeds. This can assist the driver in selecting appropriate throttle and gear settings for the driving conditions. Prolonged use at high speeds may cause inadequate lubrication, overheating (exceeding capability of the cooling system), exceeding speed capability of sub-parts of the engine (for example spring retracted valves) thus causing excessive wear or permanent damage or failure of engines. This is more applicable to manual transmissions than to automatics. On analogue tachometers, speeds above maximum safe operating speed are typically indicated by an area of the gauge marked in red, giving rise to the expression of "redlining" an engine — revving the engine up to the maximum safe limit. The red zone is superfluous on most modern cars, since their engines typically have a rev limiter which electronically limits engine speed to prevent damage. Diesel engines with traditional mechanical injector systems have an integral governor which prevents over-speeding the engine, so the tachometers in vehicles and machinery fitted with such engines sometimes lack a redline.

In vehicles such as tractors and trucks, the tachometer often has other markings, usually a green arc showing the speed range in which the engine produces maximum torque, which is of prime interest to operators of such vehicles. Tractors fitted with a power take off (PTO) system have tachometers showing the engine speed needed to rotate the PTO at the standardised speed required by most PTO-driven implements. In many countries, tractors are required to have a speedometer for use on a road. To save fitting a second dial, the vehicle's tachometer is often marked with a second scale in units of speed. This scale is only accurate in a certain gear, but since many tractors only have one gear that is practical for use on-road, this is sufficient. Tractors with multiple 'road gears' often have tachometers with more than one speed scale. Aircraft tachometers have a green arc showing the engine's designed cruising speed range.

In older vehicles, the tachometer is driven by the RMS voltage waves from the low tension (LT) side of the ignition coil, while on others (and nearly all diesel engines, which have no ignition system) engine speed is determined by the frequency from the alternator tachometer output. This is from a special connection called an "AC tap" which is a connection to one of the stator's coil output, before the rectifier. Tachometers driven by a rotating cable from a drive unit fitted to the engine (usually on the camshaft) exist - usually on simple diesel-engined machinery with basic or no electrical systems. On recent EMS found on modern vehicles, the signal for the tachometer is usually generated from an ECU which derives the information from either the crankshaft or camshaft speed sensor. 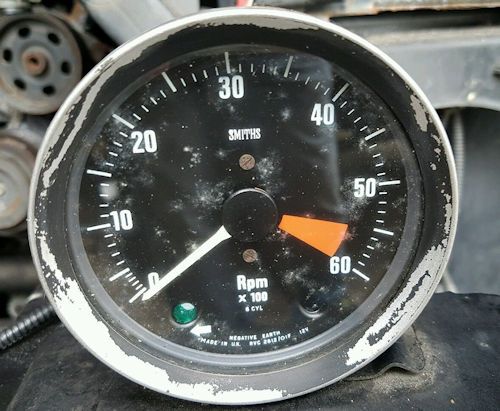 Tachometers are used to estimate traffic speed and volume (flow). A vehicle is equipped with the sensor and conducts "tach runs" which record the traffic data. These data are a substitute or complement to loop detector data. To get statistically significant results requires a high number of runs, and bias is introduced by the time of day, day of week, and the season. However, because of the expense, spacing (a lower density of loop detectors diminishes data accuracy), and relatively low reliability of loop detectors (often 30% or more are out of service at any given time), tach runs remain a common practice.