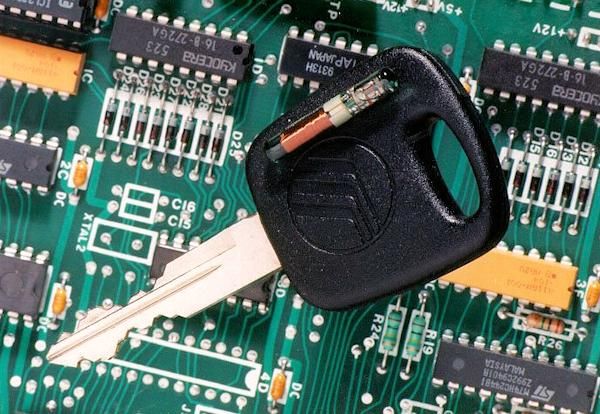 The majority of keys to cars built after 1995 contain transponder chips. The purpose of a transponder chip is to disarm a vehicle immobiliser when the car key is used to start the engine.

When the car key is turned in the ignition, the engine control unit (ECU) on the car sends an electronic message to the key, and it will only allow the car to start provided it receives the correct message back. So, even for a simple car key without any buttons, the key must be cut correctly to turn the locks, and also programmed correctly to disarm the immobiliser. Car keys with chips can be programmed using special equipment.

A transponder is short for: transmitter + responder.

The word came into use around 1944. In basic terms a transponder is a miniaturized electronic chip that has what is called non-volatile memory. Non-volatile memory is the type of memory that does not need constant energy for retention. Along with that electronic chip is a set of windings; very fine wire coiled around a tube. These windings look similar to the windings you would find in an electric motor. There are two basic types of transponders. The first are the electric coupled transponder systems. Electric coupled transponder systems are not limited to small areas for transmission but can transmit messages or signals for different ranges of distance including several inches to miles, as used in satellites and airplanes. These systems require large amounts of constant electricity to operate.

The process of key identification is similar in most automotive transponder systems. Once a key is inserted into the ignition lock and turned to one of the ‘on’ or ‘run’ positions, the induction coil that is mounted around the ignition lock sends out an electromagnet field of energy. The windings in the transponder chip absorb that energy and power the electronic chip to emit a signal. The signal is usually an alphanumeric sequence which is considered the identification code. The induction coil reads the signal and sends it to some type of computer device to recognize the signal. If the signal is recognized as being already in the computer’s memory the signal is accepted and other electronic components in the vehicle are set into motion to allow the starting of the vehicle or the continuation of the engine running.

Immobiliser systems based on Transponders may not be as safe as they are considered to be. Some immobiliser systems tend to remember last key code for so long that they may even accept a non-transponder key even after a few minutes of taking out the original key from ignition.

Remote keyless entry fobs emit a radio frequency with a designated, distinct digital identity code. In as much as "programming" fobs is a proprietary technical process, it is typically performed by the automobile manufacturer. (In point of fact it is a computer in the car which is programmed in the process, not the fob itself.) In general, the procedure is to put the car computer in 'programming mode'. This usually entails engaging the power in the car several times while holding a button or lever. It may also include opening doors, or removing fuses. The procedure varies amongst various makes, models, and years. Once in 'programming mode' one or more of the fob buttons is depressed to send the digital identity code to the car's onboard computer. The computer saves the code and the car is then taken out of 'programming mode'.

As remote keyless system fobs have become more prevalent in the automobile industry a secondary market of unprogrammed devices have sprung up. Some web sites sell steps to program fobs for individual models of cars as well as accessory kits to remotely activate other car devices. 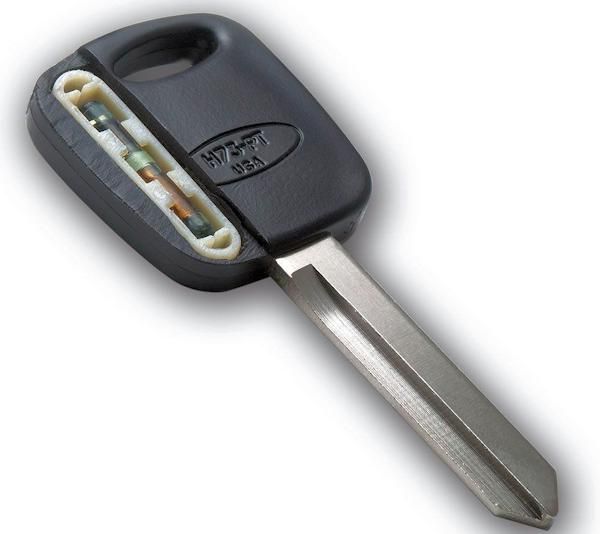