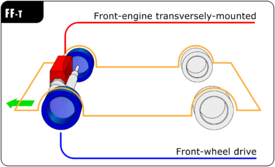 Front-wheel-drive layouts are those in which the front wheels of the vehicle are driven. The most popular layout used in cars today is the front-engine, front-wheel drive, with the engine in front of the front axle, driving the front wheels. This layout is typically chosen for its compact packaging; since the engine and driven wheels are on the same side of the vehicle, there is no need for a central tunnel through the passenger compartment to accommodate a prop-shaft between the engine and the driven wheels.

As the steered wheels are also the driven wheels, FF (front-engine, front-wheel-drive layout) cars are generally considered superior to FR (front-engine, rear-wheel-drive layout) cars in conditions such as snow, mud, or wet tarmac. The weight of the engine over the driven wheels also improves grip in such conditions. However, powerful cars rarely use the FF layout because weight transference under acceleration reduces the weight on the front wheels and reduces their traction, limiting the torque which can be utilized. Electronic traction control can avoid wheelspin but largely negates the benefit of extra torque/power.

A transverse engine (also known as "east-west") is commonly used in FF designs, in contrast to FR which uses a longitudinal engine. The FF layout also restricts the size of the engine that can be placed in modern engine compartments, as FF configurations usually have Inline-4 and V6 engines, while longer engines such as Inline-6 and 90° V8 will rarely fit. This is another reason luxury/sports cars avoid the FF layout. Exceptions do exist, such as the Volvo S80 (FWD/4WD) which uses transversely mounted inline 6 and V8 engines, and the Ford Taurus, available with a 60° V8 and all-wheel drive.

Most Audis are FF layout cars, but with longitudinal engines, such as the Audi A4 and Audi A6; however "FrontTrak" front-wheel-drive models are only entry-level trims in the United States and Canada; most Audis usually come with "quattro" all-wheel drive. The Audi A3 is a FF layout car with a traverse engine mounting, as it does not share a platform with more expensive offerings in the marque.

Front-wheel drive gives more interior space since the powertrain is a single unit contained in the engine compartment of the vehicle and there is no need to devote interior space for a driveshaft tunnel or rear differential, increasing the volume available for passengers and cargo. There are some exceptions to this as rear engine designs do not take away interior space (see Porsche 911, and Volkswagen Beetle). It also has fewer components overall and thus lower weight The direct connection between engine and transaxle reduces the mass and mechanical inertia of the drivetrain compared to a rear-wheel-drive vehicle with a similar engine and transmission, allowing greater fuel economy In front-wheel-drive cars the mass of the drivetrain is placed over the driven wheels and thus moves the centre of gravity farther forward than a comparable rear-wheel-drive layout, improving traction and directional stability on wet, snowy, or icy surfaces. Front-wheel-drive cars, with a front weight bias, tend to understeer at the limit which, according to Saab engineer Gunnar Larsson, is easier since it makes instinct correct in avoiding terminal oversteer, and less prone to result in fishtailing or a spin.

According to a sales brochure for the 1989 Lotus Elan, the ride and handling engineers at Lotus found that "for a given vehicle weight, power and tyre size, a front-wheel-drive car was always faster over a given section of road." However, this may only apply for cars with moderate power-to-weight ratio. According to road test with two Dodge Daytonas, one FWD and one RWD, the road layout is also important for what configuration is the fastest.

Weight shifting limits the acceleration of a front-wheel-drive vehicle. During heavy acceleration, weight is shifted to the back, improving traction at the rear wheels at the expense of the front driving wheels; consequently, most racing cars are rear-wheel drive for acceleration. However, since front-wheel-drive cars have the weight of the engine over the driving wheels, the problem only applies in extreme conditions in which case the car understeers. On snow, ice, and sand, rear-wheel drive loses its traction advantage to front or all-wheel-drive vehicles which have greater weight over the driven wheels. Rear-wheel-drive cars with rear engine or mid engine configuration retain traction over the driven wheels, although fishtailing remains an issue on hard acceleration while in a turn. Some rear engine cars (e.g., Porsche 911) can suffer from reduced steering ability under heavy acceleration, since the engine is outside the wheelbase and at the opposite end of the car from the wheels doing the steering. A rear-wheel-drive car's centre of gravity is shifted rearward when heavily loaded with passengers or cargo, which may cause unpredictable handling behavior.

On FR cars, the long driveshaft adds to drivetrain elasticity.