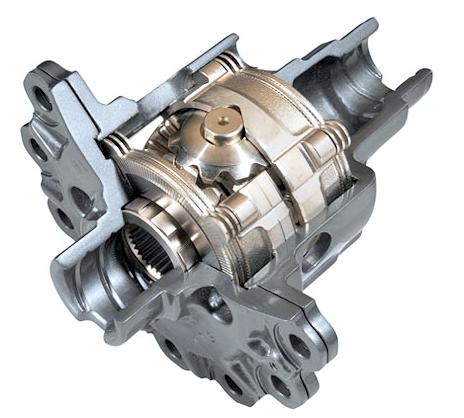 A limited-slip differential (LSD) is a type of automotive differential gear arrangement that allows for some difference in angular velocity of the output shafts, but imposes a mechanical bound on the disparity.

In an automobile, such limited-slip differentials are sometimes used in place of a standard differential, where they convey certain dynamic advantages, at the expense of greater complexity.

It is commonly referred to as an "LSD" by today's automobile enthusiasts.

In 1932, Ferdinand Porsche designed a Grand Prix racing car for the Auto Union company. The high power of the design caused one of the rear wheels to experience excessive wheel spin at any speed up to 100 mph (160 km/h). In 1935, Porsche commissioned the engineering firm ZF to design a limited-slip differential that would perform better. The ZF "sliding pins and cams" became available, and one example was the Type B-70 for early VWs.

The main advantage of a limited-slip differential is demonstrated by considering the case of a standard (or "open") differential in off-roading situations where one wheel has no contact with the ground. In such a case (with a standard differential), the non-contacting wheel will receive 100% of the power, while the contacting wheel will remain stationary. The torque transmitted will be equal at both wheels, and therefore, will not exceed the threshold of torque needed to move the wheel with grip. In this situation, a limited-slip differential prevents 100% of the power from being allocated to one wheel, and thereby keeping both wheels in powered rotation.

Automotive limited-slip differentials all contain a few basic elements. First, all have a gear train that, like an open differential, allows the output shafts to spin at different speeds while holding the sum of their speeds proportional to that of the input shaft.

Second, all have some sort of mechanism that applies a torque (internal to the differential) that resists the relative motion of the output shafts. In simple terms, this means they have some mechanism which resists a speed difference between the outputs, by creating a resisting torque between either the two outputs, or the outputs and the differential housing. There are many mechanisms used to create this resisting torque. The type of limited-slip differential typically gets its name from the design of this resisting mechanism. Examples include viscous and clutch-based LSDs. The amount of limiting torque provided by these mechanisms varies by design and is discussed later in the article.

An open differential has a fixed torque split between the input and outputs. In most cases the relationship is:

Thus the wheels always see the same torque even when spinning at different speeds, including the case where one is stationary. Note, the torque split can be unequal, though 50:50 is typical.

The torque delivered to the outputs is:

When traveling in a straight line, where one wheel starts to slip (and spin faster than the wheel with traction), torque is reduced to the slipping wheel (Trq 2 ) and provided to the slower wheel (Trq 1 ).

When both wheels are spinning at the same speed, the torque distribution to each wheel is:

This means the maximum torque to either wheel is statically indeterminate but is in the range of ½ Trq in ±( ½ Trq d ).

Several types of LSD are commonly used on passenger cars.

This category includes helical gear limited-slip differentials and clutch, cone (an alternative type of clutch) where the engagement force of the clutch is a function of the input torque applied to the differential (as the engine applies more torque the clutches grip harder and Trq d increases).

Torque sensing LSDs respond to driveshaft torque, so that the more driveshaft input torque present, the harder the clutches, cones or gears are pressed together, and thus the more closely the drive wheels are coupled to each other. Some include spring loading to provide some small torque so that with little or no input torque (trailing throttle/gearbox in neutral/main clutch depressed) the drive wheels are minimally coupled. The amount of preload (hence static coupling) on the clutches or cones are affected by the general condition (wear) and by how tightly they are loaded.

One method for creating the clamping force is the use of a cam-ramp assembly such as used in a Salisbury/ramp style LSD. The spider gears mount on the pinion cross shaft which rests in angled cutouts forming cammed ramps. The cammed ramps are not necessarily symmetrical. If the ramps are symmetrical, the LSD is 2 way. If they are saw toothed (i.e. one side of the ramp is vertical), the LSD is 1 way. If both sides are sloped, but are asymmetric, the LSD is 1.5 way. (See the discussion of 2, 1.5 and 1 way below)

An alternative is to use the natural separation force of the gear teeth to load the clutch. An example is the center differential of the 2011 Audi Quattro RS 5.

As the input torque of the driveshaft tries to turn the differential center, internal pressure rings (adjoining the clutch stack) are forced sideways by the pinion cross shaft trying to climb the ramp, which compresses the clutch stack. The more the clutch stack is compressed, the more coupled the wheels are. The mating of the vertical ramp (80–85° in practice to avoid chipping) surfaces in a one-way LSD on overrun produces no cam effect or corresponding clutch stack compression.

Broadly speaking, there are three input torque states: load, no load, and overrun. During load conditions, as previously stated, the coupling is proportional to the input torque. With no load, the coupling is reduced to the static coupling. The behavior on overrun (particularly sudden throttle release) determines whether the LSD is 1 way, 1.5 way, or 2 way.

A 1-way differential will provide its limiting action in only one direction. When torque is applied in the opposite direction it behaves like an open differential. In the case of a FWD car it is argued to be safer than a 2-way differential. The argument is if there is no additional coupling on overrun, i.e. a 1-way LSD as soon as the driver lifts the throttle, the LSD unlocks and behaves somewhat like a conventional open differential. This is also the best for FWD cars, as it allows the car to turn in on throttle release, instead of ploughing forward.

A 1.5-way differential refers to one where the forward and reverse limiting torques, Trq d_fwd, d_rev , are different but neither is zero as in the case of the 1-way LSD. This type of differential is common in racing cars where a strong limiting torque can aid stability under engine braking.

Geared, torque-sensitive mechanical limited-slip differentials use helical gears or worm gears rather than the beveled spider gears of the clutch based differentials. As torque is applied to the gears, they are pushed against the walls of the differential housing, creating friction. The friction resists the relative movement of the outputs and creates the limiting torque Trq d .

The viscous type is generally simpler because it relies on hydrodynamic friction from fluids with high viscosity. Silicone-based oils are often used. Here, a cylindrical chamber of fluid filled with a stack of perforated discs rotates with the normal motion of the output shafts. The inside surface of the chamber is coupled to one of the driveshafts, and the outside coupled to the differential carrier. Half of the discs are connected to the inner, the other half to the outer, alternating inner/outer in the stack. Differential motion forces the interleaved discs to move through the fluid against each other. In some viscous couplings when speed is maintained the fluid will accumulate heat due to friction. This heat will cause the fluid to expand, and expand the coupler causing the discs to be pulled together resulting in a non-viscous plate to plate friction and a dramatic drop in speed difference. This is known as the hump phenomenon and it allows the side of the coupler to gently lock. In contrast to the mechanical type, the limiting action is much softer and more proportional to the slip, and so is easier to cope with for the average driver. New Process Gear used a viscous coupling of the Ferguson style in several of their transfer cases including those used in the AMC Eagle.

Viscous LSDs are less efficient than mechanical types, that is, they "lose" some power. In particular, any sustained load which overheats the silicone results in sudden permanent loss of the differential effect They do have the virtue of failing gracefully, reverting to semi-open differential behavior. Typically a visco-differential that has covered 60,000 miles (97,000 km) or more will be functioning largely as an open differential;this is a known weakness of the original Mazda MX-5 (a.k.a. Miata) sports car. The silicone oil is factory sealed in a separate chamber from the gear oil surrounding the rest of the differential. This is not serviceable; when the differential's behavior deteriorates, the VLSD center must be replaced.

This style limited-slip differential works by using a gerotor pump to hydraulically compress a clutch to transfer torque to the wheel that is rotating the slowest. The gerotor pump uses the differential carrier or cage to drive the outer rotor of the pump and one axle shaft to drive the inner rotor. When there is a difference between the left and right wheels' speed, the pump pressurizes the hydraulic fluid causing the clutch to compress. thereby causing the torque to be transferred to the wheel that is rotating the slowest. These pump-based systems have a lower and upper limits on applied pressure which allows the differential to work like a conventional or open differential until there is a significant speed difference between the right and left wheel, and internal damping to avoid hysteresis. The newest gerotor pump based system has computer regulated output for more versatility and no oscillation. Empty citation‎ (help)

An electronic limited-slip differential will typically have a planetary or bevel gear set similar to that of an open differential and a clutch pack similar to that in a torque sensitive or gerotor pump based differential. In the electronic unit the clamping force on the clutch is controlled externally by a computer or other controller. This allows the control of the differential’s limiting torque, Trq d , to be controlled as part of a total chassis management system. An example of this type of differential is Subaru’s DCCD used in the 2011 Subaru WRX STi. Another example is the Porsche PSD system used on the Porsche 928. A third example is the SAAB XWD (Haldex Generation 4) with eLSD, it uses a common (electronically controlled via the vehicle computer network) hydraulic power pack to control both the longitudinal and transversal torque transfer of the XWD system. The same Haldex system is used on several other GM Epsilon based vehicles such as the Cadillac SRX etc.

These systems are alternatives to a traditional limited-slip differential. The systems harness various chassis sensors such as speed sensors, anti-lock braking system (ABS) sensors, accelerometers, and microcomputers to electronically monitor wheel slip and vehicle motion. When the chassis control system determines a wheel is slipping, the computer applies the brakes to that wheel. A significant difference between the limited-slip differential systems listed above and this brake-based system, is that brake-based systems do not inherently send the greater torque to the slower wheel.

BMW's electronic limited-slip differential used on the 2012 535i is an example of such a system.