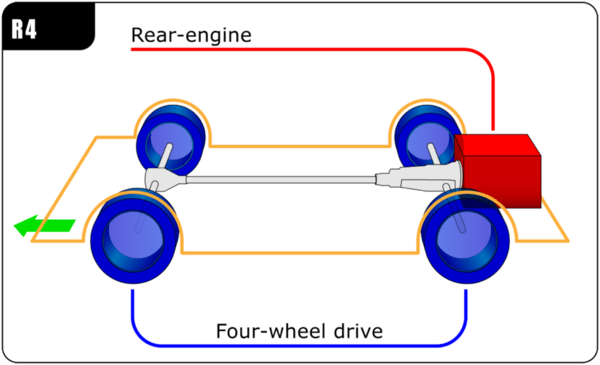 In automotive design, an R4, or Rear-engine, Four-wheel-drive layout places the internal combustion engine at the rear of the vehicle, and drives all four roadwheels.

This layout is typically chosen to improve the traction or the handling of existing vehicle designs using the rear-engine, rear-wheel-drive layout (RR).

Notable vehicles with the R4 layout include several high-performance Porsche sports cars, including the 959, the 911 Turbo since the introduction of the turbocharged version of the 993 series in 1995, and the 911 Carrera 4 introduced with the 964 series in 1989.

Some Volkswagen Kübelwagen (the rear-engined beetle-based military vehicle used by Germany in World War II) variants were produced with 4-wheel or all-wheel drive, including the Type 86, Type 87, Type 98.