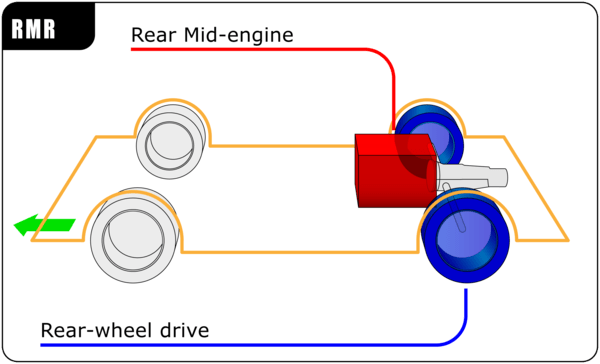 In automotive design, a RMR or Rear Mid-engine, Rear-wheel-drive layout is one in which the rear wheels are driven by an engine placed just in front of them, behind the passenger compartment. In contrast to the rear-engined RR layout, the center of mass of the engine is in front of the rear axle. This layout is typically chosen for its low moment of inertia and relatively favorable weight distribution (the heaviest component is near the center of the car, making the main component of its moment of inertia relatively low). The layout has a tendency toward being heavier in the rear than the front, which allows for best balance to be achieved under braking. However, since there is little weight over the front wheels, under acceleration, the front of the car is prone to lift and cause understeer. Most rear-engine layouts have historically been used in smaller vehicles, because the weight of the engine at the rear has an adverse effect on a larger car's handling, making it 'tail-heavy'.[1] It is felt that the low polar inertia is crucial in selection of this layout. The mid-engined layout also uses up central space, making it impractical for any but two-seater sports cars. However, some microvans use this layout, with a small, low engine beneath the loading area. This makes it possible to move the driver right to the front of the vehicle, thus increasing the loading area at the expense of slightly reduced load depth.

In modern racing cars, RMR is the usual configuration and is usually synonymous with "mid engine". Due to its favorable weight dynamics, this layout is heavily employed in Formula racing cars (such as Formula One and IndyCar). This configuration was also common in very small engined 1950s microcars, in which the engines did not take up much space. Because of successes in racing, the RMR platform has been popular for road-going sports cars despite the inherent challenges of design, maintenance and lack of cargo space. 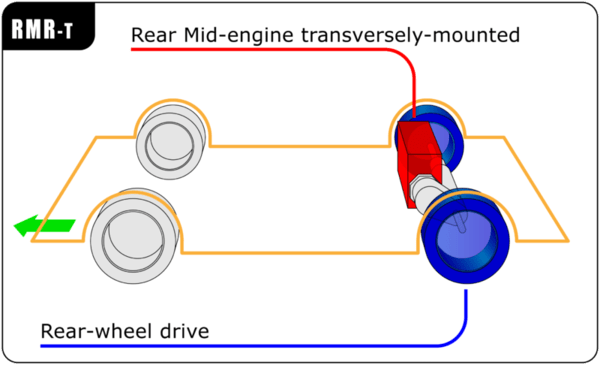 The 1923 Benz Tropfenwagen was the first race car with mid-engine, rear-wheel-drive layout. It was based on an earlier design named the Rumpler Tropfenwagen in 1921 made by Edmund von Rumpler, an Austrian engineer working at Daimler. The Benz Tropfenwagen was designed by Ferdinand Porsche along with Willy Walb and Hans Nibel. It raced in 1923 and 1924 and was most successful in the Italian Grand Prix in Monza where it stood fourth. Later, Ferdinand Porsche used mid-engine design concept towards the Auto Union Grand Prix cars of the 1930s which became the first winning RMR racers. They were decades before their time, although MR Miller Specials raced a few times at Indianapolis between 1939 and 1947. In 1953 Porsche premiered the tiny and altogether new RMR 550 Spyder and in a year it was notoriously winning in the smaller sports and endurance race car classes against much larger cars—a sign of greater things to come. The 718 followed similarly in 1958. But it was not until the late 1950s that RMR reappeared in Grand Prix (today's "Formula One") races in the form of the Cooper-Climax (1957), soon followed by cars from BRM and Lotus. Ferrari and Porsche soon made Grand Prix RMR attempts with less initial success. The mid-engined layout was brought back to Indianapolis in 1961 by the Cooper Car Company with Jack Brabham running as high as third and finishing ninth. Cooper did not return, but from 1963 on British built mid-engined cars from constructors like Brabham, Lotus and Lola competed regularly and in 1965 Lotus won Indy with their Type 38.

Finally in 1966 the Lamborghini Miura was the first mid-engine, rear-wheel-drive roadcar. The concept behind the Miura was that of putting on the road a grand tourer featuring state of the art racing car technology of the time; hence the Miura was powered by a V12 transversally mounted between the rear wheels, solidal to the gearbox and differential. An extremely innovative sportscar at a time when all of its competitors (aside from the rear-engined Porsches), from Ferraris to Aston Martins, were traditional front-engined, rear wheel drive grand tourers.