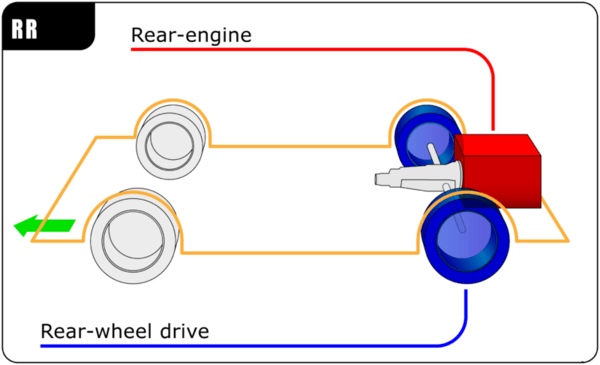 In automotive design, a RR, or Rear-engine, Rear-wheel-drive layout places both the engine and drive wheels at the rear of the vehicle. In contrast to the RMR layout, the center of mass of the engine is between the rear axle and the rear bumper.

Most of the traits of the RR configuration are shared with the MR. Placing the engine near the driven rear wheels allows for a physically smaller, lighter, less complex, and more efficient drivetrain, since there is no need for a driveshaft, and the differential can be integrated with the transmission, commonly referred to as a transaxle.

Since the engine is typically the heaviest component of the car, putting it near the rear axle usually results in more weight over the rear axle than the front, commonly referred to as a rear weight bias. The farther back the engine, the greater the bias. Typical weight bias for an FR is 55/45 front/rear; for MR, 45/55; for RR, 35/65. Rear weight bias reduces forward weight transfer under braking, and increases rear weight transfer under acceleration. The former means that traction is more evenly distributed among all four wheels under braking, resulting in shorter stopping times and distances. The latter means that the driven wheels have increased traction when accelerating, allowing them to put more power on the ground and accelerate faster.

The disadvantage to a rear weight bias is that the car can become unstable and tend to oversteer when decelerating (whether braking or lifting off the throttle). In turns, this tendency is much more pronounced, to the point that even letting off the throttle slightly while turning can cause the rear tires to suddenly lose grip, and the vehicle to slide rear-first (see lift-off oversteer). When this happens, rotational inertia dictates that the added weight away from the axis of rotation (generally the steering wheels) will be more likely to maintain the spin, especially under braking. This is an inherent instability in the design, making it easier to induce and more difficult to recover from a slide than in a less rear-weight-biased vehicle. All cars regardless of drivetrain layout obey the same laws of physics and can do this, but it is much easier to do and harder to correct in MR and RR vehicles, with the result that many are unsafe to drive to their limits by average drivers (notable examples include the early Porsche 911, earlier years of the Toyota MR2, and the Chevrolet Corvair). A skilled driver, however, can corner faster by taking advantage of this tendency to oversteer, and is also more likely to take turns at a correct speed by braking before turning, and maintaining slight acceleration through the turn. At the end of the turn, the rear weight bias allows for increased rear traction when accelerating, allowing the driver to accelerate sooner, a major advantage in racing.

When not braking, the decreased weight over the front wheels means less traction, resulting in the car having a tendency to understeer, which is safer and more stable (further allowing a driver to get on full throttle sooner) but is undesirable in cornering. To counteract this, it is necessary to induce forward weight transfer to increase front grip, but this significantly destabilizes the car and can be hard to do properly, that is, without spinning. High-performance driving necessitates inducing weight transfer, regardless of drivetrain layout, but it is more important in MR and especially RR layouts, and the greater effect from it is more difficult to handle.

In these respects, an RR can be considered to be an exaggeration of MR - harder braking, faster and earlier acceleration, and increased oversteer, but faster turning if it can be controlled.

In off road and low-traction situations, the RR layout has some advantages compared to other 2WD layouts. The weight is biased towards the driven wheels- as with FF vehicles. This both improves drive wheel traction and reduces the tendency for the undriven wheels to dig in. In addition, the driving and steering requirements are split between front and rear- as with FR vehicles- making it less likely for either to lose traction. Many dune buggies successfully use a Volkswagen beetle as the donor car for this reason. The relative simplicity and light weight compared to 4WD can therefore sometimes outweigh the disadvantage of only having two driven wheels.

Where RR differs from MR is in that the engine is located outside the wheelbase. The major advantage of MR - low moment of inertia - is negated somewhat (though still lower than FR), and there is more room for passengers and cargo (though usually less than FR). Furthermore, because both axles are on the same side of the engine, it is technically more straightforward to drive all four wheels, than in a mid-engined configuration (though there have been more high-performance cars with the M4 layout than with R4). Finally, a rear-mounted engine has empty air (often at a lower pressure) behind it when moving, allowing more efficient cooling for air-cooled vehicles (more of which have been RR than liquid-cooled, such as the Volkswagen Beetle, and one of the few production air-cooled turbocharged cars, the Porsche 930).

For liquid-cooled vehicles, however, this layout presents a disadvantage, since it requires either increased coolant piping from a front-mounted radiator (meaning more weight and complexity), or relocating the radiator(s) to the sides or rear, and adding air ducting to compensate for the lower airflow at the rear of the car.

Due to the handling difficulty, the need for more space efficiency, and the near ubiquitous use of liquid-cooled engines in modern cars, most manufacturers have abandoned the RR layout. The major exception is Porsche, who have developed the 911 for over 40 years and have taken advantage of the benefits of RR while mitigating its drawbacks to acceptable levels, lately with the help of electronic aids.

One of first RR cars was Tatra 77, first serial-produced aerodynamic car. Tatra used this layout until end of production of T700 in 1999. In case of T613 and T700 Tatra used layout with engine above rear axle, which reduced some disadvantages of RR layout.

Porsche has continued to develop its 911 model as a rear-engined vehicle, although they have introduced multiple all-wheel-drive models. Most notably, the 911 Turbo has been sold as AWD-only since the release of the 993 model. Race-oriented models such as the GT3 and twin-turbocharged GT2 remain solely RR, however.

Another manufacturer to implement the RR configuration was the De Lorean Motor Company with its DMC-12 sports car. To compensate for the uneven (35/65) weight distribution caused by the rear-mounted engine, De Lorean used rear wheels with a diameter slightly greater than the front wheels. Other than the Porsche 911, the last mass-produced RR configured car, at least in Europe, is the Smart Fortwo. Before that was the rear-engined Škoda's from Škoda 1000MB (produced from 1964) to Škoda 130/135/136 (produced until 1990) or the Polski Fiat 126p (produced until October 2000).

A range of sports road cars and racing cars with the RR layout was produced by the French company Alpine. These had bodies made of composite materials and used mechanical components made by Renault. (Alpine was eventually acquired by Renault; the A610 was a Renault product that used the Alpine name.) The Ariel Atom, a high performance sports car, uses an RR layout as a result of its "exoskeletal" design.

Some modern electric cars such as the Mitsubishi i-MiEV and Tesla Model S use an RR layout due to the low weight and cooling requirements of the electric motor.

Most modern heavy duty buses use an extreme RR layout. In transit buses this can be used to make a very low floor level in the first two-thirds of the bus, thus making disabled access much easier.

Most tour buses and coaches also employ a similar design, however the free space is usually used for luggage, and sometimes airconditioning equipment.

The Tata Nano, the cheapest ($2500) production car in the world introduced in 2008 and built in India, also featured this layout.