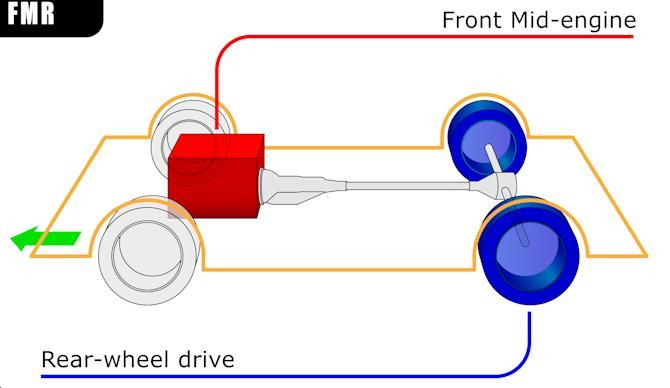 Rear-wheel drive (RWD) typically places the engine in the front of the vehicle and the driven wheels are located at the rear, a configuration known as front-engine, rear-wheel drive layout (FR layout). The front mid-engine, rear mid-engine and rear engine layouts are also used. This was the traditional automobile layout for most vehicles up until the 1970s and 1980s. Nearly all motorcycles and bicycles use rear-wheel drive as well, either by driveshaft, chain, or belt, since the front wheel is turned for steering, and it would be very difficult and cumbersome to "bend" the drive mechanism around the turn of the front wheel. A relatively rare exception is with the 'moving bottom bracket' type of recumbent bicycle, where the entire drivetrain, including pedals and chain, pivot with the steering front wheel.

The vast majority of rear-wheel-drive vehicles use a longitudinally-mounted engine in the front of the vehicle, driving the rear wheels via a driveshaft linked via a differential between the rear axles. Some FR layout vehicles place the gearbox at the rear, though most attach it to the engine at the front.

The FR layout is often chosen for its simple design and good handling characteristics. Placing the drive wheels at the rear allows ample room for the transmission in the centre of the vehicle and avoids the mechanical complexities associated with transmitting power to the front wheels. For performance-oriented vehicles, the FR layout is more suitable than front-wheel-drive designs, especially with engines that exceed 200 horsepower. This is because weight transfers to the rear of the vehicle during acceleration, which loads the rear wheels and increases their grip.

Another advantage of the FR layout is relatively easy access to the engine compartment, as result of the longitudinal orientation of the drivetrain, as compared to the FF layout (front-engine, front-wheel drive). Powerful engines such as the Inline-6 and 90° big-bore V8 are usually too long to fit in a FF transverse engine ("east-west") layout; the FF configuration can typically accommodate at the maximum an Inline-4 or V6. This is another reason luxury/sports cars almost never use the FF layout.