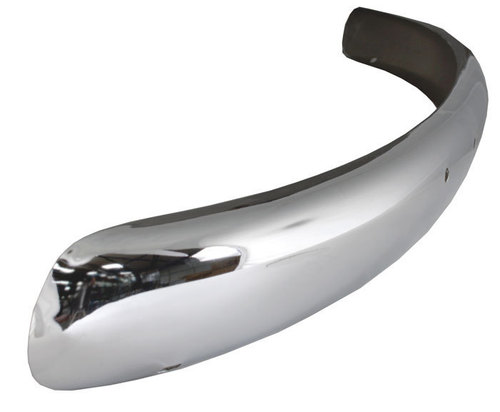 In automobiles, a bumper is the front-most or rear-most part, ostensibly designed to allow the car to sustain an impact without damage to the vehicle's safety systems. They are not capable of reducing injury to vehicle occupants in high-speed impacts, but are increasingly being designed to mitigate injury to pedestrians struck by cars.

In most jurisdictions, bumpers are legally required on all vehicles. The height and placement of bumpers may be legally specified as well, to ensure that when vehicles of different heights are in an accident, the smaller vehicle will not slide under the larger vehicle.

In 1971, the U.S. National Highway Traffic Safety Administration (NHTSA) issued the country's first regulation applicable to passenger car bumpers. Federal Motor Vehicle Safety Standard No. 215 (FMVSS 215), "Exterior Protection," took effect on 1 September 1972 — when most automakers would begin producing their model year 1973 vehicles. The standard prohibited functional damage to specified safety-related components such as headlamps and fuel system components when the vehicle is subjected to barrier crash tests at 5 miles per hour (8 km/h) for front and 2.5 mph (4 km/h) for rear bumper systems. In October 1972, the U.S. Congress enacted the Motor Vehicle Information and Cost Saving Act (MVICS), which required NHTSA to issue a bumper standard that yields the "maximum feasible reduction of cost to the public and to the consumer".Factors considered included the costs and benefits of implementation, the standard's effect on insurance costs and legal fees, savings in consumer time and inconvenience, and health and safety considerations.

The 1973 model year passenger cars sold in the U.S. used a variety designs. They ranged from non-dynamic versions with solid rubber guards, to "recoverable" designs with oil and nitrogen filled telescoping shock-absorbers.The standards were further beefed up for the 1974 model year passenger cars with standardized height front and rear bumpers that could take angle impacts at 5-mile-per-hour (8 km/h) with no damage to the car's lights, safety equipment, and engine. This often meant additional overall vehicle length, as well as new front and rear designs to incorporate the stronger energy absorbing bumpers.

The requirements promulgated under MVICS were consolidated with the requirements of Federal Motor Vehicle Safety Standard Number 215 (FMVSS 215, "Exterior Protection of Vehicles") and promulgated in March 1976. This new bumper standard was placed in the United States Code of Federal Regulations at 49CFR581, separate from the Federal Motor Vehicle Safety Standards at 49CFR571. The new requirements, applicable to 1979-model year passenger cars, were called the Phase I standard. At the same time, a zero-damage requirement, Phase II, was enacted for bumper systems on 1980 and newer cars. The most rigorous requirements applied to 1980 through 1982 model vehicles; 5 miles per hour (8 km/h) front and rear barrier and pendulum crash tests were required, and no damage was allowed to the bumper beyond a 3⁄8 in (10 mm) dent and 3⁄4 in (19 mm) displacement from the bumper's original position. 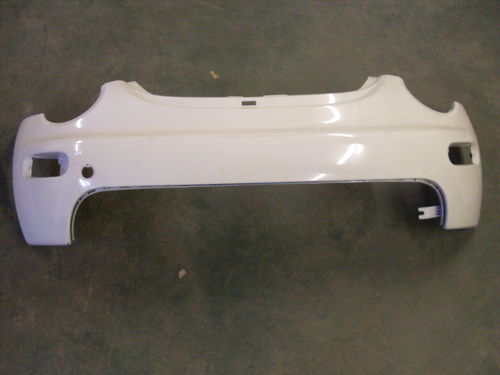 Facing pressure from automakers, and operating under the Reagan administration's pledge to reduce regulatory burdens on industry, NHTSA most recently amended the bumper standard in May 1982, halving the front and rear crash test speeds for 1983 and newer car bumpers from 5 miles per hour (8 km/h) to 2.5 miles per hour (4 km/h), and the corner crash test speeds from 3 miles per hour (5 km/h) to 1.5 miles per hour (2 km/h). In addition, the zero-damage Phase II requirement was rolled back to the damage allowances of Phase I. At the same time, a passenger car bumper height requirements of 16 to 20 inches (41–51 cm) was established for passenger cars.At that time, NHTSA promised to conduct research and testing to provide consumers with accurate information on the quality of new car bumpers, but no such information has been provided.

Consumer and insurance groups have decried the weakened bumper standard, saying it has increased consumer costs without any attendant benefits except to automakers.

In 1986, Consumers Union petitioned NHTSA to return to the Phase II standard and disclose bumper strength information to consumers. In 1990, NHTSA rejected that petition.

The weakened regulations permitted automakers to design bumpers with emphasis on style and low cost; protection dropped substantially and repair costs rose. In 1990, IIHS conducted four crash tests on three different-year examples of the Plymouth Horizon. The results illustrated the effect of the changes to the U.S. bumper regulations (repair costs quoted in 1990 United States dollars):

Canada's bumper standard, first enacted at the same time as that of the United States, was generally similar to the U.S. regulation. However, the Canadian standard was not weakened from 8 km/h (5 mph) to 4 km/h (2.5 mph) in accord with the weakened U.S. standard of 1983. Some automakers chose to provide stronger Canadian-specification bumpers throughout the North American market, while others chose to provide weaker bumpers in the U.S. market, which hampered private importation of vehicles from the U.S. to Canada.

In early 2009, Canada's regulation shifted to harmonize with U.S. Federal standards and international ECE regulations. Consumer groups are upset with the change,but Canadian regulators assert that the 4 km/h (2.5 mph) test speed is used worldwide and is more compatible with improved pedestrian protection in vehicle-pedestrian crashes.

Cars were equipped with bulky, massive, heavy, protruding bumpers to comply with the bumper standards of the 1970s and early 1980s. By the late 1980s most bumpers were concealed by a painted thermoplastic fascia. The thermoplastic currently in use is a combination of polycarbonate and Acrylonitrile butadiene styrene called PC/ABS. The internal aspect of the bumper usually consists of a lightweight foam or polyurethane. This foam does not contribute to the impact absorption factor of the bumper, but serves as a filler and prevents the thermoplastic fascia from cracking upon impact.

Under the International safety regulations originally developed as European standards and now adopted by most countries outside North America, a car's safety systems must still function normally after a straight-on pendulum or moving-barrier impact of 4 km/h (2.5 mph) to the front and the rear, and to the front and rear corners of 2.5 km/h (1.6 mph) at 45.5 cm (18 in) above the ground with the vehicle loaded or unloaded