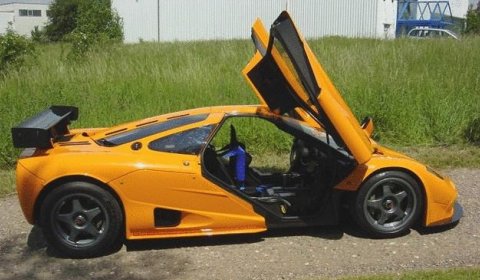 It was also a common feature for Group C and IMSA GTP/Camel Lights prototype racers as they incorporate teardrop top which allows the driver to get in and out of the car more quickly than conventional and gullwing doors, especially in a cramped pitlane environment such as the pre-1991 Le Mans circuit.

Since then, butterfly doors have been an adopted design of closed top sportscar racers, such as the Toyota GT-One, Bentley Speed 8 and more recently, the Peugeot 908 HDi FAP. The Toyota Sera, released in 1991, was a limited-release car designed exclusively for the Japanese market which used this design.

The Mercedes-Benz SLR McLaren Roadster was one of the few open top cars to use butterfly wing doors. This is made possible by having the doors hinged at the side of A-pillar instead of at top by the roof. The McLaren MP4-12C has a unique system where the butterfly doors do not use a top hinge meaning that the car can use frameless windows which allows for the cars upcoming convertible version to retain them.